Bodies Are Blocking the Entrance to Boeing

This story has been updated and reposted with more information.

A row of protesters dressed all in black have been lying in the road to prevent access to the Boeing parking lot since around 8 a.m., Slog tipper Mike Smith, who works in the area, wrote to tell us this morning. Stranger reporter Ansel Herz was also there, and he talked to protesters, Boeing workers, and Boeing PR.

Tukwila police and Boeing security are on the scene and have positioned their vehicles to prevent cars from running over the protesters.

"War profiteering has always gone on," said a fatalistic Boeing employee looking on, who works on the 777x and prefers not to be named. Still, he said he understands what the protesters are trying to achieve.

Meanwhile, another Boeing employee bellowed an epithet at the protesters out the window of his car, yelled at the private security guard, "Please get these motherfuckers out of the way! I need to get to work!" then made a U-turn and sped away, tires screeching.

Nathan Gerards, a contractor on his way into work, told Ansel, "Gaza has no one to blame but themselves. They're putting weapons in the schools."

The protesters represent the organization Jewish Voice for Peace, which this spring released this persuasive video about Sodastream, which manufactures all its products in Israeli-occupied territory and employs Palestinian workers who have essentially no rights and nowhere else to go.

The protesters today say Boeing must stop supplying missile systems, F15 software, Apache helicopters, and Joint Direct Attack Munitions to Israel, because those weapons are being used to commit war crimes. The vast majority of the Palestinians killed in the past two weeks have been civilians, according to the UN. (BBC has the latest reporting on the rising body count in Gaza: Hundreds of Palestinian civilians and at least three Israeli civilians have been killed. The disproportionality is part of what Jewish Voice for Peace is protesting.)

What exactly gets made at the Defense, Space and Security facility in Tukwila? Ansel heard varying stories from employees—one implying that he works on military projects but couldn't say what, another who said DSS is no longer based there at all.

Ansel asked Boeing for a response. 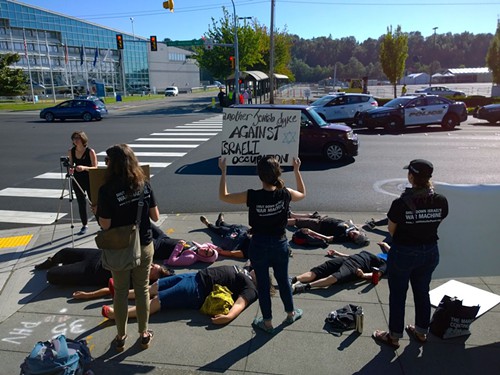 "I am not at liberty to elaborate on what is done at each of our sites and, no, we do not have a response beyond what I sent about helping to ensure the safety of those participating in the protest," e-mailed Boeing spokesman Todd Kelley. (The previous statement: "At this point, we are aware of the protest and we are working with Tukwila Police to ensure their safety at this busy intersection.")

Stefanie Fox is a member of Jewish Voice for Peace who was out there this morning. She described her own story to Ansel. A Jewish woman in search of a greater Jewish community than the one she could find in her hometown of Gig Harbor, she went to college at Swarthmore on the East Coast, and after her sophomore year, planned what is called a "birthright" heritage trip to Israel.

But the trip was abruptly canceled because of the start of the Second Intifada. The message was that Israelis, and Israel, was under attack and unsafe. "And I thought, the way that I'm being told to be scared, but I see who's dying [far more Palestinians than Israelis]—the numbers not adding up… that was the internal turning point," Fox said.

In college, she was already organizing against racism. After her trip was canceled, she began to notice similar dehumanizing rhetoric about Palestinians and Muslims among mainstream Americans, Christian zionist hawks, and Jewish people alike. "I thought, that sounds like racism," she said. A grad-school friend when she was studying community organizing for public health at the University of Washington years later introduced her to JVP, a varied group opposed to all killing of civilians, but one that puts "justice for Palestinians… at the center of the room instead of pushed off to the side."

From JVP's press statement this morning:

JVP demonstrators are creative. On July 17, they performed a protest at Pike Place Market intended to make direct links between American companies and taxpayers and dead Palestinian civilians, whose names and ages were given before they fell in the street. Video.

There's another protest today, at noon at Westlake, organized by people also fighting for Palestinian rights.

Saturday, the local Jafraa Dabke Team of dancers performed for an Artists for Gaza benefit. They danced their protest while fasting. Today is the Muslim holiday of Eid al-Fitr, when the fast is broken.

Comments 21
Tags: News Blogs
The Stranger depends on your continuing support to provide articles like this one. In return, we pledge our ongoing commitment to truthful, progressive journalism and serving our community. So if you’re able, please consider a small recurring contribution. Thank you—you are appreciated!
CONTRIBUTE NOW