Around a dozen protesters showed up at last night's Seattle School Board meeting, deeply concerned by the district's response so far to an incident that occurred last year at Garfield High School, in which a 15-year-old student reported to school officials, on an overnight nature field trip, that another student had raped her in a cabin. According to e-mails obtained by Al Jazeera as part of their in-depth reporting on the case, "the district attorney concluded that a sexual assault may have taken place, but it wasn’t a case that could be successfully prosecuted." Regardless, under Title IX, which prohibits federally funded schools from sex discrimination, there are clear protocols for how schools must handle sexual assault and harassment cases, and this victim's parents argue that the district did not follow them. The school district is now under federal investigation for the way they handled both the alleged assault and its aftermath, which drove the student out of school and eventually her family out of the state. Our own Dominic Holden has done some digging into this case as well, and his open questions for the district are definitely worth a read.

Last night's protestors had one pressing question of their own: Can parents, students, and citizens trust the district to adequately handle student complaints of sexual assault and sexual harassment?

The new interim schools superintendent, Larry Nyland, who's just taken over this summer after former superintendent José Banda left the district, announced that they'll be taking steps to "learn from this incident" and increase student safety. (Which, truth be told, is not very bold. In fact, it's the very least the school district can do.) You'll find part of his letter outlining the district's response after the jump (the whole thing is over here). But it was the comments of School Board President Sharon Peaslee, presented after protesters voiced their concerns, that captured even more attention from the crowd.

We will be reporting to the School Board Operations Committee tomorrow on all incidents involving students the past year. We are also working with the Office of Civil Rights and will give careful consideration to their recommendations for improvements in our compliance to ensure that we are clear and current in our efforts to protect student safety. I have asked a senior management working group to review all processes related to the requirements of Title IX on sexual harassment to improve our notices, training, investigation practices, compliance actions, and remedies for victims of sexual harassment. 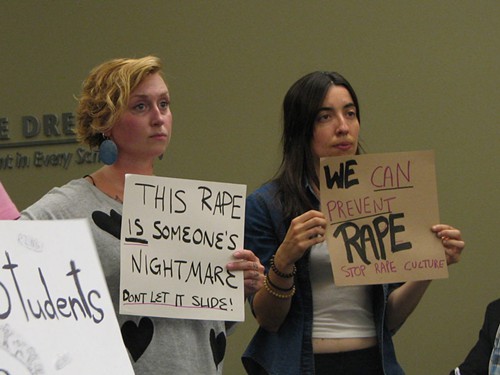 During the public comment portion of the meeting, a handful of people came to the mic to chastise the district, ask for more than a simple review of policies, and generally share their concern, discomfort, and outrage at how this case has played out. Dr Kelly Davis, a UW faculty member who has studied sexual violence, was among those urging the district to commission a task force that included voices from all over the community, from parents, students, and faculty to, for damn sure, some outside experts. Citing CDC statistics that "almost half of female rape victims are assaulted before age 18," she contended that given what we know about sexual assault, there's no way this is an "isolated incident."

Local activist Monisha Harrell presented a Change.org petition signed by more than 2,300 people arguing that Garfield's principal, Ted Howard, should be fired. "There must be a price for inaction," she said, "and that price should be steep enough to let all know that we have a zero tolerance policy for those who would endanger our children."

Sylvie Nemeth, a Garfield graduate from the class of 2013, shared information from a survey she'd conducted among fellow students on student attitudes toward rape. "I did the survey for my AP statistics class," she told me after the meeting. It was supposed to be a minor assignment, she said, but she thought "it would be a good opportunity to get some real data." So she handed out 119 surveys to fellow students, with questions like: "Do you think it is okay for Ryan to force Taylor (hypothetical names) to have sex with him/her if Taylor is wearing provocative clothing?" Then: If "Taylor first said yes and then changed his/her mind?" If "Ryan and Taylor have been dating for a long time?" If "Ryan and Taylor are in love?" On that last question, Nemeth's surveys showed, 11 percent of students answered "Yes." She also asked fellow students what percentage of rapes they thought were falsely reported. Twenty-three percent of respondents answered "about half," with 5 percent answering "more than half" and another 5 percent answering "most." (In reality, it's difficult to quantify, but scholars seem to put it somewhere in the single digits.)

The school board's comments after public testimony were by turns encouraging and depressing. Board Member Marty McClaren said this case is "of very deep concern" and added that she "deeply, deeply regret[s] whatever lapses have occurred on part of the district." Harium Martin-Morris said he "would like to state publicly that I am in favor of creating a task force" on the issue of sexual assault and prevention. Stephan Blanford, whose district includes Garfield and who says he expects that his own daughter will attend the school, said he's "deeply troubled" by this case. Sherry Carr looked out at the room and told people: "You are heard."

Then board president Sharon Peaslee opened her mouth. "I would also like to ask everyone," she said in her comments, "to please consider that we live in a society where everyone is innocent until proven guilty. There have been two criminal investigations around this and no one was charged. No one was charged with rape." There are facts in this case that are "unknown to almost everyone," she added.

Well, thank god someone's here to speak for the male student in the case—who, according to Al Jazeera's reporting, told school district investigators asking if the girl said anything during what he said was a consensual sexual encounter, "I did not pay attention to her that much." Peaslee is deeply, horrifyingly missing the point here. No one in the crowd was calling for a criminal prosecution—they were there out of concern for the behavior of the school district, which has been accused of a complete failure to follow protocol when it comes to a fair, equitable, timely investigation and good communication with the families involved. This is not just about these students, it's about the adults in the room failing to do their job.

Her comments were not taken well by audience members. "I was appalled," said Lydia Glassley, a 2014 graduate of Seattle's Nova High School. "That was awful." Nemeth, who conducted that student rape survey during her Garfield years, said, "I really appreciated some of the comments" by board members, especially those supporting a potential task force. But "the president's comments were pretty disheartening." She said it seemed like "a derailment tactic" from the issue at hand, which, again, is that the district has responsibilities under Title IX to adequately investigate allegations of assault and harassment, and that there needs to be a whole lot more training and education on the issue.

Also: It sounds like Peaslee needs to be introduced to I believe you | It's not your fault.

Comments 35
Tags: News Blogs Education
The Stranger depends on your continuing support to provide articles like this one. In return, we pledge our ongoing commitment to truthful, progressive journalism and serving our community. So if you’re able, please consider a small recurring contribution. Thank you—you are appreciated!
CONTRIBUTE NOW