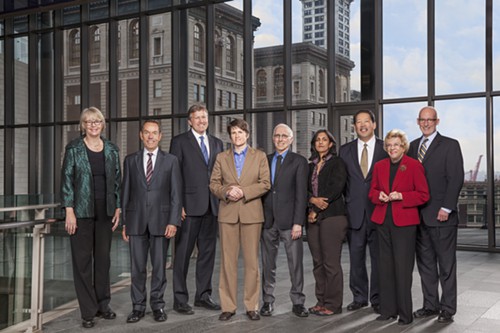 This week a majority of your Seattle City Council has decided to attend a retreat at the upscale Suncadia Resort in Cle Elum. The event is run by the Seattle Chamber of Commerce and, according to former Seattle Mayor Mike McGinn, it's a good example of how "powerful interests use their money and influence to obtain a very high level of access to elected officials."

Five council members—Tim Burgess, Sally Bagshaw, Sally Clark, Tom Rasmussen, and Nick Licata—are at Suncadia right now, enjoying a setting that's described on the resort web site as offering "sun-dappled meadows and rushing rivers," "miles of hiking and biking trails," "spa treatments and therapies," and "thirty-six holes of mountain golf." And maybe they're doing some work, too? (UPDATE: Payment was made for Bruce Harrell to attend, but his office says he had a death in the family and is not attending.)

Council member Kshama Sawant, who's sitting this one out along with Council members Jean Godden and Mike O'Brien, said in a statement that the Suncadia retreat is "a clear display of brazen corporate favoritism." Pointing to fast-rising Seattle rents and a lack of affordable housing in Seattle, Sawant charged that "rather than urgently addressing this crisis, Councilmembers and the Mayor are all set to deliver a 'business as usual' budget."

The Council is currently in the midst of what City Hall insiders call budget season, a three month period from September to November when the council negotiates and ultimately approves the city's financial plan for the following year. On the council's budget calendar, Wednesday, Thursday, and Friday of this week are blocked out with the words, "Chamber Retreat."

Council member Jean Godden, who is not attending, says when she first joined the council in 2004, the staff "didn’t schedule the budget around the Suncadia conference." (The conference has been held annually since 1987.) Godden also pointed out that during her second term, when she chaired a committee responsible for putting the budget together, she didn't go to Suncadia. "It seemed important for me to stay at City Hall and focus on budget," Godden said. "This is just the way I operate: buckle down and check into the details. The budget, after all, is probably the most important work we do.” Nick Licata, the current budget chair, is at Suncadia.

Each attending council member is spending $1,350 in public money to attend, according to Kirstan Arestad, the Director of Council Central Staff. The money comes from the council's travel budget and, Arestad said, "covers the registration fee, the lodging, and most meals." The members now at Suncadia will be staying all three days, according to council staffers, and City Council invoices show their retreat fees have been paid directly to the Seattle Metropolitan Chamber of Commerce. (Mayor Ed Murray will be there as an invited speaker this afternoon, and King County Executive Dow Constantine was there yesterday.)

O'Brien wouldn't comment on why he's not attending. But former Mayor Mike McGinn, who went to Suncadia conferences when he was in office, said he worries about their downside.

"I've attended these conferences," McGinn said in an e-mail. "Good work can get done, and so can absolutely awful work. The retreat is definitely part of how powerful interests use their money and influence to obtain a very high level of access to elected officials."

The Chamber of Commerce has not responded to repeated requests for comment.

On its website, the Chamber describes the event as focusing on "three investments that have the most significant impact on improving our rankings [compared to competitive cities] and increasing our global competitiveness: Develop and market a global brand; Create an economic initiative to increase foreign direct investment; Double the capacity to deliver higher education focused on STEM degrees."

Keynote speakers, according to the web site, include Kevin Schemm, CFO and VP of Finance and Strategy for Boeing Commercial Airplanes, and Brad Tilden, Chairman, President, and CEO of Alaska Airlines.

Sawant described the whole thing as a scandal and said she knows what her council colleagues are up to. "Let’s be honest," she said. "They are also taking down their next marching orders from the Chamber."

Council President Tim Burgess declined to explain the value of the retreat and did not respond to Sawant's statements.

"In contrast to the Chamber retreat, I am going to hold a People's Budget Hearing October 30th at 6:00 p.m. in City Hall," the socialist city council member says. "So that working people, human service providers, immigrant and people of color communities, social and economic justice organizations, and small businesses can talk about their needs and how we can fund them."

Meantime, here's a list of the Chamber Retreat's sponsors:

Comments 60
Tags: News Blogs Politics
The Stranger depends on your continuing support to provide articles like this one. In return, we pledge our ongoing commitment to truthful, progressive journalism and serving our community. So if you’re able, please consider a small recurring contribution. Thank you—you are appreciated!
CONTRIBUTE NOW