Remember Slog tipper Doug and the construction sign that a contractor for SDOT placed smack dab in the middle of a bike trail?

SDOT apologized and swiftly fixed it.

But poor ol' Doug keeps running up on big trucks in bike lanes. First there was this UPS truck blocking the bike lane heading south on Eastlake Avenue during his morning commute on October 7:

And further down on the same street, he says he's twice run into this Dunbar armored truck, on October 7 and 12, squatting in the bike lane in roughly the same spot: 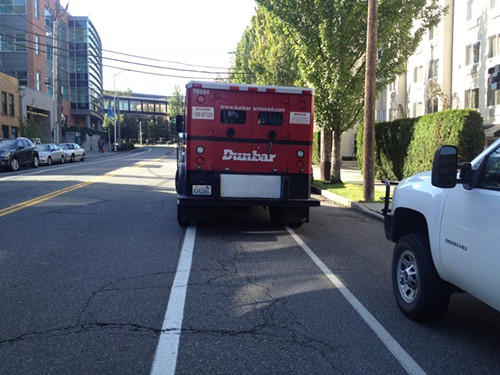 Doug is fed up. "Two weeks ago I e-mailed the company asking the drivers not to use the bike lane as a parking spot," he said. "I got no response."

PEOPLE: Blocking these lanes is illegal. "We will reach out to this company and remind them about the rules around legal parking," SDOT spokesman Rick Sheridan told me when I asked about this. (There are no special exemptions for armored trucks that I can find, if you were wondering.)

Seattle Police Department spokesperson Patrick Michaud says that as a patrol officer, he used to regularly cite drivers for parking in the bike lane on 12th Avenue on Capitol Hill—minimum $124 fine, $191 if the blockage causes a collision. (Earlier this summer, in that same bike lane, I found the path blocked by a delivery truck.)

To solve the problem, all people need to do is find a parking spot, like the rest of us, without blocking traffic. But everyone can help. See a bike lane blocked? Call the police non-emergency line (206-625-5011), Michaud says, and they'll send a parking enforcement or patrol officer out. Or if you can't remember that number, call 911.

So far, so good—I guess? But there's one more thing: there's a way to prevent this problem in the first place. As I've noted before, cycletracks (protected bike lanes) are designed so that this kind of stuff doesn't occur. We sure could use some actual funding of the Bike Master Plan, which would create more protected cycletracks and lessen the dangers for everyone.

And yet... there is a blockage I keep noticing on the Broadway cycletrack. This thing:

What is it and why is it blocking a good chunk of the bike lane? It's a sand-filled functional art installation by SDOT called a "bollard," apparently, that's also meant to serve as a buffer between parked cars and cyclists. The problem is they're not heavy enough to stay put and they keep being bumped into the cycletrack itself. (They're also, IMHO, not very glamorous looking.)

In July, SDOT sent out a crew to fix one of the stray bollards after I tweeted about it. But why does it keep happening? Seems SDOT is taking its sweet time to find a solution. Sheridan, the department spokesperson, says the department plans to put a permanent fix in place by the end of the year.

Comments 77
Tags: News Blogs Bikes
The Stranger depends on your continuing support to provide articles like this one. In return, we pledge our ongoing commitment to truthful, progressive journalism and serving our community. So if you’re able, please consider a small recurring contribution. Thank you—you are appreciated!
CONTRIBUTE NOW