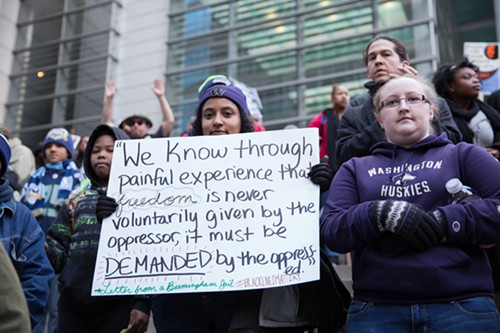 At the beginning of Martin Luther King Jr. Day, someone handed me a pin with King’s face on it, next to a quote: “Let us be those creative dissenters who will call our beloved nation to a higher destiny.”

First, in the morning, there was the Seattle Crimes—a fake front page folded over editions of the Seattle Times in newsstands across the city, which perfectly mimicked the style of the newspaper. The content was altogether different. "Black Lives, Blue Privilege," the top headline read.

If you've been wondering what local protesters want, exactly, read the whole piece. It includes a detailed deconstruction of Seattle's police accountability system, including the Office of Professional Accountability (OPA), the Community Police Commission (CPC), and the Seattle Police Officers Guild (SPOG). It concludes:

The local struggle against police brutality and abuse must include confronting clear obstacles such as SPOG and the institutional power it wields over the current OPA and any future efforts to create greater community control over SPD. We must call out the failures of OPA, push past the reforms proposed by CPC and the Mayor, and press for radically different ideas while doing so; otherwise, we’ll likely just end up with some small changes to an already flawed system.

"It was refreshing to see a front page about something that actually matters," said Highline College professor Shon Meckfessel, who picked up a copy of the paper from a newsstand on his way to the annual rally at Garfield High School. The real Seattle Times front page yesterday? All about the Seahawks.

The annual Martin Luther King Jr. Day rally was attended by an incredibly diverse crowd of thousands. The march, the largest I've seen in a few years, stretched several city blocks. Labor unions, from SEIU 775’s homecare workers to Ironworkers Local 86, were out in force. Few seem to know that when King was killed in Memphis, Tennessee, in 1968, he was on a mission to support striking sanitation workers, and that his focus had shifted toward fighting poverty—what he called one of the three "triple evils," along with racism and militarism.

Notably absent from the march was SPOG, despite recently joining the nominally left-wing King County Labor Council. The city is currently negotiating key aspects to the police reform system with SPOG.

Jonathan Cunningham, who works at the Experience Music Project, marched with his daughter. He'd scrawled a long list of names—"all killed by police," he told me as we rounded Westlake Park. "Tamir Rice: grand jury, no indictment. Oscar Grant: the guy went to jail for like six months. Aiyana Jones: no conviction. Sean Bell: all the officers who killed Sean Bell on the eve of his wedding—no conviction. Eric Garner: no indictment. Mike Brown: no indictment. Ezell Ford, good luck. Akai Gurley? Nothing so far. Amadou Diallo, shot nineteen times, no convictions."

"At the bottom," he explained, "it says, 'Will my child be next?' I used to worry about myself being on this sign. Now I'm much more worried about my own child."

Murray held a #BlackLivesMatter sign and posed with protest organizers Gui Chevalier and Jorge Torres, who police arrested and charged with pedestrian interference during a march on December 6.

At about 2:30 p.m., while the marchers were rallying at the federal courthouse, a group of eight people walked onto northbound Highway 99 above Mercer Street and sat down with arms linked in heavy lockboxes. They didn't want to speak to the press, but three supporters, who walked the line giving the protesters sips from bottled water, handed out a press release. 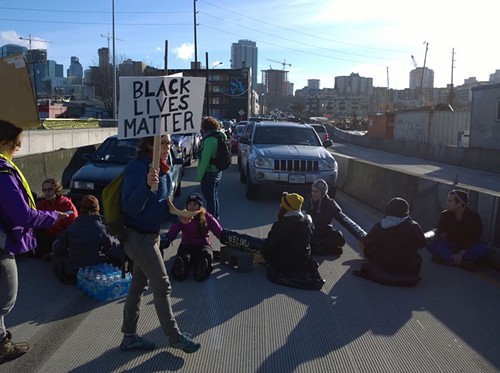 "We have decided to engage in civil disobedience," it said, "putting our bodies in the street for four hours and twenty-eight minutes. We do this to represent the 4.5 hours Mike Brown was left in the street after being killed by the police officer."

The group identified itself as "white people, primarily Jews and queers...responding to the call from Black leaders, locally and nationally, to show up in solidarity and disrupt business as usual." I recognized several as members of Jewish Voices for Peace. The group used the same lockbox tactic to block access to weapons manufacturer Boeing during the Israeli bombardment of Gaza last summer.

Alysse Hotz, an English instructor at the University of Washington, tells me she's proud of arrestee Cole Buckley, who was a student in one of her classes last year. The course studied rhetoric used by movements for racial justice during the 1960s and "discussed how mainstream discourses variously framed these organizations and coalitions as 'violent,' 'too extreme,' 'dangerous,' etc."

"His actions demonstrate that education doesn't begin or end in a classroom," Hotz wrote in an e-mail.

How did police respond? It took a Seattle police "cut team" about two hours to cut through all of the locks with a buzzsaw. They did so calmly and, as far as I could see, professionally. Nobody appeared to be injured in the process. The protesters were handcuffed and led off to a paddywagon.

Police sergeant David Fitzgerald asked me if he could read the press release the protesters handed out, while manning a makeshift barricade between them and their supporters on the edge of the road. He said he agreed with "a lot" of it. "That's not unreasonable." Then he was back to supervising the cut team.

Unless there are two David Fitzgeralds in SPD, he appears to be one of the Seattle police officers who unsuccessfully sued the city and federal government over objections to SPD's new use of force policy. Also on the scene? Randy Jokela.

Police say they arrested nineteen people yesterday, bringing the total count since police brutality protests kicked off in November to 41. They accuse one protester of assaulting an officer, necessitating a trip to the Harborview Medical Center. SPD spokesman Patrick Michaud couldn't tell me about the circumstances of the assault, except to say that the officer did not break his leg.

The majority of those arrested, he said, "were fairly peaceful." The Highway 99 blockade? "That was some good, healthy protesting."

There are reports that police used pepper spray when protesters attempted to block the Mercer exit on Interstate 5. Michaud said he's still getting information about yesterday's events and doesn't know whether pepper spray was used. (UPDATE: It was.)

But I ran into one young person who said he'd been sprayed in the face. He didn't want to be photographed or quoted, but he had what looked like spots of white pepper spray splattered on his jacket, much like I did during Occupy Seattle.

Jesse Hagopian, a teacher at Garfield High School and prominent author, also appears to have been sprayed. (On Thursday, he'll be speaking on this panel event with Olympic medalist John Carlos.) 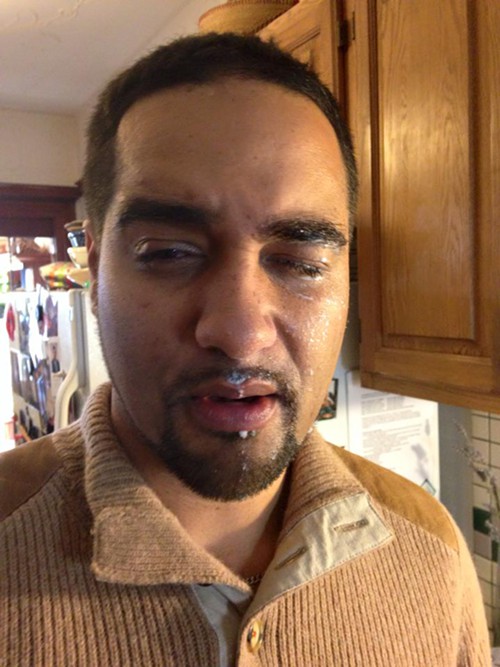 He posted the above photo on Facebook. "At one point after the big main march, group of bike cops set up a line to keep us from marching," he wrote. "Some people walked through the line, but I didn't. When my phone rang, I turned away from the cops and began walking away to answer the phone. A cop then ran up in my face and pepper sprayed me right in the face. The milk has helped a lot and I'm beginning to feel better."

"Wish we had a better world," he said.

Comments 3
Tags: News Blogs
The Stranger depends on your continuing support to provide articles like this one. In return, we pledge our ongoing commitment to truthful, progressive journalism and serving our community. So if you’re able, please consider a small recurring contribution. Thank you—you are appreciated!
CONTRIBUTE NOW