Was This Racist Post Written by the Cop Who Arrested an Elderly Man for "Walking in Seattle While Black"? 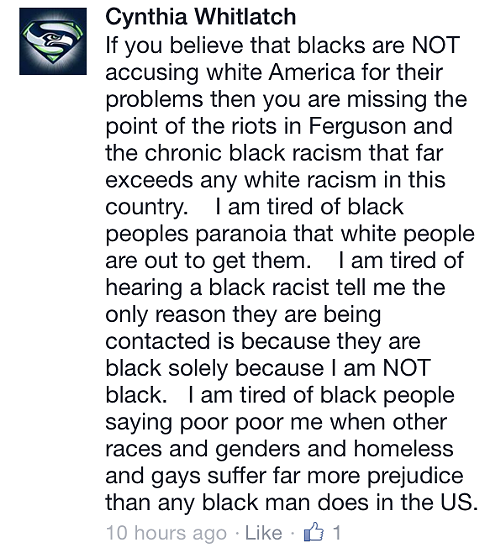 Today, after reading this story about Seattle police officer Cynthia Whitlatch's interaction with an elderly black man—in which she yelled at him to drop his golf club, which he was using as a cane, and then arrested him—Seattle resident Brian Davis sent me a message. Davis is black, and says he had an exchange with Whitlatch last August that concerned him so much he filed a complaint with Seattle's Office of Professional Accountability.

In August, Ferguson, Missouri was in the midst of a series of explosive protests over the police killing of unarmed black teenager Michael Brown. I wrote about inflammatory Facebook posts from SPD officer Christopher Hall during that time right here.

Davis, via e-mail, explained that he's friendly with another Seattle police officer named Dorian Oreiro. He sent me the above and following screenshots, which show his reaction to a post he says is from Oreiro's account, and his exchange in the comment section with someone posting under the name Cynthia Whitlatch.

Facebook user Cynthia Whitlatch accuses Davis of being a "black racist" and writes, "If you believe that blacks are NOT accusing white America for their problems then you are missing the point of the riots in Ferguson and the chronic black racism that far exceeds any white racism in this country. I am tired of black peoples paranoia that white people are out to get them. I am tired of hearing a black racist tell me the only reason they are being contacted is because they are black solely because I am NOT black."

"I'd never heard of her [Whitlatch] until I read her response to me on Facebook," Davis told me in an e-mail message. "When she started talking about Public Records requests, I put two and two together and guessed she was an Officer, as well... I went to her Facebook page and there were other clues but it was a Google search that confirmed my suspicions that she was SPD."

The screenshots from his phone are all he has, he said, because after he filed a complaint with the OPA he was de-friended by Oriero.

"I think what she wrote revealed a dangerous racial bias (especially coming from an Officer on a police force that is being monitored by the DOJ)," Davis explained. "And was problematic in almost too many ways to count... I just kept thinking she has already made up her mind about black people, especially black men, and carries that into every interaction she has with us." He added: "She clearly didn't know when she made the dig about gays suffering more prejudice than black men, that I am also gay myself. Never entered her mind that I could be both black and gay."

"I did file a complaint with OPA [Office of Professional Accountability] and was told that she had a talk with her Supervisor," Davis added. "That's it."

There was no OPA complaint filed regarding the incident on the street with Wingate last July, according to SPD. But the end result was the same: "Basically, she was talked to by her supervisor," said SPD spokesman Sean Whitcomb.

Also, on what appears to be Whitlatch's Facebook page, a user under the name Cynthia Whitlatch—who belongs to a group of what appear to be SPD members—"liked" an article from Guns.com about Arizona's notorious Joe Arpaio purchasing AR-15 rifles for his sheriff's department. The same user also shared a right-wing blog post titled, "The Trayvon Martin Picture the Mainstream Media Doesn't Want You To See" and added the caption, "He's huge..."

I've sent messages to Cynthia Whitlatch's apparent Facebook page, the OPA, and to SPD asking whether this is, indeed, SPD Officer Cynthia Whitlatch. I've also asked for a copy of the complaint Davis filed with the OPA. A SPD spokesperson told me they are looking up the OPA complaint. 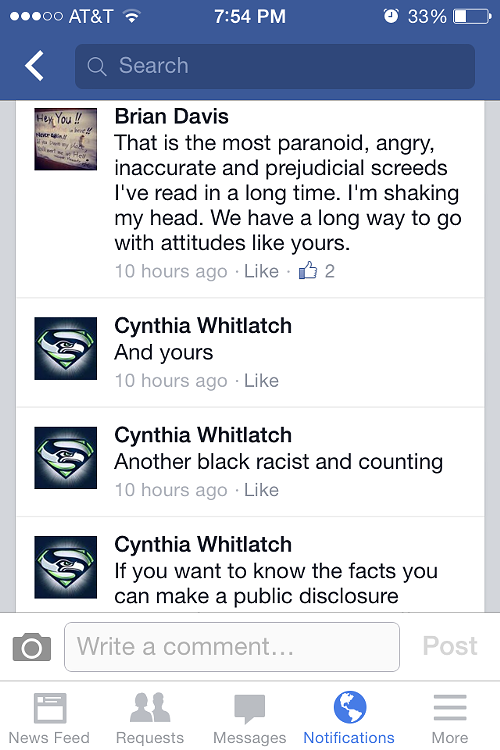 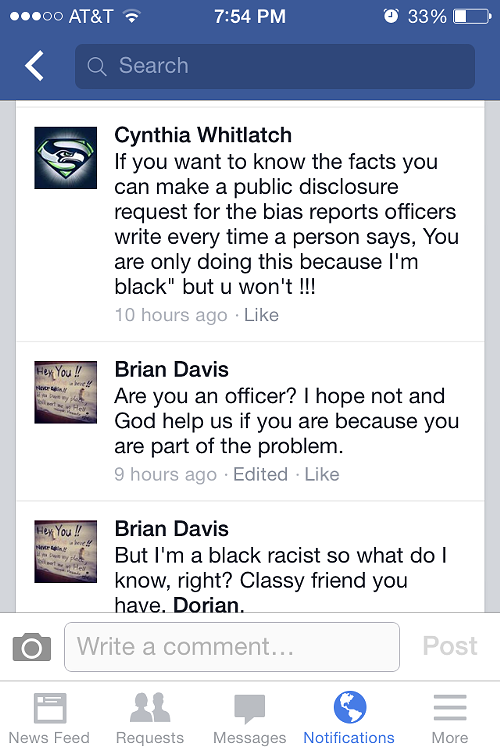 Comments 54
Tags: News Blogs Crime Race
The Stranger depends on your continuing support to provide articles like this one. In return, we pledge our ongoing commitment to truthful, progressive journalism and serving our community. So if you’re able, please consider a small recurring contribution. Thank you—you are appreciated!
CONTRIBUTE NOW