More than 100 people gathered at Cal Anderson Park and then marched through Capitol Hill on Saturday to call attention to racial profiling by police. The event was spurred by news Ansel Herz broke here on Slog last week that a Seattle police officer arrested William Wingate, a 70-year-old air force veteran and retired bus driver using a golf club as a cane, for no apparent reason last July. (The officer shouted at Wingate for swinging his golf club at her, but there is no video evidence to support that claim. Watch a dash-cam video showing the arrest here.)

Many in the group Saturday carried golf clubs, but Wingate—who walked at the front of the march—used a cane instead.

"All I have to say is this: I didn't do nothin'," Wingate told the crowd before the march. "I'm still confused. Really, I am. I'm very confused because here I am standing on the corner minding my own business, just like I'm standing right now, and a police officer comes from nowhere and accuses me of swinging the club. I've never seen this woman before in my life. I've had no altercation with this woman in my life, and here she comes saying that I swung, and I can't understand why... I have no beef with the police department, so I have no reason to swing the club."

Former Democratic Washington State representative Dawn Mason, who led an outcry that helped get the case against Wingate dismissed, said: "Not one system worked for Mr. Wingate. Once [SPD officer] Cynthia Whitlatch decided this man was guilty of looking at her and making her afraid for her safety and that of the residents of Seattle, everything fell into place behind her. Justice did not fall into place behind William Wingate."

Garfield High School teacher Jesse Hagopian, who is suing the city after he was pepper-sprayed on Martin Luther King Jr. Day, also spoke before the march. The videos of Wingate's arrest and Hagopian being pepper-sprayed "tell a very clear story about this city and I think about this nation," Hagopian said. "It tells a story that it doesn't matter if your pants are pulled up or your hoodie's off. If you have dark skin, you are a target in this city. It doesn't matter if you are an air force veteran, if you are a retired bus driver, if you are a teacher. In this city, if you have dark skin, you are a target by the Seattle police. We have a long, long way to go before justice is served in either of our cases."

Before circling back to the park, protesters stopped in front of the Seattle Police Department's East Precinct at 12th and Pine, where Whitlatch worked before being put on leave pending an investigation. On Saturday, the sidewalk in front of the precinct was fenced off, and about eight officers stood watch.* (At least one was wearing a body camera—the East Precinct is host to the city's new body camera pilot program.) 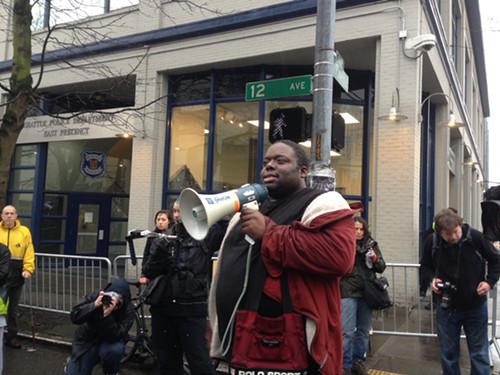 "What we need to remember is this will happen again," said Chad Goller-Sojourner, who organized the event and also spoke about SPD officers' statements on social media (see here and here), saying, "A racist cop off duty is racist on duty."

"The next time it happens again, we need to be here, following up," Goller-Sojourner said in front of the precinct. "My fear is that's going to happen to a 25-year-old black man and we'll be burying people. I'm tired of it. But we are here. We are watching. We see you."

Goller-Sojourner said he plans to continue organizing through the Facebook page for Saturday's event.

*The relatively small number of police provided a stark contrast to other overwhelmingly peaceful anti-police-brutality protests over the last few months, during which large numbers of officers responded, costing large amounts of money and sparking criticism. Throughout Saturday's event, I only saw a small handful of bike and motorcycle cops, who stopped traffic as protesters crossed intersections. 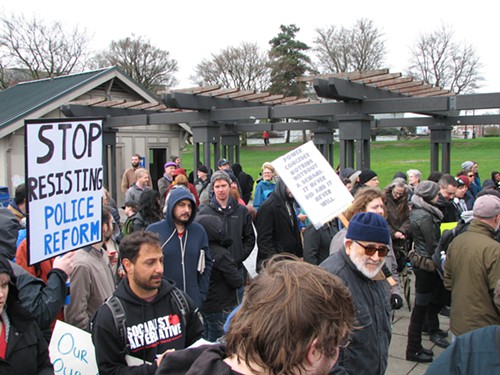 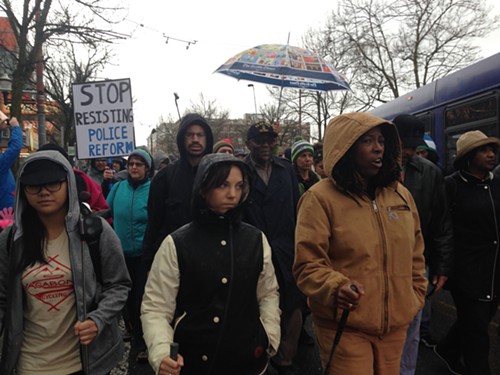 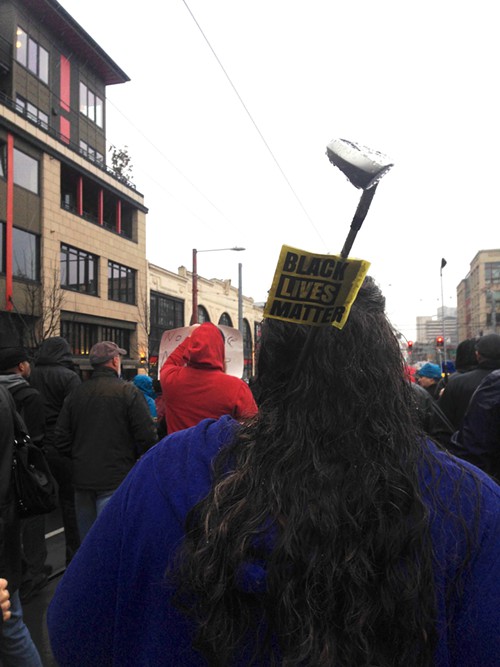 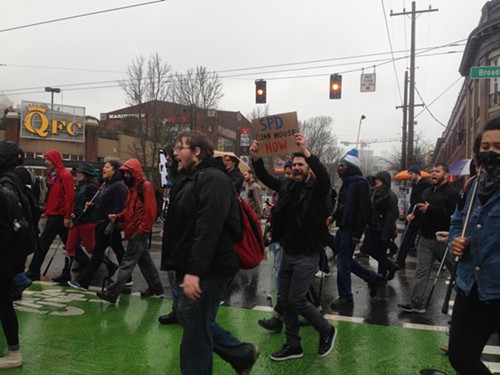 Comments 4
Tags: News Blogs
The Stranger depends on your continuing support to provide articles like this one. In return, we pledge our ongoing commitment to truthful, progressive journalism and serving our community. So if you’re able, please consider a small recurring contribution. Thank you—you are appreciated!
CONTRIBUTE NOW