Port commission meetings tend to be pretty boring. Lately they've been getting more interesting—especially when, earlier this month, large groups of protesters began showing up and dominating public comment sessions. But I still never expected to see this pop up on Twitter:

Seattle, together we can stand up to Shell, and say no to Arctic oil #packtheport #Shellno pic.twitter.com/JBJmCxvKZp
— Andreas Widlund (@WidlundAndreas) March 24, 2015

It was a man in the middle of the Pacific Ocean. Or, more accurately, a man somewhere near the waters of the Marshall Islands holding up a sign about events nearly 5,000 miles away. An extremely attractive man.

And there were at least five more exceptionally attractive humans where he came from: three women and three men in all. From the looks of it on Twitter, they all appeared to have nice cheekbones and enjoy stuff like ice climbing, woodworking, rugby, and snowboarding.

A call to Greenpeace clarified what I was seeing on Twitter. Two weeks ago, Greenpeace set sail from Thailand with a 35-person crew on a recycled Russian firefighting ship, the Esperanza, with the sole purpose of following Shell's Arctic oil drilling rigs across the ocean.

I wanted to be on the boat. Is there any way I could get on that boat? "No," said Greenpeace spokesperson Travis Nichols.

But he could facilitate a call with someone on the boat. Laura Kenyon, 31, a Canadian who had been working with Greenpeace's Arctic campaign for three years, told me that Greenpeace's individual country offices had chosen six crew members to star as the public face of an event they had labeled #thecrossing. The crossing means following oil drilling rigs for weeks on the open water, not knowing when you might see land, and not knowing if you might have to turn around.

Kenyon denied that aesthetics had been any factor in the decision-making process.

"We wanted to bring people with us who really feel strongly about standing up and speaking out against this continued dominance of fossil fuel interests over the rest of us," she said.

The crew of the Esperanza doesn't really know where they'll end up. The Blue Marlin's automatic identification system (AIS) update says the vessel's headed for Port Angeles. Will the Blue Marlin ultimately end up in Seattle? If so, when? Port commissioner Bill Bryant has said that Shell's first rig will arrive in early April, but we don't know which one.

Right now, the Greenpeace activists on the Esperanza are just trying to keep the Polar Pioneer and Noble Discoverer in sight. Here's what the Esperanza looks like: 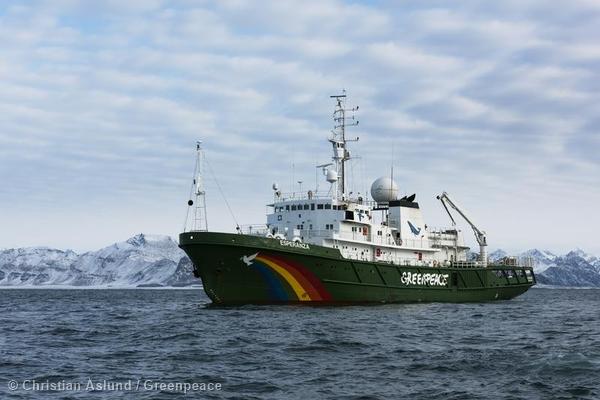 The Esperanza has a rainbow on it. And a dove. Christian Åslund/Greenpeace

There are musical instruments on board, some limited internet (no Netflix, though), and constant chores. The food, Kenyon says, is great, especially considering some of the dietary restrictions on the ship. One crew member is a vegan; another can't eat gluten or dairy.

On Tuesday, they ate hummus.

Now the crew is waiting on a decision from US secretary of the interior Sally Jewell—which could arrive at any moment—to affirm or deny the lease sale from 2008 that gave Shell rights to territory in the Chukchi Sea. If Jewell denies Shell the lease and Shell doesn't end up drilling this summer, "our journey would become a different kind of journey," Kenyon said. "It wouldn't be a negative."

As evidenced by Twitter, Kenyon and the rest of the crew are also avidly following Seattle's port commission meetings. On Tuesday, crew members tweeted photos of themselves in solidarity with Seattle's public speakers.

But Greenpeace's international participation also marks a new phase in what has until now been a grassroots effort to block Shell's rigs from coming into Seattle. One only has to look at recent history to imagine how creative—or dramatic—these protests could soon become.

In 1997, Greenpeace activists dangled off the Aurora Bridge in harnesses for "nearly two days," blocking fishing trawlers leaving Lake Union. In 2012, during Shell's last Arctic drilling attempt, Greenpeace collaborated with corporate hoax artists the Yes Men to host a fake Shell event at the Space Needle. The resulting video went viral, and received mixed reactions from journalists and commentators. (That same year, Shell also won an injunction against Greenpeace activists, preventing them from getting near their rigs.)

Seattleites, too, have already raised the specter of using kayaks to meet the rigs on the water during testimony at port commission meetings. Locals are no strangers to blocking trains in protest of oil shipments, or to coordinating a mass demonstration in the tens of thousands (see the 1999 WTO conference).

If port commissioners hoped people would forget about their decision to host Shell's Arctic drilling rigs in Seattle, good luck. They now have a 35-person, hummus-eating crew of Greenpeace activists in pursuit of those vessels. As one Raging Granny put it at Tuesday's port commission meeting, "It's going to be a hot summer." She had no idea.

Comments 27
Tags: News Blogs Enviro
The Stranger depends on your continuing support to provide articles like this one. In return, we pledge our ongoing commitment to truthful, progressive journalism and serving our community. So if you’re able, please consider a small recurring contribution. Thank you—you are appreciated!
CONTRIBUTE NOW