On March 24, Seattle suffered through another tragicomic evening of traffic gridlock when a semitruck full of frozen salmon overturned on Highway 99. Hashtag #TraffishJam, as blogger Tom Fucoloro called it. Alternatively: traffic #clusterfishfuck.

People were stuck and, having not moved for hours, abandoned their cars in the street, some opting for bicycle share. A Sounders goalkeeper reportedly took off sprinting on foot to make it in time for kickoff at CenturyLink Field. At least one local transit official was seen bailing from a bus and walking. The mess lasted for hours, as officials worked to clear the truck off the highway.

Now imagine a light rail network connecting Ballard, West Seattle, Everett, Bellevue, and Tacoma to the heart of Seattle. Imagine going underground and getting on a train to any of those places. Imagine how many fewer cars would have been on the streets downtown during the #TraffishJam.

If we had a fully built light rail network, we would be living in a faster, less congested, more connected city.

Seattle is the fastest-growing large city in the country, and our transportation system cannot cope with this surge in population. There will be many more (and much worse) dreadful traffic clusterfucks.

But right now, the fate of light rail is in Olympia's hands. Everything depends on what happens down at the state capital over the course of the next month. If you've been nursing a sense of burning rage about all the traffic, you need to fire that rage toward your elected leaders.

How do we get more light rail? By funding a plan known as Sound Transit 3. Sound Transit, the agency that operates the successful Link train that connects Seattle to Sea-Tac Airport, says it needs $15 billion to complete Sound Transit 3. It wants to put a taxation measure—likely to be some combination of property, motor vehicle excise, and sales taxes—on regional ballots in 2016 to raise up to $15 billion in order to make it a reality.

"There is tremendous public demand," said Sound Transit spokesperson Geoff Patrick, "for expanding the regional light rail system to reach destinations including Ballard, West Seattle, Everett, Tacoma, and Redmond. There is no way a package could do all of these things with anything less than full authority for $15 billion in new revenue."

But state legislators aren't necessarily going to let Sound Transit do that. On March 2, when the Republican-controlled state senate approved a statewide transportation package for the ballot, it approved only $11 billion in taxing authority for the Puget Sound region. That is, the state limited our ability to tax ourselves to just $11 billion—$4 billion short of what we need. (The state refuses to fund regional light rail from its own budget.)

Senate Republicans voted it down.

Mind-blowingly, even the Republican senators who represent areas that would benefit from regional light rail voted against it. Those senators are Joe Fain (Auburn and Kent), Mark Miloscia (Federal Way), and Andy Hill (Redmond). Fain is one of two lead negotiators on the Republican side on transit.

Don't Republicans hate big government and want local control over local affairs? Don't they want their own constituents to be able to vote for or against taxing themselves to fund light rail connecting them to Seattle and their neighbors around the region? If they decided to stand up for their own constituents (and the region), the senate could have the pro-light-rail bloc it needs.

I reached out to all three of these senators to ask why they voted against Frockt's amendment. None of them got back to me.

But Fain did write back to some concerned residents after I urged readers of Slog, The Stranger's blog, to pressure the senators. And this, at least, is promising: Fain said to several people who e-mailed him that he would keep an "open mind" on a higher level of taxing authority for Sound Transit 3 if it passes out of the state house. (If you haven't written to Fain, Miloscia, and Hill yet, do it right now: joe.fain@leg.wa.gov, mark.miloscia@leg.wa.gov, andy.hill@leg.wa.gov.)

Republicans also added a so-called "poison pill" to the bill that came out of the senate that says if Governor Jay Inslee implements cleaner fuel standards through executive order, a key plank of his climate change agenda, the package's investments in things like light rail, bike paths, and buses will get automatically diverted into road projects instead. (They also added a bunch of other terrible road projects and environmental rollbacks that I don't have the space to list here.)

Now it's up to the state house of representatives, said Transportation Choices policy director Andrew Austin, to set a "high-water mark" on transit, before the transportation package goes back to the senate, by doing two key things: Give Sound Transit the full $15 billion in taxing authority and strip out the "poison pill" on fuel standards. In other words: Don't be afraid to challenge the Republicans and make them, not progressives, be the ones who have to back down this time.

A group of local elected leaders traveled to Olympia on March 26 and gave the Democrats all the ammunition they should need, in testimony to the house transportation committee: "Give us $15 billion of authority," said Tacoma mayor Marilyn Strickland. "This is something that our region needs desperately. [Voters] have told us unequivocally that they need transit."

"If one accident happens," said Seattle mayor Ed Murray, "as it did with a truck full of salmon, the entire system clogs up... The only way we can function as a city and as a region is with the full $15 billion authority."

The mayors of Bellevue, Redmond, Edmonds, Kent, Kenmore, and Redmond, and officials from King and Snohomish Counties all spoke up in favor of a robust transportation package, some of them specifically calling for $15 billion in taxing authority.

Unless I missed it, nobody, in three solid hours of continuous testimony, argued that Sound Transit's authority should be limited to $11 billion instead of $15 billion.

Maybe that's because there is no credible argument for the limit.

If the house doesn't set that high-water mark, ready your pitchforks. What could be more undemocratic than our legislators ignoring the overwhelming consensus of an entire region and denying us the ability to tax ourselves for an essential civic good like light rail? One the state itself refuses to fund? That's a good question to ponder next time you're stuck sitting in traffic. 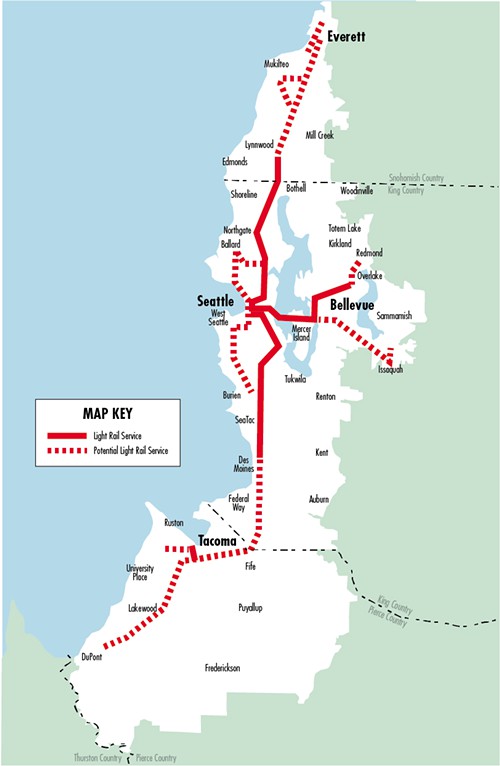