The Polar Pioneer, the Blue Marlin, kayaktivists, and the Olympic Mountains. Kelly O

It's sometime after 5 o'clock in the morning, and I'm on a rigid hull inflatable boat, bouncing through wild, freezing chop. The instructions are to not fall off, and my body improvises the rest, gripping a handle next to the steering column and licking snot and saltwater off my upper lip.

It's dark. The sun's not yet risen and Greenpeacer Jacqueline Zepeda, 27, is driving us—one reporter, two photographers, and a no-bullshit Greenpeace logistics coordinator— toward a 319-foot-tall Arctic drilling rig moving into the Port Angeles harbor from the Pacific Ocean and the Strait of Juan de Fuca. If Zepeda gets too close to the Polar Pioneer, the rig carried by the heavy-lift Blue Marlin vessel, she could be charged with a felony. Royal Dutch Shell won a temporary restraining order against Greenpeace earlier this week.

The Polar Pioneer, a semi-submersible Transocean drilling unit intended to probe for oil in the Chukchi Sea north of Alaska, cannot propel itself to shore. That's why it has to be carried by the Blue Marlin. From a distance, you can see the drilling platform lit up from within, floating into harbor like a giant, alien birthday cake.

The Polar Pioneer is Shell's replacement for the Kulluk, the drilling unit that infamously ran aground on an Alaskan island in 2012. Over the next couple of weeks, it'll be removed from the Blue Marlin, worked on, and eventually towed to Seattle. The US Coast Guard will inspect the vessels before they set out for the Arctic this summer (that is, if Shell's exploration plan is approved by the Bureau of Ocean Energy Management and they acquire all the necessary permits). And from there, the Polar Pioneer is supposed to help Shell explore six drilling sites in its Chukchi Sea lease areas, in a zone called the Burger Prospect. The goal is to find spots that can be developed for production later down the line.

A coalition of local Seattle activists intend to stop Shell, a $200 billion company, from ever leaving Elliott Bay. They're training a fleet of kayakers in order to do so, and 13 of them showed up at 6 a.m. for the first rig's arrival in Port Angeles. Greenpeace, the international NGO, also had three motorized boats—the Byak, Breezy, and Billy Greene—that circled the rig as daylight broke in the east over Mount Baker.

The Billy Greene zig-zagged in front of the rig so photographers could get just the right shot with a "People vs. Shell" flag in the foreground. Kayakers, meanwhile, had paddled into the harbor. A small group of protesters held signs on shore, and by 9 a.m. curious locals had started showing up, too.

And there were others. Two men in jeans and baseball caps stood a couple hundred feet away from the environmentalists with a walkie talkie. They said they were just there to watch, to observe. 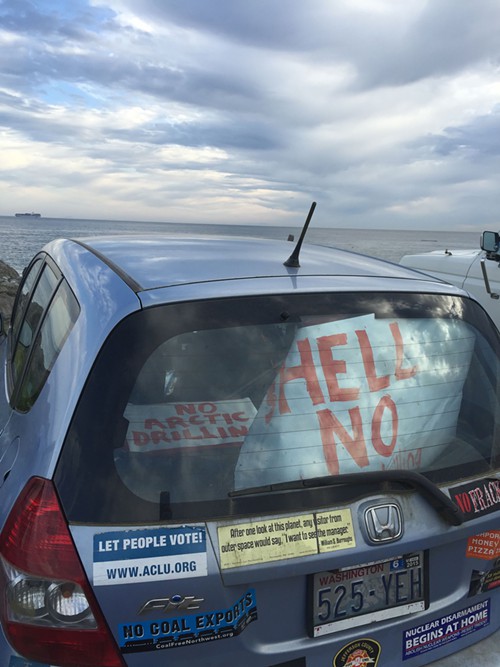 Parked in Port Angeles, at the end of a spit called Ediz Hook. Kelly O

James Salminen, 58, lives in a trailer park nearby. He heard about the rig on the radio, and drove to Ediz Hook, a long spit of land reaching into the strait, to check it out with his binoculars. "There needs to be more people standing up [against] things like this," he said.

But not everyone in town agrees. "They're against Greenpeace and environmentalists," Salminen said. "They think they're communists, and they're screwing up things, and they're idiots. Like one woman down here, she called her husband and said, 'Well, they ought to go out there and shoot 'em.'"

Blue-collar paradise. Those were the words of Vincent Ahles, 69, a birdhouse maker who lives on a hill in direct view of the Polar Pioneer. He used them to describe Port Angeles, the waterfront town nestled right along the snow-capped mountain range. But Washington saw record low snowpack this year. "Usually those mountains are white 50 percent of the way down," Ahles said.

Adam Sutej was on his way to the gym when he saw the rig in the harbor. He's a 32-year-old Army vet and served in Iraq, he said. That much taught him to follow oil and gas industry news closely. "It doesn't surprise me at all," he said. "These corporations want to deplete natural resources and exploit the environment for profit. It's ridiculous."

Sutej glanced at the rig. "Look at that big, ugly, fucking piece of shit.”

Comments 10
Tags: News Blogs Enviro
The Stranger depends on your continuing support to provide articles like this one. In return, we pledge our ongoing commitment to truthful, progressive journalism and serving our community. So if you’re able, please consider a small recurring contribution. Thank you—you are appreciated!
CONTRIBUTE NOW