May Day 2015: After a Day of Peaceful Marches, an Evening of Broken Glass, Flashbangs, and Injuries 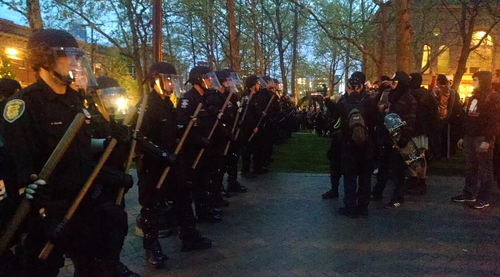 Police lining up on the plaza of Seattle Central Community College as the evening May Day protests heated up—there have been reports of window-smashing and injuries to both officers and demonstrators.Alex Garland

Editor's note: This post will be updated throughout the day, with most recent posts at the top. For breaking news on May Day 2015 as it's happening, follow us @strangerslog or keep checking back on this post for more updates.

The SPD now puts the number of arrests at 16, and is calling the arrested people "rioters":

Here's a look at one SPD tactic in response to the protests: 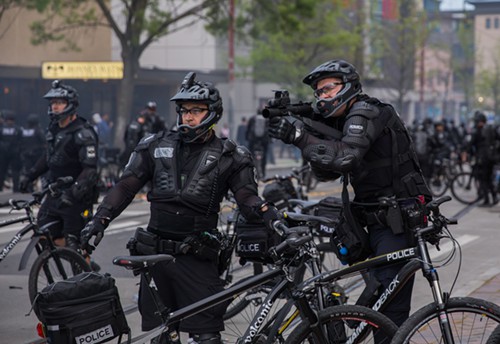 More description of that mysterious drone, from Brendan:

Looked like a four-propeller contraption: two red flashing lights on the underside, two green. It didn’t hold very steadily in the air, but seemed to zoom here and there, and several stories higher than the roof of the Blick art supply building. Which kind of makes me think it was a twitchy news drone, or some bored and wealthy private citizen, instead of the law or some protesters trying to “monitor” anything.

That red light in the middle of the sky is a drone hovering over the crowd. SPD gave its drones to LAPD a while ago. pic.twitter.com/pPKYH0ucpG
— Ansel (@Ansel) May 2, 2015

Brendan reports that it all seems to be winding down. "The only real conflict I hear now is a lovers' quarrel or two in the crowd."

The police are blocking traffic and eating meals en masse outside the East Precinct. pic.twitter.com/jJ1RpvbfL8
— Ansel (@Ansel) May 2, 2015

The Seattle chapter of the National Lawyers Guild has issued a statement condemning the SPD's behavior tonight:

Earlier this evening, Seattle Police Department officers singled out and harassed National Lawyers Guild legal observers during their crackdown on May Day protesters. After having been earlier struck by rubber bullets, two NLG legal observers were walking up Capitol Hill on the sidewalk. While police were lobbing flash grenades into the crowd, the legal observers heard an officer yell out an order to arrest them. Officers then grabbed one of the legal observers by the backpack and handcuffed her. After ten minutes, officers released her and told her to go home. The NLG has received reports that officers have also arrested at least one street medic, who has not been released.

When people are protesting against police violence, there is a heightened need for lawyers, legal workers and law students to be present and observe police behaviors. What separates a democracy from a police state is the ability of people to observe the police without fear of retaliation and physical violence. It is completely unacceptable to single out legal observers for arrest and such conduct constitutes a direct assault on core values of a free society.

The Seattle Chapter of the National Lawyers Guild therefore calls on the Seattle Police Department to cease its aggressive and unprovoked harassment of our legal observers.

The police surrounding the plaza at Seattle Central have given an order to "fall back," Brendan reports. The handful of demonstrators still there responded with taunts. Ansel reports that some shouted "Move back," mimicking the command bike cops often give to protesters.

Brendan reports the protesters are chanting, "We don't wanna hurt anybody, we don't wanna get hurt." Also, a guy is haranguing an officer about how he's "not a bigger person because you've got a stick." Meanwhile, Broadway is being reopened to traffic and the numbers of protesters appear to be thinning.

Just heard a sergeant say police are about to open up Broadway to traffic again. Crowd has dwindled to a few dozen.
— Ansel (@Ansel) May 2, 2015

Mayor Ed Murray, in a statement, declares that "those who are violent will be arrested."

Seattle celebrates free speech, the right to assemble and freedom of the press. People are raising their voices across the nation, working constructively to advance issues of racial equity and justice in our society. During this moment in history, peaceful protest and civil disobedience can be effective vehicles of social change. The City of Seattle prepared extensively to protect the rights of peaceful protesters to express their anger at racism and injustice.

What erupted tonight is a very different story. Tonight we saw assaults on police officers and senseless property damage, which cannot be tolerated. Those who are violent will be arrested. We will work to disperse groups that are threatening the safety of our residents and businesses.

The SPD sees the drone, too, and says it doesn't belong to the department:

Drone sighting above @SeattleCentral plaza. Not ours (we don't have one)! #MayDaySea
— Seattle Police Dept. (@SeattlePD) May 2, 2015 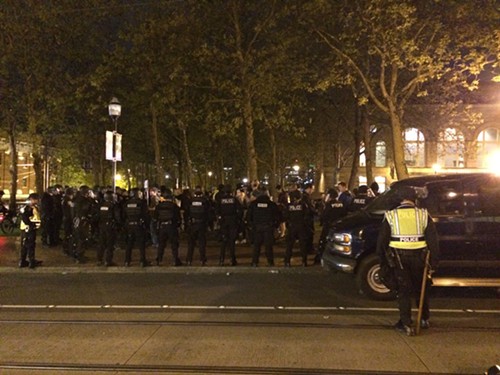 There's a strong SPD perimeter around the plaza at Seattle Central. Ansel estimates there are 100 people inside the perimeter. Police are letting people out, but no one can get back in. There is at least one visible drone overhead. Two members of the Puget Sound Medic Collective, named Jackson and Ash, say police seemed to become "way more aggressive, way faster" than in previous years. They say they saw police using rubber bullets for the first time this May Day, and they were "very generous with the flash bangs."

Two large groups of officers just approached the plaza and the Puget Sound Medic Collective medics thinks that police will either just tire the protesters out until they leave or conduct a mass arrest. Ash said, "I've never seen that in Seattle during May Day but I've certainly seen it in New York."

The Seattle Police Department reports 15 arrests this evening and three officers injured (two of them taken to Harborview with "serious" injuries).

This man says this welt is from an exploding flashbang. pic.twitter.com/gMD704XqOC
— Ansel (@Ansel) May 2, 2015

Ansel has called in a report questioning Captain Fowler's description of the evening (so far) as a "riot," though he says police are "throwing flash-bangs around like jellybeans." Just heard what sound like a few more from the office, coming from the Seattle Central Community College area.

If Seattle isn't enough for you, the Guardian has photos of similar scenes from Turkey, Indonesia, Paris, and Japan.

This guy looks like he should be going to Harborview.

This is Scott Lum. He says there were flashbangs all around but he doesn't know what hit him. pic.twitter.com/nYJWG6idC7
— Ansel (@Ansel) May 2, 2015

I just dodged a fragment of a flashbang, then a moment later, a shard of glass from a thrown bottle.
— Ansel (@Ansel) May 2, 2015

"This is no longer demonstration management, this has turned into a riot" -Captain Chris Fowler. #MayDaySea
— Seattle Police Dept. (@SeattlePD) May 2, 2015

An observer from the National Lawyers Guild—which commonly sends representatives to watch at demonstrations—says she's been injured by a police projectile.

A street medic is treating her. Her bright green hat marks her clearly as a legal observer. pic.twitter.com/qrc8RuFl4N
— Ansel (@Ansel) May 2, 2015

Extreme amount of police in riot gear. Elderly woman next to me stumbled upon this: "You call this a free country?" pic.twitter.com/HZ3xGe30rQ
— Sydney Brownstone (@sydbrownstone) May 2, 2015

Someone at the scene called to say that where demonstrators dragged dumpsters into the street, civilians are now putting them back.

The black bloc is heading towards downtown on Pike, leaving dumpsters strewn in the street in their wake. pic.twitter.com/q6nnLEuGsO
— Ansel (@Ansel) May 2, 2015

There are reports of flash-bangs (which can be heard at the office), pepper spray, and three arrests, as well as three officers injured, though that's not confirmed. (And sometimes fast reports of officers being injured by demonstrators turn out to be shaky—but still, we hope nobody's seriously injured.)

The police are guarding the worst corporate stores on Capitol Hill, not the local places. It's bizarre. (1/2) pic.twitter.com/ApKOezzyQj
— Ansel (@Ansel) May 2, 2015

Dissent among the dissenters—and between the First and Second Amendments.

The anticapitalists want the guy with the rifle out of the march. They say he's putting everyone else at risk. pic.twitter.com/0hJzvtFJTM
— Ansel (@Ansel) May 2, 2015

One individual in crowd on Boylston shattered a window. Officers now looking for suspect. #MayDaySea
— Seattle Police Dept. (@SeattlePD) May 2, 2015

May Day/Baltimore solidarity march in Argentina:

Demonstrators ask open carry advocate to leave the march because he is armed. #MayDay pic.twitter.com/01VXABSW33
— Alex Garland (@AGarlandPhoto) May 2, 2015

In a bit of 1921, Red Scare-era counter-programming, May 1 was federally recognized as "Loyalty Day." According to the US code, it is "a special day for the reaffirmation of loyalty to the United States and for the recognition of the heritage of American freedom."

This appears unrelated to May Day. But given what Mayor Murray said in his remarks this morning—"There will be cost overruns. We're standing up a good part of the police force for the next twenty four hours"—it seems like a unwise evening to be out making garden-variety mischief.

Did you know that May 1 is also the feast day of St. Joseph the Worker? (And did you know Jesus' dad's last name was "the Worker"?)

From the Seattle Police Department:

The immigrant rights march is now headed into downtown and toward the federal courthouse:

On Capitol Hill, the new Starbucks is apparently worried about window smashing:

Immigrant rights march is now on the move:

This sign stretches the width of the entire street. pic.twitter.com/cZPeaf6870
— Sydney Brownstone (@sydbrownstone) May 1, 2015

Here's the path the immigrant rights march will be traveling through the city:

The El Comite march for immigrant rights should be taking off from Judkins Park around 3 p.m.:

Mayor Murray just took the stage but he's getting booed and heckled by the crowd. pic.twitter.com/1vgI1zQHU3
— Sydney Brownstone (@sydbrownstone) May 1, 2015

The #BlackLivesMatter marchers have arrived at Judkins Park, where the El Comite march for immigrant rights is gathering:

We're at Judkins Park, where the immigrants rights march will happen in an hourish. pic.twitter.com/Xyxwl4Wy6Q
— Heidi Groover (@heidigroover) May 1, 2015

Earlier today, Mayor Ed Murray made a statement about May Day in Cal Anderson Park on Capitol Hill:

That discussion can't simply be limited to the issue of police. When we talk about race, we also need to talk about other systems that we need to reform—a failed education system, particularly for young African-Americans, a failed foster care system, a failed criminal justice system, a failed mental health system. We need to have a fuller discussion in this city and in this nation.

While there's much that we need to do… we realize that we've also made progress... We are better today than we were 50 years ago.

I would ask people today throughout the city to recommit to our long term journey for equity.

The #BlackLivesMatter protest is on the move: 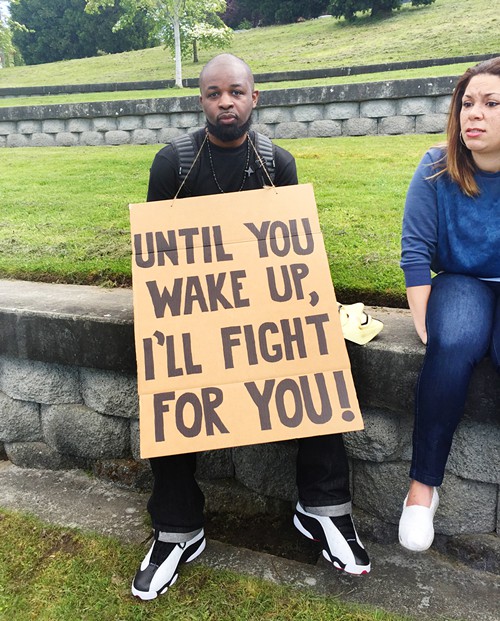 At MLK Memorial Park this morning, for the #BlackLivesMatter march. Kelly O

Aunt of Oscar Perez Giron is here and says "we're all going to do this together peacefully." http://t.co/VGg1Wb0vVw
— Heidi Groover (@heidigroover) May 1, 2015

There are people making breakfast burritos and the cops are like, "that looks good." This is chill AF. pic.twitter.com/iAY6koNxYh
— Heidi Groover (@heidigroover) May 1, 2015

There are maybe 30 people here, mostly reporters, plus a bunch of bike cops. pic.twitter.com/pIK1b6HMPw
— Heidi Groover (@heidigroover) May 1, 2015

Comments 102
Tags: News Blogs Politics
The Stranger depends on your continuing support to provide articles like this one. In return, we pledge our ongoing commitment to truthful, progressive journalism and serving our community. So if you’re able, please consider a small recurring contribution. Thank you—you are appreciated!
CONTRIBUTE NOW