The Carlton Complex wildfire in 2014 was the biggest wildfire in Washington's history. Tom Reichner/Shutterstock

In April, Mother Jones' Tom Philpott wrote about why Washington state is screwed (the answer being, "Drought, dammit"). But a new map shows why Washington may be double-screwed: wildfire season.

The National Interagency Fire Center, which combines the powers of nine federal agencies to fight wildfires, put out a report last week anticipating wildfire conditions from May through July. May looks normal (significant, yet normal), but June through August "will be increasing to above normal potential" everywhere but the northwestern section of the state.

Here's the prognosis for June:

Pinstripes are not a great look for Washington.

July and August look even worse:

For comparison, here's the July and August outlook at this time last year: 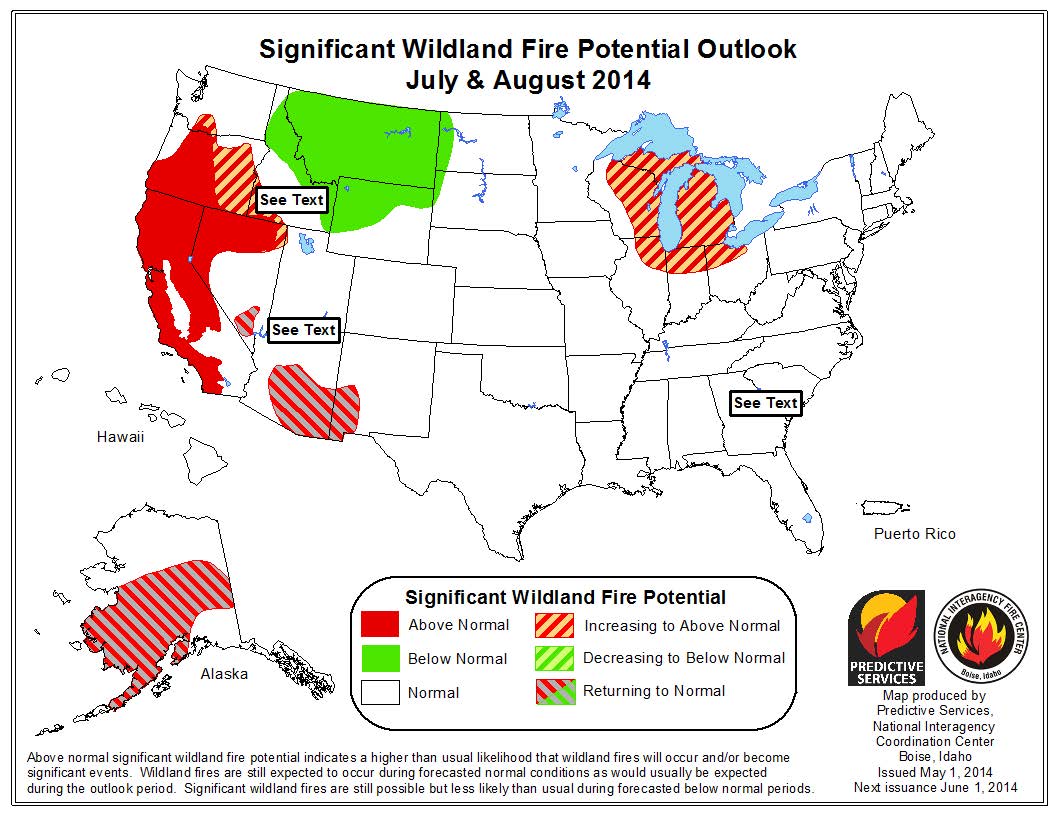 Washington's 2014 wildfire season turned out to be one of the most devastating on record. NIFC

Area weather treasure Cliff Mass pointed out that higher temperatures and lower precipitation rates will play some of the biggest roles in determining the outcomes of wildfire season. And lightning.

"If we don't get much of that the fire season will be modest even with heat and drought," Mass wrote in an e-mail. "So that is the real issue for this summer... what will the lightning do?"

Scientists are also calling the temperature and precipitation conditions in Washington state this year something of a preview for future years of climate change. "We know that warmer temperatures and lower precipitation, which are both of the things projected for this summer, are correlated to area burns in the Northwest," Amy Snover, director of the University of Washington's Climate Impacts Group, said. "I think that this year is really giving us a window into the future. Or you could call it a dress rehearsal for climate change."

(Speaking of lightning, though, Mass has noted that there's likely to be an increase in lightning east of the Cascades in the future. And that also will probably have something to do with climate change.)

Governor Jay Inslee has asked Congress to cough up more funds for the starved federal wildfire prevention and fighting budget after last summer's wildfire season cost the state more than $100 million. The University of Washington's Climate Impacts Group has estimated that the number of acres in the Pacific Northwest that burn a year will increase 60 percent in the 2020s and more than double in the 2040s. Some areas, like the Okanogan Highlands, Blue Mountains, and the Eastern and Western Cascades, will see quadruple acres burned in the 2040s.

Comments 9
Tags: News Blogs Enviro
The Stranger depends on your continuing support to provide articles like this one. In return, we pledge our ongoing commitment to truthful, progressive journalism and serving our community. So if you’re able, please consider a small recurring contribution. Thank you—you are appreciated!
CONTRIBUTE NOW