Yes, We Protest Shell Oil with Products Made from Oil. Duh. Now Join Us. 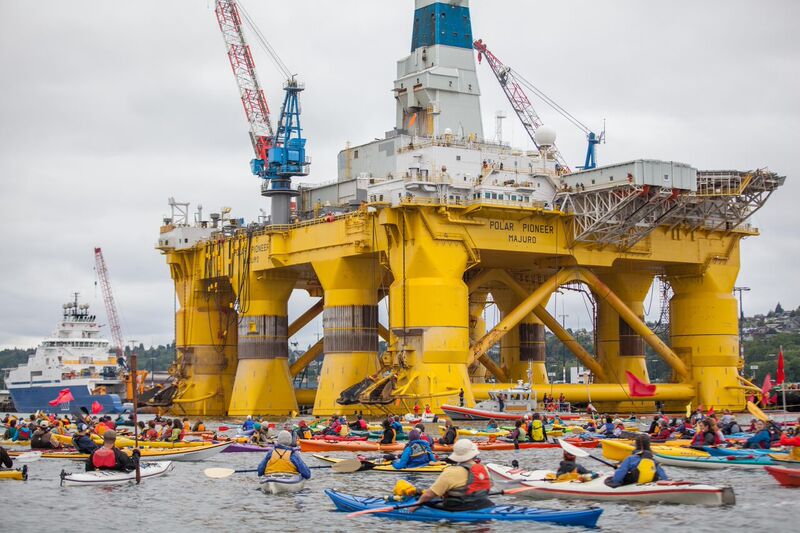 Hey, kids. Let's dispense with this pernicious meme, which we've all been seeing across the social medias, real quick. It goes like this: BUT THEY'RE PROTESTING OIL DRILLING USING KAYAKS MADE FROM PLASTICS HURR DURR. Someone even made a meme-image and tweeted it at me.

(a) As Harvard historian Naomi Oreskes told The Nation when asked about the "but we all use fossil fuels" argument: "Of course we do, and people in the North wore clothes made of cotton picked by slaves. But that did not make them hypocrites when they joined the abolition movement. It just meant that they were also part of the slave economy, and they knew it. That is why they acted to change the system, not just their clothes."

(b) As 350.org Chair K.C. Golden tells me, speaking by phone from today's rally at the Port of Seattle: "We all get that we're part of the fossil-fuel economy. No one's trying to be sanctimonious about it. We're not going to make the transition overnight. We don't need to blame ourselves for living our lives. We don't need to forsake all fossil-fuel usage tomorrow. We need to put one foot in front of the other toward a clean energy future. This is an echo of the fossil-fuel industry's attempts to get everyone to blame themselves... That's exactly the fossil-fuel industry's game—to make us internalize that weak point of view... I mean, I drove [to this weekend's flotilla protests] in a '76 Chevy pickup. It's not about blaming or shaming or telling people they can't live their lives. It's about telling Shell they can't lock us into this catastrophe anymore."

(c) Some kayaktivist named Ansel Herz says, "If someone—or, say, the planet—is getting beaten up with a baseball bat, is it immoral to use a baseball bat to fight back? Inanimate objects that come from our inescapable oil-based economy are inanimate. They can be used for good or bad. We're using them for good, to move the economy away from oil and stop climate change. Fucking herp derp, people."

Comments 123
Tags: News Blogs Enviro
The Stranger depends on your continuing support to provide articles like this one. In return, we pledge our ongoing commitment to truthful, progressive journalism and serving our community. So if you’re able, please consider a small recurring contribution. Thank you—you are appreciated!
CONTRIBUTE NOW