The station is $150 million under budget and 6 to 9 months ahead of schedule. Next year, you'll be able to stroll into this station, hop on trains that arrive every six minutes, and get to UW or downtown in four minutes. Ansel Herz

Lest the Bertha boondoggle hog all the limelight, let's not forget that Capitol Hill has its own tunnel project. The only difference is that everything about it is wonderful. Instead of tunneling to build a massive highway, the project is to build a subway line connecting the heart of Capitol Hill to downtown Seattle and the University of Washington. It is under budget and ahead of schedule. It is definitely not sinking the Earth around it. It will be adorned with eye-popping artwork made by local artists.

During a tour led by Sound Transit this morning, we got our first look inside the Capitol Hill light rail station, which sits between Broadway and the north west corner Cal Anderson Park—opening to the public between January and March of 2016. It's lookin' good. (It's been looking okay from the outside, too, as you'll know if you've been following Frizzelle's Boring Reports for the past few years.) 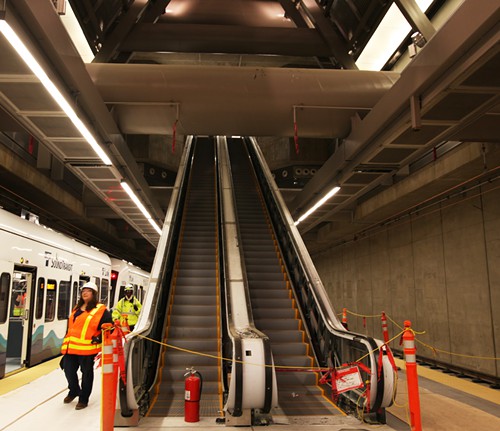 Up to 35,000 people a day are expected to board the train at Capitol Hill, according to a mayoral transit advisor—5,000 more than the 30,000 boarding the Sea-Tac link train these days. Kelly O

"If you have triggers around escalators," says Frizzelle, "maybe stay out of the Capitol Hill light rail station until they're done."

The $1.9 billion project is $150 million under budget, according to Sound Transit, and at least six months ahead of schedule—unlike a certain other tunnel project in Seattle. Ansel Herz 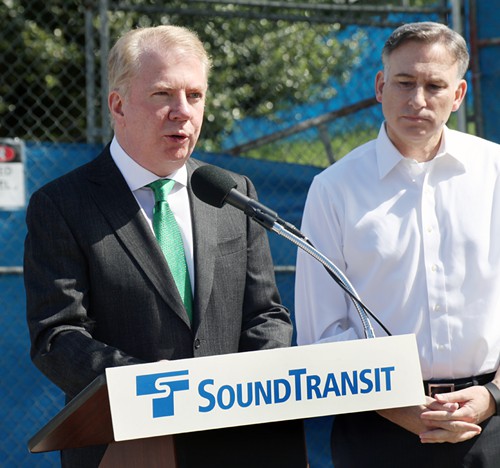 This project was funded by the sales tax, MVET tax, and federal grants. Before the tour began, Mayor Ed Murray and Dow Constantine called on the Washington legislature to give the Puget Sound region $15 billion in taxing authority—permission to tax itself—to build more light rail stations like this one throughout Sound corridor. E-mail these three Republican pasty stooges in the Senate about it if you haven't already. Kelly O 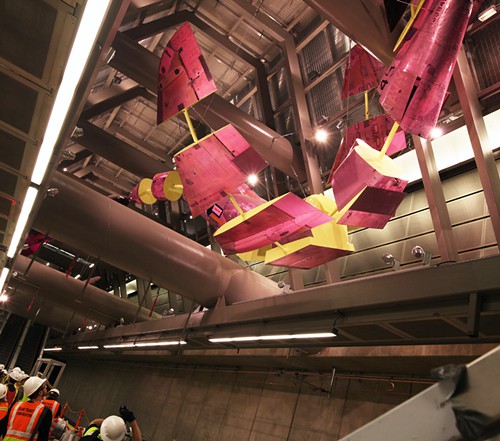 The art overhead when you're standing on the platform is two fighter jets broken into pieces, painted pink, and kissing, by artist Mike Ross. By the way, the platform is in the center of the station, New York City-style, instead of two skinny platforms along each side, like the downtown Seattle transit tunnel. Kelly O 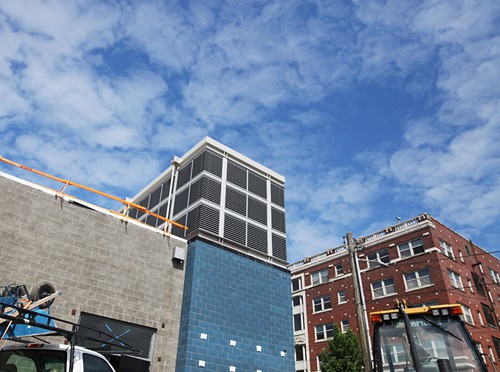 Here's what the station looks like from the outside. Kelly O 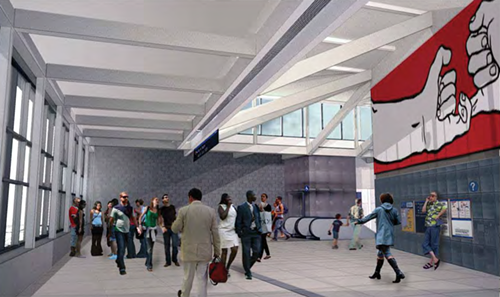 A mockup of the finished northern entrance to the station, which opens out on to the corner of Broadway and E John Street.Sound Transit

The station will feature gigantic enamel fabrications of artwork by Stranger Genius Award-winner Ellen Forney. Kelly O
Comments 48
Tags: News Blogs Two-Block Radius Transportation
The Stranger depends on your continuing support to provide articles like this one. In return, we pledge our ongoing commitment to truthful, progressive journalism and serving our community. So if you’re able, please consider a small recurring contribution. Thank you—you are appreciated!
CONTRIBUTE NOW