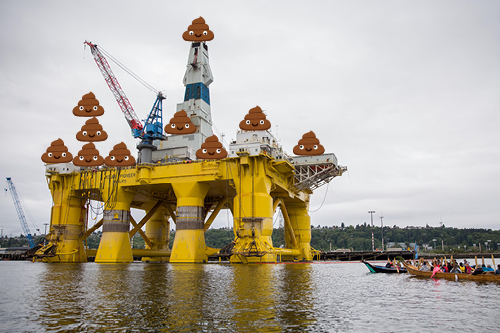 The Polar Pioneer's shit has run into a snag with King County sewers.

A waste management company contracted by Shell applied for a permit to dump the Arctic drilling rig's human excrement directly into a King County manhole. Today we learn that King County said "no."

First off, Shell didn't apply for the permit directly, and permits from third parties who aren't the ones generating the waste are usually denied. Secondly, the contractor didn't provide any data about the shit to King County's industrial waste program. You're supposed to test the shit, then send data about the shit to the regional officials. And that didn't happen.

"One of the problems that we have with hauled waste is that if the waste sits around for a long time, it becomes anaerobic," Pam Elardo, director of King County's wastewater treatment division, said. That's why waste generators need to test it and send results to the county. Once waste goes anaerobic, it can create hydrogen sulfide, and once that enters a pipeline, it can turn into sulfuric acid. Sulfuric acid can corrode the pipes, so it's best to know what you're dumping down there in the first place.

This isn't exactly a huge setback for Shell. Now that the permit's been denied, the oil company can keep on sending its drill-rig-related human waste to a facility that has a permit to process it, or apply directly for another permit to dump the waste directly into a King County sewer.

But we can assume these two options add another layer of inconvenience for Shell.

So is this what "Wreck of the Kulluk" author McKenzie Funk meant by "death by a thousand cuts"? (Or, to use an irresistible paraphrasing: Death by a thousand poops?) Funk suggested last week on The Stranger's podcast that protests and small bureaucratic obstacles to Shell's Arctic drilling plans aren't meaningless—that, taken together, small discomforts could create a bigger deterrent to pursuing risky business up in the Arctic.

King County's wastewater treatment director doesn't see this as a protest against turning Seattle into the launchpad for Arctic drilling. "From my perspective, we have to apply the rules same for everybody, and this case clearly did not meet our needs," Elardo said.

"Everyone has to follow the rules, even multinational corporations,” Constantine said in a statement. "Over the long term, we need to invigorate the promise of a clean-energy future and make King County the regional catalyst for carbon reduction, renewable energy, and a new innovation economy."

The shit has been flung.

Comments 23
Tags: News Blogs Oil
The Stranger depends on your continuing support to provide articles like this one. In return, we pledge our ongoing commitment to truthful, progressive journalism and serving our community. So if you’re able, please consider a small recurring contribution. Thank you—you are appreciated!
CONTRIBUTE NOW