The Morning News: Seattle Teachers Still Don't Have a Contract, But Seattle Kids Sent Their Cat to Space

Seattle teachers, instructional aides, clerical workers, nurses, and other school workers have voted to strike on the first day of school if a tentative agreement with Seattle Public Schools isn't reached. SB

Seattle Teachers Union and School District Still Haven't Reached a Deal After Strike Vote: But over the weekend the school district did agree to a guaranteed 30 minutes of recess. KIRO reports that Seattle Public Schools superintendent Larry Nyland now wants to sue the union—the Seattle Education Association (SEA)—in order to avert a strike on the first day of school, September 9. "Seattle school superintendent Larry Nyland wants to take the Seattle teachers’ union (SEA) to court to stop a potential strike, calling a teachers’ strike 'unlawful,' according to a district memo, released late Monday night," KIRO reports. "While contract negotiations between the SEA and the school district continued late into Monday night, Nyland called for an emergency school board meeting Tuesday night, asking the board to vote to authorize Nyland to take 'necessary actions' to end a potential strike." 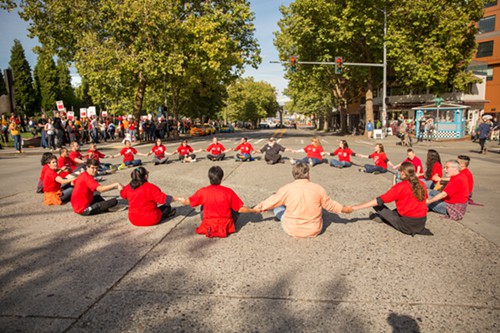 Space Needle workers picketed in front of the landmark on Labor Day, asking Space Needle LLC for a contract that will protect their jobs from outsourcing. Alex Garland

Space Needle Workers Picketed on Labor Day, Asking Space Needle LLC to Protect Their Jobs: Unionized workers demonstrated in front of the Space Needle to ask for a contract that would prevent their employer from cutting long-time workers and hiring subcontractors. Both City Council member Kshama Sawant and City Council candidate Jon Grant attended the rally.

Amazon Is Launching a Restaurant-Delivery Service Today: Prime Now users can now order instant lunch. "Two-hour delivery via Prime Now is free to Amazon Prime customers, who pay $99 a year for an annual membership, and one-hour delivery costs $7.99," Geekwire reports. "In this case, there is no charge for meals to show up at your doorstep within 60 minutes." Apparently tipping the driver of your food is "optional," and Amazon charges participating restaurants an "undisclosed percent of each order."

Five people were transported to Harborview Medical Center after a fire at a Capitol Hill apartment building on Monday. SB

Five People Were Injured in Monday's Boylston Hotel Fire: Firefighters responded to the burning apartment building shortly after 5:40 p.m. No word yet on the cause of the blaze, but the Capitol Hill Seattle Blog reports that five people were being treated at Harborview for fire-related injuries, including "at least one person (...) injured jumping from the burning building."

South Seattle Private School Wants to Tear Down Low-Income Apartments and Build a Parking Lot: People living in the apartment building now owned by the Hamlin Robinson School pay less than $600 a month in rent, but the building's new owners have other plans for the space. Soon-to-be-former tenants will receive $3,200 in relocation money, KIRO reports, but at least two of the building's residents say they're not able to find housing in Seattle with similar rents. Tuition for the Hamlin Robinson School costs $19,875 (Lower School) or $21,695 (Middle School) for the 2015-2016 school year. Just over a quarter of Hamlin Robinson students receive financial aid, which ranges between $3,000 and $10,000.

ICYMI, Charter Schools Are Unconstitutional, State Supreme Court Finds: Washington voters approved charter schools in 2012, but the State Supreme Court ruled on Friday afternoon that the privately-run schools can't receive public funding. KUOW reports that eight new charter schools are opening in the state this year, but the governor's office hasn't yet given an answer as to whether they'll be able to operate.

Seattle Sisters Launch Balloon to Nearspace With a Picture of Their Cat and a Lego R2-D2: Who runs the world? Kimberly and Rebecca Yeung, who launched a balloon loaded with a GoPro to a height of 78,000 feet, then collected the remains of the spacecraft from a central Washington cow field after it fell back to Earth. Geekwire has the full story.

Secretary of the Interior Sally Jewell Visited the Okanogan Complex and North Star Fires in North Central Washington: Jewell met with leaders from the Colville Indian Reservation, where families and tribal businesses have experienced heavy losses from this year's record-breaking fires. "We’re not sensible in the federal government on how we budget for fires," Jewell said. "FEMA has its hands tied with what it uses money for."

Locals Want to Help Syrian Refugees: A group organized by Syrian-American Hussein Ali met at the University of Washington on Saturday to discuss how to help Syrians caught in the biggest refugee crisis in decades. Follow the Washington Rescue Committee for Syrian Refugees Facebook page for more updates.

Comments 5
Tags: News Blogs
The Stranger depends on your continuing support to provide articles like this one. In return, we pledge our ongoing commitment to truthful, progressive journalism and serving our community. So if you’re able, please consider a small recurring contribution. Thank you—you are appreciated!
CONTRIBUTE NOW