Tell me why you're out here today.

The major point for teachers here is the extension of the day without adequate compensation. I think everybody at my building at Maple would be more than willing to work a longer day or for kids to be here longer. But the way the district is putting it is, "The kids are going to be here longer, but you don't have to be here longer," which is a totally presumptuous idea that teachers aren't going to have to work longer whenever the kids are here longer. We have a lot of planning and prep that we do and none of us just stay here for the just the contractual time that we're told to be here. A lot of us already stay here for longer hours because we care about these students.

How much time do you spend at school typically?

Typically, I spend at least 9 to 10 hours a day at school and then I go home and grade papers. So we actually put in a lot of extra time that is not in the contract language. There are some teachers that work for just that specific contracted time, but most teachers care a lot more and go way beyond. I know at my building that is definitely the case. I see all these people here for way longer than they are paid to be here. And it's because they care about the students that we work for. 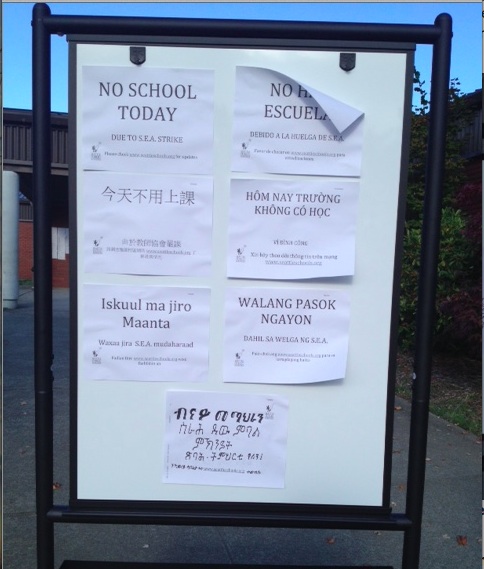 Can you tell me more about the students here? I noticed the sign saying "No School Today" that was posted outside and translated into other languages.

It's a very diverse school here at Maple. It's mostly an Asian population, but we have lots of Latino students, East African, African-American. I think there are 30 different languages spoken at this school. And we have a lot of ELL, English-language learners. I think we have the second highest population of ELLs in Seattle Public Schools.

We have a lot of paraprofessionals—the instructional assistants—who are bilingual and they are also on strike. They are just amazing with the community and they are getting disrespected too. They're being asked to stay longer—same deal. And a lot of the time, they are the people bringing students to busses, and the district isn't even thinking about how their contractual time won't actually fit with them being able to help students get onto busses and things like that.

And they [instructional assistants] are also wanting things like higher-step pay, because they reach a certain step and don't make more. Some of them have been here 20-something years and are getting the same pay as people that have been here only seven years. That's another thing that paraprofessionals and us are fighting for.

How do you see the underfunding of Seattle public schools affecting Maple Elementary?

I realize the Seattle district is getting squeezed because they're not getting enough money from the state, but the state did just release $40 million to them this year that should be going towards a lot of the things we're talking about: Adding more teacher pay, adding more teachers, reducing case loads for specialists.

Some specialists like speech therapists have no case load cap at all, so they [Seattle Public Schools] can just dump as many kids on their a case loads as possible. So the kids who are most vulnerable are the ones getting less services because the district is not adhering to giving case load limits to the ones providing for those students.

Kids with disabilities are the ones that need the most help. And they're just piling and piling cases onto not enough special ed teachers, physical therapists, occupational therapists, speech therapists. By not having enough staff, the district is just saying, "Well, we'll just give those kids less services."

Where do you live?

I live here on Beacon Hill.

Can you afford to live here on what you are being paid?

I can right now, but a lot of teachers aren't able to afford housing in their school areas nowadays in Seattle. And I know in my neighborhood the housing prices have definitely gone up, so I hope I'll be able to stay.

How long are you willing to stay out here?

Until we get a fair contract.

Striking workers at Maple Elementary on Beacon Hill chant: "I don't know what you've been told, but specialists have overloads." AG
Comments 9
Tags: News Blogs Education
The Stranger depends on your continuing support to provide articles like this one. In return, we pledge our ongoing commitment to truthful, progressive journalism and serving our community. So if you’re able, please consider a small recurring contribution. Thank you—you are appreciated!
CONTRIBUTE NOW