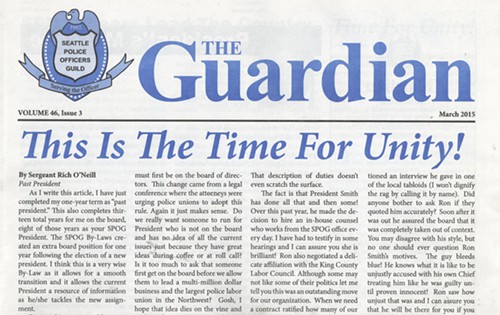 In the March issue of The Guardian, former SPOG president Rich O'Neill wrote that SPOG president Ron Smith's comments about the need for a culture change within SPD to The Stranger were "completely taken out of context."

For all of the high-minded talk of federally mandated reforms at the Seattle Police Department, one thing has remained constant: the stream of ignorant, bellicose, right-wing rhetoric coming from The Guardian, the Seattle Police Officers Guild's newspaper.

It's true that in February, SPOG President Ron Smith told The Stranger some very nice and firm-sounding things about how police officers in Seattle should adapt to the political climate of the city or go somewhere else. But a review of the union newspaper's monthly editions over the past six months shows that as far back as March, Smith backpedaled internally on his remarks. His allies within the union's leadership claimed he'd been misquoted. (Although no one from SPOG has raised any objections to the article with me or my editors.)

It appears Smith attempted to reap the positive publicity from the interview (in April, he was the subject of this complimentary profile in the Seattle Times), while behind the scenes, he disavowed his own words. Meanwhile, The Guardian consistently criticized Department of Justice reforms and the city's civilian oversight bodies, and in its August issue, published racist nonsense written by an officer. Among the lowlights:

In his column, McDonald also raises the alarm about Stalinism: "The culture in this country is slowly changing and it reminds me of the transition of Tsarist Russia to the Soviet Union (Stalinism as a way of Life)... Certain people want to get rid of the flag of Dixie Land. You can already be sued for practicing a religion if it's based on Christianity."

He concludes, "I would write, Live long and Prosper but that would be from Mr. Spock and I could get into trouble with the socialist elites."

There are also these cartoons:

All of this is par for the course. As Dominic Holden reported in 2014, SPOG has used its newspaper in recent years to label the city's Race and Social Justice Initiative "an assault on traditional and constitutional American values," liken efforts to combat racial profiling to "socialist policies," and argue that cops should be allowed to call citizens "bitch" and "n***a."

This spring, King County Sheriff John Urquhart said the "whip" needs to be "cracked" at SPD in order to get rid of the department's "good ol’ boys network." (When it comes to gender parity, I counted one article written by a female police officer in The Guardian’s last six months of issues. Out of 11 directors on SPOG’s board, only one is a woman.)

But for some reason that no one has been able to explain to me, officials overseeing reforms at SPD are afraid to openly criticize the union for fulminating against reforms and publishing racist commentary. The union is currently renegotiating its 80-page contract with the city behind closed doors.

Mayor Ed Murray, who was endorsed by SPOG, Ron Smith, and the local division of the Department of Justice, did not respond to a request for comment. Nor did Council President Tim Burgess.

SPD confirmed that McDonald is an active member of the force (although he was recently diagnosed with ALS, or Lou Gehrig's Disease) and sent me this statement after I e-mailed police chief Kathleen O'Toole about the newspapers: "The Seattle Police Department is moving full speed ahead in implementation of the Consent Decree, as evidenced by recent data. The vast majority of SPD officers are entirely committed to modernization and reform. Individual commentary should not be seen as a barometer for the progress we have made, which has been substantial."

Supposing—supposing—this is true, this also remains true: The department is effectively throwing up its hands and doing nothing about a vocal minority of police officers who are not committed to reform and who find a voice in the union's elected leadership and its newspaper.

Comments 12
Tags: News Blogs Crime
The Stranger depends on your continuing support to provide articles like this one. In return, we pledge our ongoing commitment to truthful, progressive journalism and serving our community. So if you’re able, please consider a small recurring contribution. Thank you—you are appreciated!
CONTRIBUTE NOW