On Monday, King County Executive Dow Constantine signed a renewed, regional plan to address climate change over the next half-century. The exhaustive, 151-page Strategic Climate Action Plan (SCAP) consists of an update to climate goals the county established in 2012, and lists 70 (!) ways to get there.

The five-year plan is split into two parts. The first pledges to reduce King County greenhouse gas emissions 80 percent by 2050, and the second maps out how the county will adapt to climate change.

The plan reflects an ongoing effort by small, progressive governments to take action on climate change when state legislatures and Congress remain stymied by Republican climate deniers. It also serves multiple purposes, because much of the county's climate mitigation strategies consist of stuff we probably already want. Take doubling transit ridership by 2040, for example, or reducing car travel.

One problem, though, is that none of the county's climate goals are enforceable laws. King County doesn't have the power to regulate emissions; it can only become radically more efficient in its energy choices and investments. A downside to the voluntary climate plan is that the county probably won't reach the near-term goals it already set for itself back in 2012, and the plan acknowledges that the county's not currently on track to reach some of its long-term goals either.

Still, the county aims to catch up to speed through 70 "priority actions." In addition to the transit ridership goal, these include reducing building energy use 25 percent by 2030, phasing out coal-fired electricity sources, and focusing housing growth in urban areas.

But there's also a lot more to those 151 pages. Here are the main takeaways:

• The King County plan's single largest reduction in greenhouse gases comes from switching to clean electricity, but King County can't just force Puget Sound Energy rid itself of coal, which makes up about a third of its energy portfolio. Thus, the plan aims to "create a framework with Puget Sound Energy and Snohomish PUD for the electricity supplied to King County facilities to be carbon neutral." Working with PSE is a start, but cutting PSE's reliance on Montana's Colstrip plant—one of the biggest greenhouse gas emitting power plants in the country—requires state or federal action.

• Transportation is the biggest local emitter of greenhouse gases; burning "gasoline, diesel, natural gas, and other fossil fuels" produces nearly half of our overall emissions. Luckily, expanding the transit system and increasing ridership is one thing that King County can impact directly, and that does take out a large chunk of those transportation emissions. King County aims to double transit ridership by 2040 and make its own fleets' fuel mix 15 percent cleaner by 2030.

• The new plan also aims to cut vehicle miles traveled (VMT) 20 percent by 2030. The best way King County can do this is to focus on expanding transit and access to transit. This is also where "transit-oriented development" and affordable housing comes into play. More affordable housing located closer to where people work means less driving.

• The plan also sets a goal of making electricity in King County facilities fully carbon-neutral by 2025, planting one million trees in King County by 2020, and reaching a 70 percent recycling rate within five years. 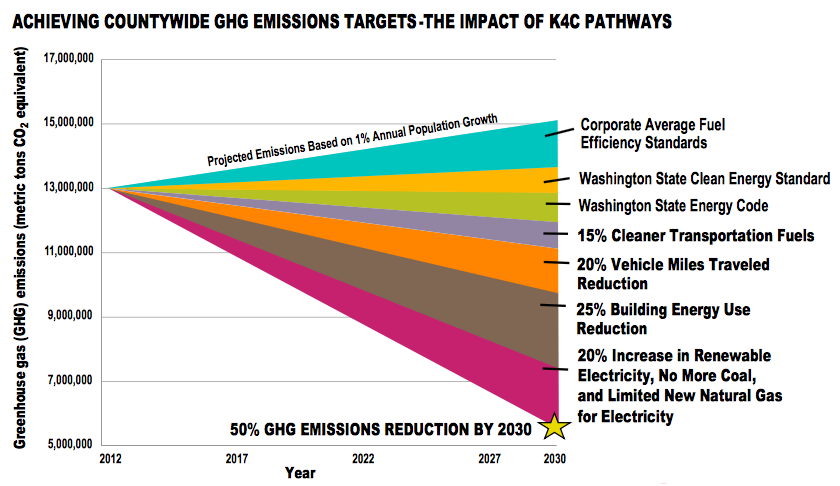 If we can pull off the latest climate plan, this is what it'll look like. King County

The goals are laudable, which is why it's a bummer to point out that the word "goals" doesn't sound very reassuring in the absence of a sane set of national and state climate policies. Still, Constantine seemed determined, and climate reports will track annual progress against the new plan.

At least we live in a county where local legislators are actually doing something about the changes to come instead of debating whether climate change is real. The second part of the report focuses on adaptation, which is best accomplished locally.

For example, starting this year, King County's wastewater treatment division will work with University of Washington climate scientists to assess how changing precipitation patterns might affect flooding and its facilities. The King County International Airport has also already taken steps to adapt to increased flooding by evaluating its stormwater system, and soon the county will look at how flooding around the airport might interact with the Lower Duwamish Waterway's levee network. The plan's adaptation strategies range from protecting salmon to running heat wave drills, and they're based on some pretty comprehensive and up-to-date regional science.

There's no doubt that we need a global agreement in order to mitigate the global problem of climate change. Hopefully that happens in Paris within the next two months. But here's another way to think about the value of regional climate plans: They're opportunities to fashion cities into more efficient and more equitable places from the bottom up.

While we're doing all this work to adapt to sea level rise and more extreme weather, municipal governments will have new incentives to invest in communities hardest hit by some of these changes. If there's an upside to man-made climate change, it's that we have unprecedented opportunity to reject outdated norms and build the future we want on a local level.

Comments 7
Tags: News Blogs Enviro
The Stranger depends on your continuing support to provide articles like this one. In return, we pledge our ongoing commitment to truthful, progressive journalism and serving our community. So if you’re able, please consider a small recurring contribution. Thank you—you are appreciated!
CONTRIBUTE NOW