Contract negotiations with the Seattle police union—the city's "Super Bowl of police accountability," in the words of the Community Police Commission co-chair—are underway. But they're shrouded in secrecy. Ansel Herz

Remember when Seattle Police Officers Guild (SPOG) president Ron Smith got in hot water for ranting on the union's Facebook page about the Obama administration's "war" on police? I called him out on it, he refused to recant, then Mayor Ed Murray called him out on it, and then he quietly removed the offending post. That was August.

This week, SPOG engaged in similar rhetoric on Facebook.

On Tuesday, a prominent group of national Black Lives Matter activists, including Deray McKesson, released an analysis of police union contracts across the country called Check the Police. The activists pointed out parts of Seattle's police contract as obstacles to accountability for misconduct, including provisions that purge disciplinary files older than three years, provide officers with advance notice of interviews regarding officer-involved shootings, limit civilian oversight, and void disciplinary decisions because of arbitrary deadlines. (SPOG claims the city cannot fire Cynthia Whitlatch, the officer who arrested William Wingate for walking down the street with a golf club, because of the clause related to deadlines—an argument Pierce Murphy, SPD's top civilian oversight official, rejects.)

Yesterday, a post appeared on the Seattle Police Officers Guild's Facebook page linking to Check the Police with the caption: "Yes folks... We are under attack... All the while other unions (Teachers) get a free pass when they break the law..." 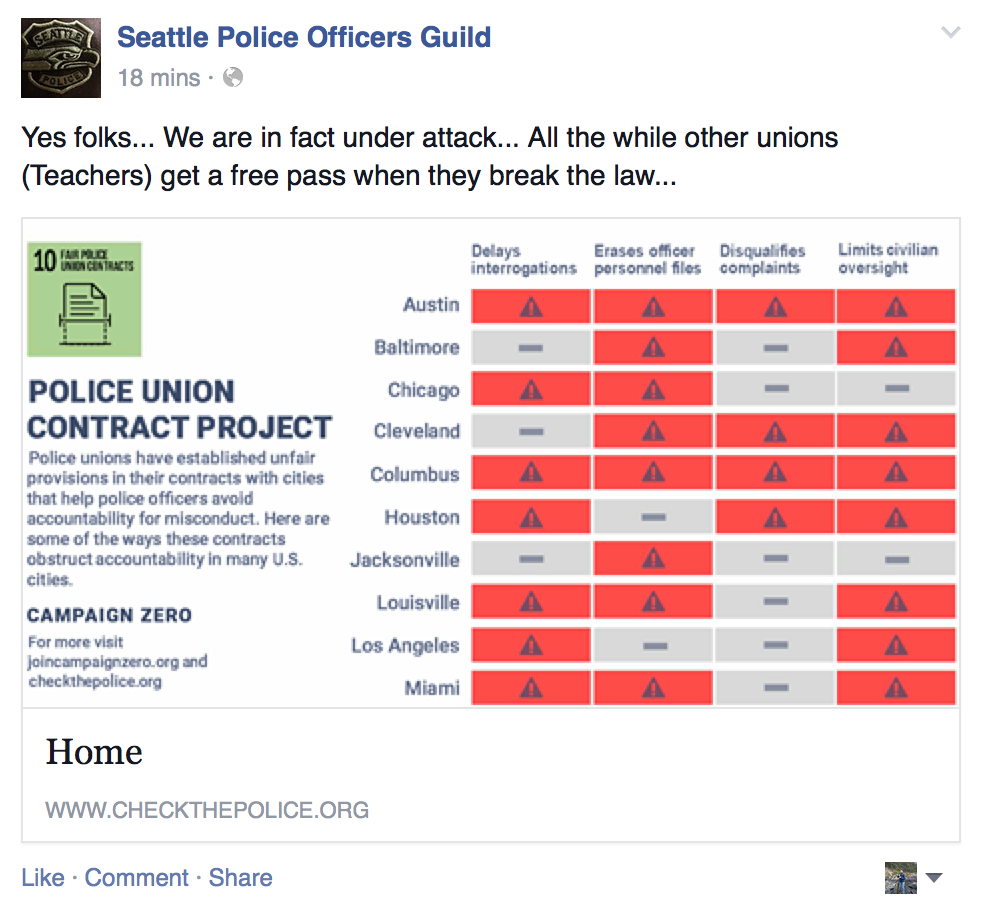 First off, Check the Police isn't "attacking" the police, and to equate policy-based criticisms with an overall "attack" sets up an us-versus-them mentality that further strains relations with the community. The city's own Community Police Commission has also called for reforming some of SPOG's contract provisions, including suspending the 180-day deadline on investigations of officers in cases of alleged criminal misconduct.

Second, you'd think that as a union, SPOG feels some kinship with other unions that represent rank and file public employees. But there it is—a jab at teachers' unions that might be a reference to Seattle teachers who went on strike earlier this fall (in large part due to the legislature's failure to properly fund education).

This is another example of the often tenuous, conflicted relationship between police unions and most (classically liberal) unions. Earlier this year, a United Auto Workers local called on the AFL-CIO to kick police unions out of the federation because of their attempts to shield officers from accountability.

Eugene Schubeck, an officer whose shooting forced the city into its largest-ever settlement related to police violence, liked SPOG's Facebook post. In September, Schubeck signed a petition calling for Black Lives Matter to be classified as a "hate group and terrorist organization."

Unfortunately, that process is shrouded in official secrecy because of city and state labor laws. And SPOG doesn't want you to know anything about how those negotiations are going and whether those accountability reforms are being achieved:

When contract negotiations began at the start of 2015, Mayor Ed Murray rejected a request from the Community Police Commission to arm the negotiators with technical advisers on accountability. In March, he angrily told me that to do so would violate labor laws.

"I haven’t said it’s my way or the highway," Murray said. "I’m a Democrat who strongly supports the collective bargaining process." I asked what reforms he would be pushing for in the negotiating room, but he demurred. "I think it would be incredibly inappropriate [to answer], and every Democratic mayor in America would not say much more than I said," he said. (SPOG endorsed Ed Murray for mayor in 2013 and gave him $15,000 in campaign contributions. Upon election, Murray appointed longtime SPOG member Harry Bailey as interim police chief. Bailey tried to reverse misconduct findings, until it turned into a scandal.)

But in August, when SPOG's Smith claimed that Obama is waging war on police departments—a particularly inflammatory claim considering the Department of Justice-supervised SPD reform process meant to curb excessive force and biased policing—the mayor acknowledged, "I've gotta find a way to bring this union along. But this is not a good sign. I have no positive spin that I can put on something like that."

Ron Smith, the police department, and the mayor's office did not immediately respond to a request for comment for this story.

Comments 33
Tags: News Blogs Crime
The Stranger depends on your continuing support to provide articles like this one. In return, we pledge our ongoing commitment to truthful, progressive journalism and serving our community. So if you’re able, please consider a small recurring contribution. Thank you—you are appreciated!
CONTRIBUTE NOW