Right before Thanksgiving, I reported on a post that had been circulating on white supremacist website Stormfront. The poster advertised a December 6 rally in Ballard and Capitol Hill for "Martyrs Day," a local racists' holiday that has traditionally taken place on Whidbey Island.

I called almost every Ballard venue I could think of, but no one had heard of the bands Ironwill (not this Ironwill) and Beer Hall Putsch, who appear on the flier for Martyrs Day 2015. When I asked Andrew Greenwald, secretary of the Salmon Bay Eagles (a fraternal order with a big hall in Ballard), about the possibility of renting to white supremacists, he said, "We would never rent to them. We're a fraternal order and we believe in equality. We would hit them in the nose." (Note: The Stranger does not condone violence.)

Dave Neiwert, a local journalist who's also a correspondent on Northwest white power groups for the Southern Poverty Law Center, told me he also couldn't confirm the show.

"However, we have learned a bit about the folks planning this," Neiwert said. "It’s definitely not a hoax — however, we’ll have to see whether anyone actually shows, too."

Local antifascist groups are planning a counter-protest. Rose City Antifa, a "secretive, militant" group out of Portland, put out a "call to action" earlier this week:

The Northwestern Hammerskins have threatened to march on Capitol Hill in Seattle, and antifascists must turn out to defend the streets. The fascist march is planned as part of the annual Martyrs Day celebrations that the Northwestern Hammerskins are hosting in remembrance of  Robert Jay Mathews of the white supremacist terror cell, the Order, who died during a shootout with law enforcement at Whidbey Island on December 8th 1984. In the past this event has been a smaller affair held on private property. This year the NWHS have boasted a larger planned attendance and have announced a more public appearance, which represents a dangerous escalation of tactics. We must not allow them to be further emboldened. Particularly in light of the recent upswell of fascist violence regionally and across the nation, we must vigorously oppose any effort by fascists to claim space and spread fear.

We will gather in the north end of Cal Anderson Park, Seattle at 5pm on Sunday December 6th. Please bring flags and banners so that it is clear that we are antifascists opposing the neo-Nazis. While covering your face is not mandatory it is a good precaution to take to prevent the police or neo-Nazis from taking your picture.

Antifa groups are using the hashtag #defendSeattle as part of their strategy. Fliers with various contact e-mail addresses like the one below have also been making an appearance on the Hill: 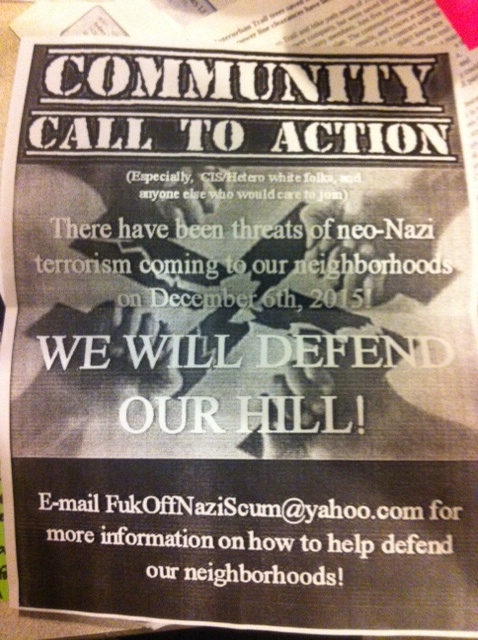 The smaller type under the title reads: "Especially, cis/Hetero white folks, and anyone else who would care to join)." SB
Comments 81
Tags: News Blogs Horrors
The Stranger depends on your continuing support to provide articles like this one. In return, we pledge our ongoing commitment to truthful, progressive journalism and serving our community. So if you’re able, please consider a small recurring contribution. Thank you—you are appreciated!
CONTRIBUTE NOW