Seattle Light Rail Station Escalators Are Bad, Bad, Bad and I Got a Thick Ass Document to Prove It

Sound Transit's light rail station escalators malfunction so frequently that the report containing all their recent breakdowns was so massive it crashed my computer. Three times.

During 2017 and 2018, according to documents obtained by The Stranger, the escalators in Sound Transit light rail stations broke down 2,115 times for a total of 19,289 hours. That's over 803 days. In that amount of time you could go to Mars and back 1.5 times. You could get your associates degree. You could have at least 115,734 standard bowel movements (they should take no more than 10-15 minutes, if it's more you may have hemorrhoids. Ask your doctor). Of that stalled time, 8,221 hours of escalator downtime came straight from the dreaded University of Washington light rail station.

The UW station has 13 escalators. That's a lot of room for a lot of fault, especially when the escalators are already temperamental. If you traveled there at any time in the last—well, since the station opened—you've probably been driven to the point of breaking—to the point of just hurling yourself into the abyss because it would be quicker—since the escalators were (are) sitting unused and broken behind a yellow "do not enter" gate.

Or, maybe you've felt special, like you were a doctor observing surgery, the patient splayed out and gutted before you. 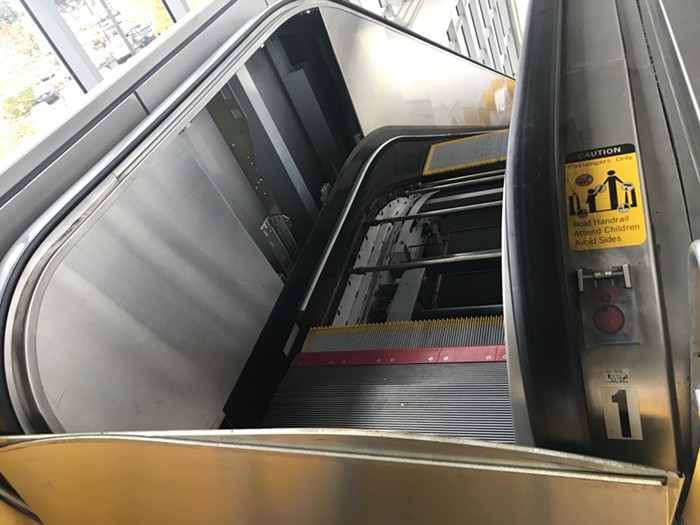 u ok?
This is a gripe of mine as a UW station dependent. Lots of people feel the same way. Sound Transit knows it's a problem. They made this piteous, apologetic Power Point about it.

The resulting data proves my hypothesis that the UW station escalators were manufactured with a lot of shrugged-shouldered best guesses, a variety of Fabergé eggs, and an endearing, but misplaced, faith in The Almighty. The UW station escalators break down 4.5 times more often than the ones in the Capitol Hill station. Both stations opened at the same time in 2016.

There were 1,070 outages at UW station from 2017 until late October 2018 (the date I requested these records. It took the ST team about six weeks to compile, a valiant feat considering the mounds of data.). Of those outages, the top three root causes were mechanical failures (186), a safety device triggering (284), and "TBD" (369). There are more causes, but for the majority of outages, Sound Transit has no idea what the fuck is going on with their escalators.

If we're talking about how many hours incurred by each of those breakdown causes, it feels a lot more drastic. "TBD" caused around 1,566 hours of outages, safety devices caused 1,617 hours, and mechanical issues caused 3,212 useless hours.

"The escalator stopped for no apparent reason," is a phrase that crops up over and over in the comments on the data.

"Horseplay" causes a lot of the shutdowns, too:

"On 10/13/18 at 5:45 PM. Video shows horseplay on escalator appears an individual launches from the fifth step up and lands hard onto the comb plate shuts unit down."

The comb plate is that kinda grate-looking thing at the foot of the escalator. It's the transition zone between non-moving ground and the moving steps. A lot of malfunctions happen because there's too much weight on the comb plate—something everyone must walk over in order to ride the escalator, something that's seeming more and more like a privilege. Impact on the comb plate accounted for 207 shut downs and about 893 hours of downtime:

There were three times where the comb plate got too cold and shut down for about 20 total hours.

The escalators, more or less, have a mind of their own. Sound Transit is merely a puppet—the escalators? The puppet master. Dance, monkey, dance, the escalators mutter as they break down left and right. The Stranger reached out to Sound Transit for comment, they did not immediately respond.

This wouldn't be such a big fucking deal if Sound Transit had implemented better stairs in their original designs. By March of 2019, an emergency staircase will be open for permanent use. Between 2019 and 2022, two of the down escalators at UW station will be turned into permanent stairs. It will cost $20 million.

All of the escalators will also be replaced with better escalators by 2022.

By the time the rest of North Seattle gets light rail, UW station will get stairs. The new stations currently in the works have been redesigned to add stairs.

In the meantime, be careful how hard you step on the escalator or you may trigger a shutdown. I'd suggest you take the elevator, but the elevators also break down.

…is there even a god?
At all of Sound Transit stations, elevators broke down for 9,548 hours. But, that's an issue for another time. For now, maybe invest in some climbing gear and just rappel down the walls. (Note: The Stranger is not liable in case you decide to actually do it. Prayer may be more effective.)
Comments 19
Tags: News Transportation