The bipartisan group is calling on Governor Inslee to rescind the nomination of an agency board member. 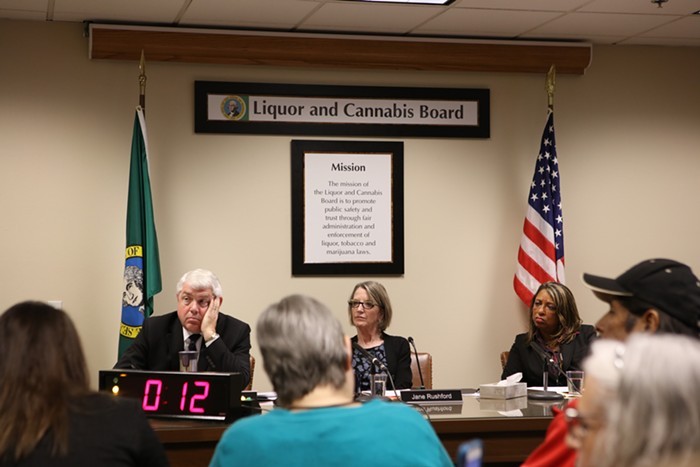 Russ Hauge, left, with LCB Board Chair Jane Rushford and Board Member Ollie Garrett Lester Black
Washington's weed regulator is in hot water after a bipartisan group of ten state lawmakers said in a letter to Gov. Jay Inslee that the agency has a “toxic culture” and called on the governor to rescind his nomination of Russ Hauge, one of the agency’s board members. The lawmakers claimed in the letter that Hauge was “either ignorant of the facts, or purposely did not tell the truth” at a legislative committee hearing this month.

The ten state lawmakers signed the letter to the governor dated Feb. 13, two weeks after Hauge testified at the House of Representative’s Commerce & Gaming Committee over a new bill that would change how the Liquor and Cannabis Board (LCB) punishes pot businesses when they violate the agency’s rules. The cannabis industry has complained for years that the LCB is too heavy-handed in how they enforce their rules, often penalizing business owners or even cancelling their licenses for infractions that would be minor in any other industry. The proposed law would change that and make it easier for licensees to correct mistakes before they get penalized.

The Jan. 28 meeting turned tense at moments, with lawmakers asking Hauge to change his tone to be less combative. And in their letter to the governor, the lawmakers say Hauge is representative of a larger cultural problem at the agency.

“We are united in our belief that you must hold the leaders at the top of the LCB accountable. Rejection of the toxic culture at LCB should start with not reappointing Mr. Hauge,” the lawmakers wrote in the letter.

Hauge, a former prosecuting attorney for Kitsap County, was appointed to the LCB Board by Gov. Jay Inslee in 2015. Inslee nominated Hauge again this year but his nomination now appears to be on hold. Last month, we broke the news that the state Senate was moving to privately confirm Hauge’s nomination. The Senate does not appear to have moved forward with the nomination since we ran our story.

A spokesperson for Inslee said the governor had received the letter and was “reviewing it” but declined to provide any additional information.

Rick Garza, the executive director of the LCB, said he still has confidence in Hauge.

“I don’t think it was Russ’s testimony I think it’s really about some of our licenses having issues with the enforcement violations,” Garza said Tuesday morning. “I just think the letter was a little over the top. It was a little surprising to me.”

The lawmakers did not specify what facts they felt were misrepresented during Hauge’s testimony.

Garza said he disagreed that the LCB has a toxic enforcement culture, but added that the agency is hiring an independent consultant to evaluate the situation.

“I do not believe that we have a toxic culture in enforcement [but] if that is what some of our licensees think then I think it’s appropriate for us to go deeper to look and see if there is a problem there,” Garza said. “I want someone to come in, not from the board, to sit down with licensees to see what is going on.”

A spokesperson for the LCB said Hauge declined to comment for this story. Garza, who has worked at the LCB for 20 years and has been the executive director since 2013, said he could not remember another instance of state lawmakers calling on the governor to rescind a board member’s nomination.

Reeves, one of the signatories on the letter, said that she has concerns with both the enforcement culture at the LCB and Hauge’s behavior in particular, especially following the Jan. 28 committee hearing.

“I have very specific concerns with Commissioner Hauge that are regardless of the culture of LCB,” Reeves said. “I think his behavior just exemplified and further reinforced kind of a gotcha culture at the LCB.”

During the Jan. 28 committee hearing Hauge had several tense exchanges with lawmakers while he defended the LCB’s enforcement actions. Hauge’s testimony was preceded and followed by pot business owners who said the LCB had severely penalized them for what they described as minor infractions. Hauge told the lawmakers that the pot business owners’ testimony did not include all of the relevant facts and said that some aspects of the proposed law would “not help the system but choke the system.”

At one point in the hearing Rep. Kirby, one of the letter’s signatories, asked Hauge to change his tone.

“Before I ask the question, Russ, just keep in mind we are not the defense counsel at one of your criminal trials so if you maybe keep that in mind when you answer the questions I think things will go a lot better,” Kirby said at the hearing.

Russ Hauge following his testimony at the Jan. 28 committee hearing. TVW
Garza said the anger over Hauge’s nomination has more to do with the broader situation Washington’s pot market is currently in. Garza said the regulatory system—created alongside Colorado’s market as the first recreational cannabis industries in the nation—was intentionally set up with especially strict penalties as a way of shielding the federal government from shutting it down.

“We have been pretty proud to say we have the most conservative regulatory system in place in the country,” Garza said. “It is meant to be that way so we don’t have interference from the federal government.”

Eight other states and the District of Columbia have legalized pot since Washington created its historic recreational pot market, while the federal government has taken an increasingly hands-off approach to the sale of federally-illegal cannabis. Garza said that it’s time for the state to reevaluate that conservative system now that five years have passed since Washington handed out its first pot licenses.

“I think this is the time, five years have passed, you have to readjust. You have to look at your penalty guidelines to remove some of the restrictions that are there," Garza said.

Garza said the agency is actively working with lawmakers on the proposed law that would reduce and mitigate penalties for infractions. He said the agency is also working on changing its own rules, with an expectation that a proposal to change the penalty system would be released in the coming weeks.