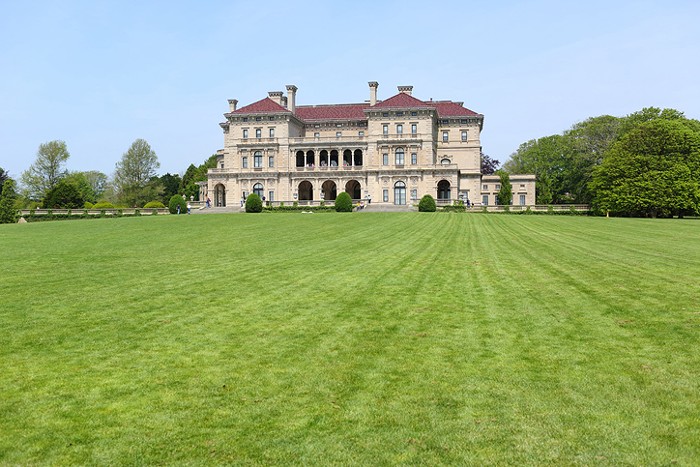 This could be a Moms for Seattle house—if it had a bit more driveway. shunyufan/ Getty Images
I was sweating. I had abandoned my car on the block below, next to some "Do Not Enter" signs, and hiked up a steep, public street in the Seward Park neighborhood. A peaked roof and big windows were the only parts of the large, modern-style house visible from the street.

I took a deep breath. I pushed open a wooden gate and then I walked along the winding wooden pathway to the front door. The door was red with square glass windows cut vertically into it.

I knocked. A beat. Then, a peal of laughter from a speakerphone inside the house. The sound echoed off the cavernous interior. "Oh my god," a woman's voice said to whoever was on the phone. "It's her."

There was another cackly, staticky laugh.

Soon, Celeste Ramberg was grinning at me through one of the vertical windows in her door. She had long hair. I could only see fragments of her through the door's glass windows, but I got the distinct impression she was wearing only linen.

"I'm sorry," Ramberg said patronizingly, seemingly performing for whoever was on the line. "I can't open the door for strangers."

"Oh, well then I for sure can't open the door for strangers," she said.

* * *
Ramberg is one of 10 women who have given $5,000 or more to "Moms for Seattle," a political action committee formed, ostensibly, by a group of normal moms who are just concerned about crime in their neighborhoods. In the span of a little over a month, Moms for Seattle has raised $183,822 from 268 donors.

The group, which is promoting the conservative candidates running for City Council, is at once everywhere—on Facebook ads, pushing out political mailers, etc.—and incredibly mysterious. On Twitter, amateur sleuths are busy trying to unearth the PAC's full paper trail and figure out whether this group is really as spontaneous and grassroots as it would like to seem. Like, for instance, why is the LLC that Moms for Seattle is using registered in Nevada? And who really registered their website?

We're still trying to figure that out, too. (More on those mysteries very, very shortly on Slog.)

But the one question I can now help answer is who these people are.

Besides, of course, being a group of "normal" moms that spends $6,605.68 for one group meeting at the Seattle Tennis Club.

Last week, I spent Thursday afternoon and all of Friday driving around to the addresses of the top ten Moms for Seattle donors and knocking on their doors. Really analog stuff. For a group concerned about Seattle, I spent a surprising amount of time stuck in Bellevue traffic to find the group's largest donor. Mostly, I learned that all of these people live in fortresses.

* * *
When I knocked on the door of the Capitol Hill home of Jeannine Navone (occupation: "homemaker"; donation: $5,133.11) she didn't answer. I rang the call button on the keypad on the stucco perimeter wall (the one right next to her "no soliciting" plaque). I took in her large, red-tiled roof.

Nothing. Fine. On to the next Mom.

I trekked up to Diane Langstraat's minimalist mansion, perched on its own hill on a relatively flat street (occupation: "retired"; donation: $5,000). Then I tried the ivy-covered house of Betsy Losh (occupation: "real-estate agent"; donation: $5,000). Neither Langstraat nor Losh answered, although at Langstraat's, at least, my knuckles connected with the front door. At Losh's, I had to ring on a keypad outside an outer wall that I presume led to an inner sanctum. I hope Losh's doorbell security camera captured my good side.

Then, Lesley Todaro (occupation: "N/A"; donation: $5,000). She wasn't at her Bryant ADHD center but her receptionist, who was being buffeted by an aggressive portable air conditioner, told me to try e-mail. Todaro did not respond.

* * *
Later, I got all turned around because I missed the Roanoke exit on my way back south. It's an unpopular opinion but I think "99 Luftballons" is the perfect driving song and I got distracted turning up the volume when it came on the radio.

The Capitol Hill mansion of Laura McMahon (occupation: "consultant"; donation: $5,000) looked like an English cottage that's imposing instead of quaint. Her gardener opened the gate for me to her front steps. I passed by the no-soliciting sign and rapped on the door with a gold knocker.

McMahon was friendly at first, apologizing for her yappy dogs. Her face hardened when I identified myself.

"You can't just show up on my property," McMahon said. She seemed to be quivering. She was involved with Moms for Seattle and had donated, she said, but she did not want to comment. "We've been advised not to say anything."

But after some light probing, it turned out that McMahon had a bone to pick with Jessyn Farrell, a former Washington state legislator who wrote a piece about how Moms for Seattle is a "phony" organization. McMahon went on a little rant, calling Farrell's writing "dirty, underhanded, and not factual." Specifically, McMahon disagreed with Farrell's claim that the group is run by white males.

According to McMahon, four moms organized the group and they are remaining anonymous because of "all the hate that's out there." McMahon laughed a little when I asked if she knew the four moms who ran it. "Yes," she said.

The group was formed because they "are tired of the situation," which, she explained, means "unaccountable government" that's not "compassionate" toward homeless people.

She said that she thinks the moms will eventually share their identities.

* * *
I assumed the other moms in "Moms for Seattle" were about to receive warnings about my home visits, so I hustled on.

The gate to the path that leads toward the front door of the lakeside mansion of Nicoline Nelson's (occupation: "N/A"; donation: $5,000) was chained shut. So, despite the odds being obviously not in my favor, I hopped in the car to Bellevue to find Katherine Binder, the retired woman and charter school advocate who had given Moms for Seattle $25,000. Binder is the single biggest donor to the PAC.

* * *
Binder lives on a cul de sac of mansions. Their back yards kiss Lake Washington. Binder's gate was ajar as if she was waiting for me. Her house was a certifiable luxury compound—a huge lot and a sprawling home with its own roundabout in front, like they have at hotels. I will admit that I was terrified to traverse what felt like a mile long driveway to her front door. But I did it (cue applause).

I knocked on the door looming before me. Then I rang the doorbell because who could hear a knock in a house that big? There was an Amazon package resting against the door. I guess no one was home. I had a faint hope that maybe Katherine Binder would talk to me and also invite me in to use her restroom. I really had to pee. No such luck.

As I left, I heard whoops and hollers coming from a speed boat doing zig-zags on the lake behind her house.