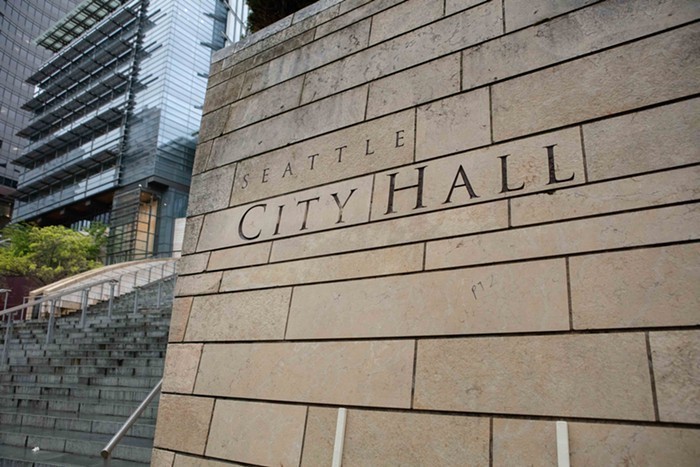 Despite King County & Seattle – Public Health warning of the current massive spike in COVID-19 cases, the Seattle City Council voted 5 to 2 on Tuesday to end a year-and-a-half-long hazard pay mandate on grocery stores with over 500 employees. The vote came at the direction of Mayor Bruce Harrell.

Effective 30 days after the Mayor signs the bill, the City will no longer require grocery stores to pay their workers an extra $4 to compensate for the risk to their health while working on the frontlines of the pandemic, meaning some non-union workers will see their wages slashed by up to 20% and many union workers won’t see that same pay for another three years under their new contract.

During public comment, grocery workers implored the council to continue hazard pay. They argued that as new, more contagious strains of COVID-19 continue to infect frontline workers, the council should stand with essential workers and not the grocery industry that has only profited from the pandemic, regardless of whether or not other cities have already turned their backs on their workers.

"You don't care if we live or die," one speaker said, concerned that this vote marked the council's seventh attempt to end the hazard pay requirements.

Councilmembers Kshama Sawant and Tammy Morales were the only members to listen to the workers. Both voted to keep the measure.

"Grocery workers and all frontline workers have made incredible sacrifices during the pandemic. They deserve a raise, not a pay cut," Sawant said.

Morales cited the ongoing health crisis as the reason she voted "yes."

All other council members voted “no.” Councilmembers Lisa Herbold and Teresa Mosqueda, the original sponsor of the hazard pay bill, did not attend the meeting. Mosqueda also skipped the last meeting, where the council initially planned to vote on the measure before suddenly deciding to postpone. She requested that absence to spend time with family “like many people,” according to her spokesperson. I asked her office why she skipped this meeting, too, and will update when I hear back.

A spokesperson for Herbold's office said she requested today's absence two weeks before the Mayor transmitted the legislation.

Since the council originally passed hazard pay in February of 2021, council members assured the public that data and union input guided their decisions on the future of the mandate. At the time the council enacted the original bill, the New York Times reported over 300 daily cases of COVID-19 in King County.

The council met several times to discuss the future of the mandate before voting to end it in mid-December of 2021, when COVID-19 cases had dropped slightly but deaths had increased, according to the New York Times. In a matter of days, the public health crisis took a turn for the worse. In less than two weeks, COVID-19 cases increased three-fold, with no peak in sight.

At that point, then-Mayor Jenny Durkan stepped in and vetoed the council’s decision, which just days later seemed too cruel even by Mayor Tear Gas’s standards. In late January, a majority of the council voted to sustain the Mayor’s veto and continue hazard pay. At that meeting, Councilmembers Sara Nelson and Alex Pedersen, who argued for a return to normal, voted no. Mosqueda didn’t bother to show up. At the time, COVID cases soared to a daily average of nearly 5,000 in King County.

The council could make the argument that the hazard has decreased from its height since their last vote over the legislation, but COVID-19 is over twice as prevalent as it was when the plight of frontline workers first tugged at the council’s heart strings in February of last year.

As one commenter said in the last meeting, "last I checked, COVID is still a thing." This month, public health experts have sounded the alarm that COVID-19 is alive and well in the county. The King County COVID-19 dashboard reported a 7-day daily average of almost 700 cases. This figure is much lower than when the council reversed course and sustained the Mayor’s veto, but local experts said the dashboard presents what is likely an undercount because of the increased availability of at-home testing. According to Bloomberg, in the age of at-home testing, the true COVID-19 levels in a given community is likely up to 3 to 31 times the official count.

But there’s another force pushing the decision-making on hazard pay: UFCW 3000. The grocery workers union wanted to fight for wage increases in its new contract to avoid a patchwork approach to wage increases in a “permanently hazardous” industry, according to the union’s Secretary-Treasurer, Joe Mizrahi.

Mosqueda has voiced this point-of-view on council since last December, saying the council’s pay bump was never intended to replace permanent wage increases. And the grocery industry agrees with her. A representative from QFC spoke at the council meeting, boasting about the historic union contract and encouraging the council to "sunset" hazard pay.

When the council upheld Durkan’s veto, it gave UFCW 3000 time to finish up negotiations. This spring, the union won a three-year contract for the 50,000+ workers it represents across the region.

That contract gives the “most veteran” workers raises of $4 to $9 over the next three years. That still amounts to a temporary pay cut, as many will not regain the $4 pay bump until May of 2024. The union seemed to negotiate hazard pay away anyway. According to the contract, the first pay increase would go into effect on the first day of the contract or on the first Sunday after hazard pay ends, whichever is later, but no later than August 28, 2022, which nearly coincides with the date when the City will end hazard pay.

However, not all grocery workers have union representation. One non-union worker told The Stranger last December that they went from earning just $17 an hour to $21 an hour under hazard pay. That meant they could afford to go to the doctor and the dentist for the first time in years. Without the City’s mandate or a union, workers like them will get a serious pay cut.

A worker spoke directly after the QFC representative and said, "It's very telling that the only people speaking in favor of ending hazard pay are those at the top while those of us at the bottom die."