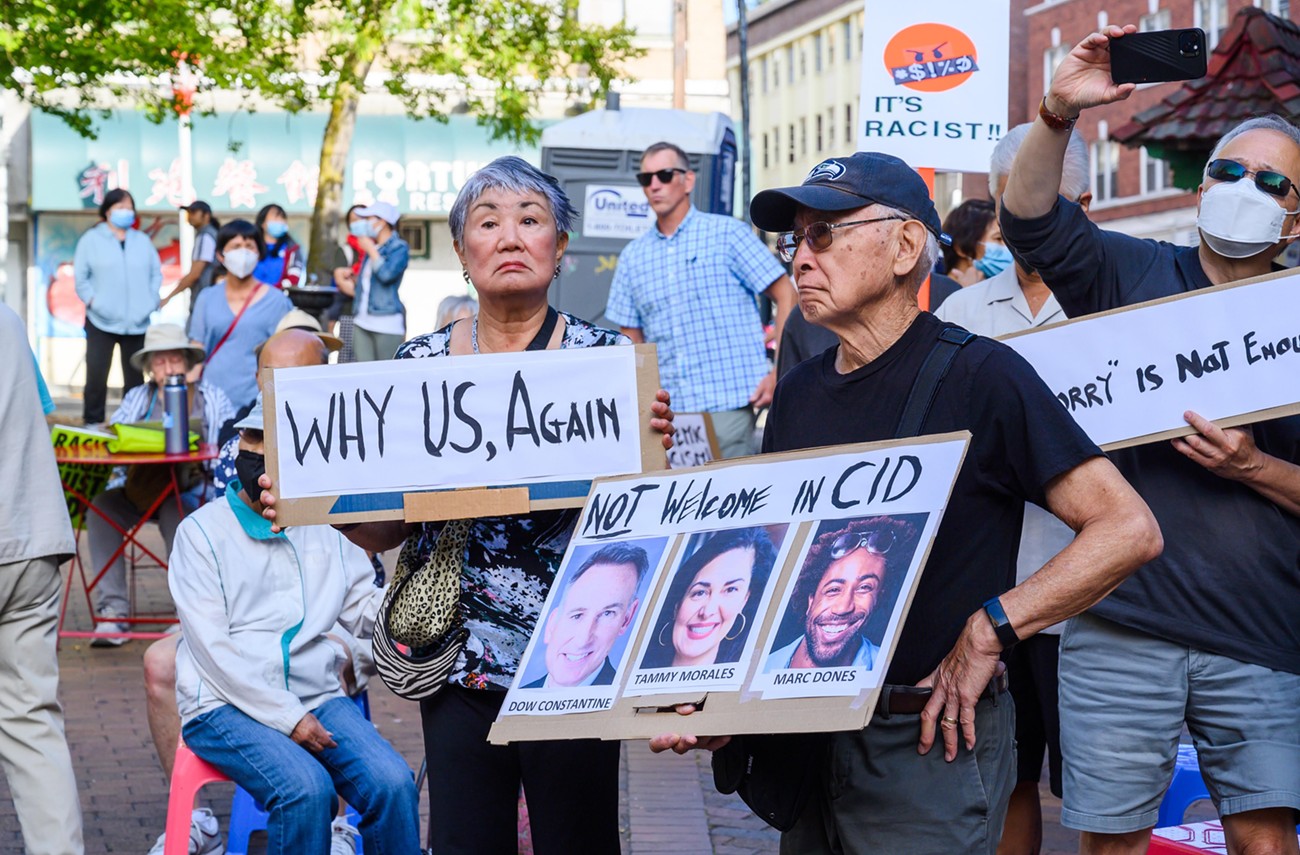 Dow Constantine, these protesters don't want you or your shelter expansion in their neighborhood. Randy Wo-Eng

Last week, concerned community members organized a rally in Chinatown-International District’s Hing Hay Park that drew mutual aid activists, NIMBYs, and Republicans to protest the temporary expansion of an existing homeless shelter, the SODO Services Hub, which some fear may bring more unhoused people and crime to the neighborhood.

Right-wing keyboard warriors branded the shelter a “Homelessness Megaplex,” and demonstrators claimed the City, County, and King County Regional Homelessness Authority (KCRHA) planned the expansion without adequate outreach to the nearby Chinatown-International District (CID), which some saw as racist. As Seattle’s homelessness crisis officially turns seven years old this November, county officials dispute the protesters' claims and argue that the shelter expansion will actually alleviate visible homelessness in the area.

In March, the County announced a $66.5 million plan to expand the 270-unit shelter that opened last summer. The plan pays to preserve the existing units and adds 150 units of shelter to the area, including 40 high-acuity shelter beds and 40 to 50 tiny shelters. The County paid for the expansion with one-time federal funding, covering the cost of a five-year lease that the County does not anticipate renewing.

Tanya Woo, a lead volunteer for CID Community Nightwatch, an organization that helped organize the rally, said that many of her neighbors only discovered news of the expansion in the last few weeks.

Under the impression that the County would add the units this fall, Woo, community advocate Gary Lee, and Interim CDA Asset Manager Julie Neilson felt the urgent need to rally the community so officials couldn’t ignore them any longer. Last week, in an op-ed for the International Examiner, Woo argued that the City’s and County’s failure to give the neighborhood a heads up continued a pattern of forcing policies onto the CID and amounted to systemic racism.

Woo has a point. The City has made construction plans in the CID a number of times without consulting the neighborhood: the Kingdome, DESC’s Navigation Center, and the light rail expansion to name a few.

However, though County representatives acknowledge the history of systemic racism endured by the CID, they argue that the protesters got some of the facts wrong.

First, for what it’s worth, the shelter stands on a 6.8-acre lot in SODO, not in the CID, though a corner of it touches the CID’s design review district. Woo argues that point isn’t worth much, as the place is visible from Uwajimaya (and The Stranger’s office, just saying).

More substantively, the shelter isn’t “new,” as some media coverage implied, and it would not displace any existing places in the neighborhood. And though organizers assumed a fall opening, the County won’t open the expansion until the end of the year at the very earliest.

Finally, County Human Services Director Leo Flor disputes the idea that the County tried to sneak in more shelter units without any outreach. In a blog post, the department said its representatives met with “more than a dozen” community organizations, including Seattle Chinatown International District Preservation and Development Authority and Friends of Little Saigon, before the King County Council approved the lease and then hosted two public meetings with translated materials afterward.

That said, if the community doesn’t feel as if the County has done enough to include the neighborhood on this issue, then Flor said his work is not done. In that spirit, he and other officials met with Woo and other concerned CID residents last week following the protest.

During that meeting, Woo said the CID advocates asked for a six-month moratorium on the expansion so that the County could conduct a more complete community engagement process. Flor said officials declined that request because, he argues, the community can still weigh in on many important decisions about the expansion given the fact that the County remains in the early stages of the process.

Not in Our Backyard

Though the community can still consult on some decisions, it is too late to change the location. And underneath the genuine concerns of systemic racism, some of the protesters, joined by the King County Republicans, levied classic NIMBY talking points against the shelter expansion–points that had nothing to do with transparency.

“It is insane, it is destructive, it will tear apart the safety residents here used to feel,” said CID resident Bettie Luke.

In this vein, Woo and other protesters speculated that the presence of more shelters would result in more visible homelessness, such as the encampment currently located outside of the existing shelter. Some protesters made the claim that increased crime would follow.

Flor disagreed with her assessment.

“This shelter is a resource to actually bring those folks inside. When we hear people talk about why they are worried about a shelter, what they're often actually describing is the conditions outside right now,” Flor said.

At the request of the CID advocates, the County said it will prioritize shelter placement for the often underserved people who live outside in the CID, perhaps starting with the people camped outside the site. Many of those people got kicked out of the current shelter but would be good candidates for the new, high-acuity programs, said Flor. He also noted that the current plan prevents the County from losing the existing 270 units of shelter. If that happened, those people could end up adding to the population living outside in SODO or the CID.

The protesters anticipated that onlookers might dismiss them as NIMBYs for marching around and saying “Not in my backyard” nearly verbatim, but Woo maintained that the shelter expansion could be a good asset for the community if the County includes them.

Besides, rally speaker Matt Chan raised the point that CID residents couldn’t be NIMBYs even if they wanted to be. He said the area is already home to many shelters, perhaps a larger share proportionally compared to other, whiter areas.

Flor said that the County isn’t specifically trying to stuff the CID with services for homeless people. For one, it's hard to find new sites for shelter, so it’s easier and more cost-efficient to expand an existing shelter. And for two, the County is building shelters everywhere, he said.

Over the last three years, the County has propped up shelters in Kirkland right next to a fancy private school, another in Redmond, another in Federal Way, one in Auburn, and another up in North Seattle. In each community, people pushed back against shelters in their backyard.

Flor said his department is happy to work with the community to address their concerns, but he also has to “listen to what people living outside have to say.” With over 7,000 people sleeping outside each night, Flor said the region urgently needs more units of shelter everywhere to bridge the gap between living on the street and permanent housing.

“So, why here?” Flor said over the phone, repeating the community’s question. “It has to be everywhere.”