Weed Lube Is Not Lube

But It Apparently Works Magic on Vaginas 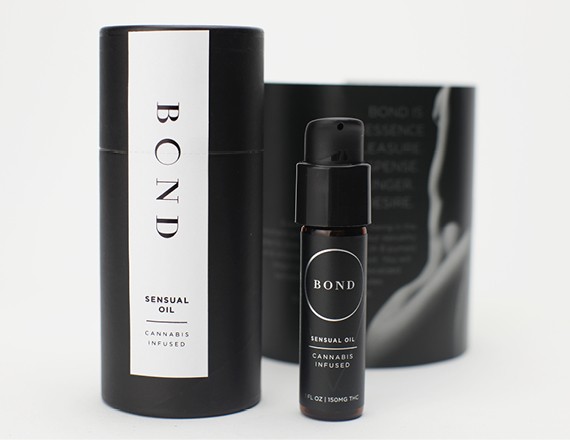 People are freaking out over weed lube. Rightly so, I guess, because it's apparently magical. But while weed lube is lubricating, it isn't lube, per se. As in, its main use is not to facilitate intercourse.

Lena Davidson, the marketing manager for botanicaSEATTLE—the company behind BOND Sensual Oil—told me that what most people would call weed lube is really more of a massage oil. Like other cannabis topicals and unlike a traditional lube, it takes 20 to 40 minutes to work and is a self-contained experience that can be enhanced by sex. Being oil-based, it is also not latex safe. People call it weed lube, she says, because we're basically all teenage boys and we can't talk about weed or sex without snickering.

As much fun as it is to giggle about getting one's "pussy stoned" (as Vice did), weed lube is serious business. Sensual cannabis oil, as it is more accurately called, has all sorts of awesome ramifications for sexual equity. Davidson pointed out that while there are more than 26 products approved by the FDA to treat sexual dysfunction in men, there is only one approved for women, and it is the subject of much controversy. Sensual cannabis oil is a long way off from FDA approval, but judging from testimonials thus far, it seems to be doing consistently what that one drug does inconsistently: increasing female sexual pleasure. Women who have used BOND reported "ethereal, long-lasting, and out of this world" sexual experiences, and the ability to rapidly "peak... and then do it again quite quickly," according to testimonials on BOND's website. Multiple orgasms are apparently common.

How does it work? Davidson writes: "THC is absorbed through the mucous membranes that are in high concentrations in a woman's vagina. Once applied and absorbed, THC acts locally on the cannabinoid receptors, much like an edible. Functionally, the THC dilates the capillaries and increases blood flow in the smallest blood vessels in our body—this enhanced microcirculation magnifies sensitivity and sensation." (She also mentioned that this same capillary reaction is what causes stoney red eyes.) The experience is not like the head high one gets from smoking or eating weed, but rather a localized sensation of pleasure, users report.

It's also important to note that, at least here in Washington, sensual cannabis oil is safe. Davidson cautioned that not all weed lube is created equal, but BOND and Ethos Extracts' Temptress are made in a WSDA-approved kitchen with food-grade organic coconut oil and ultra-pure cannabis extracts. Coconut oil, though unfriendly to latex, is ideal for internal use because of its natural pH-balancing and antimicrobial qualities.

While the potential to help women with issues such as vaginismus (vaginal pain) and low libido is great in its own right, perhaps the most exciting thing about sensual cannabis oil is that it is a decidedly non-heteronormative phenomenon. What I mean by that is it takes the focus off of the penis as the center of sexual pleasure, where it has been for far too long.

My good friend Kat, a big proponent of sensual cannabis oil and the source of much of my education on feminism, put it thusly: "It's unfortunately common during heteronormative sex that women feel like their partner's ejaculative experience is the focal point. I'm usually acutely aware of the other person's level of satisfaction, which takes me away from my own body. With the weed lube, I'm like, 'Fuck yeah, I'm getting it and it feels fucking amazing.' I'm actually relaxed and stimulated enough to invest in my own delectation."

Speaking of sexual justice, sensual cannabis oil also works well for older women—another segment of the population whose sexual lives are often not valued in the heteronormative conversation. Women's bodies produce less lubrication during and after menopause, and older women can also suffer from decreased libido and other sexual difficulties—problems that sensual cannabis oil can help with. Edward Lafferty, Ethos's CEO, said that women older than 45 and gay men make up the bulk of his business for the Temptress oil. During product testing of BOND, "nearly every woman had a 'Eureka!' moment," said Davidson. And "for women who had felt estranged from their innate sexuality by age or physical conditions, it instigated a wave of natural physiological desire."

Davidson worries that those who might benefit most from sensual cannabis oil will not do so because of the continued cultural awkwardness around weed, sex, and weedy sex. She pointed out that women are statistically less likely to try cannabis products in general, let alone walk into a weed store and ask a scruffy dude about something as personal as their sexual health. What's more, sensual cannabis oil is still perceived as a sex-shop novelty—something for young party people to rub on one another after the rave, not something that can help women have more sexually fulfilling lives.

But, as Lafferty put it, "The people who use it need it. It's important. We can be squeamish, but it works." So let's get one thing straight: Weed lube isn't lube, and it's also not a novelty. According to many of those who've tried it, it's a godsend.

Sex and Weed Are Two Great Tastes that Taste Great Together

Why I Gave Up Booze in Favor of Weed

It Helps with My Anxiety, It Doesn't Give Me Hangovers, and Are You Aware of What It Does to Sex?

Pot Can Help You Get Over Your Inhibitions