A Visit to the Rage Room 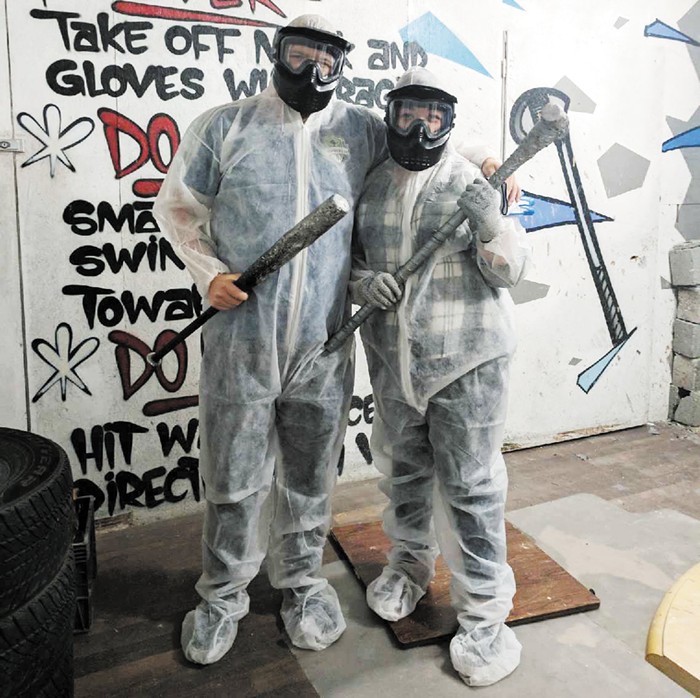 Rage industry: time to break some stuff. the stranger
Tweet

My fingertips felt tingly as I walked into Lake City's Rage Industry over the weekend. Vases, mugs, terra-cotta pots, candlestick holders, and empty bottles of Tsingtao beer and Charles Shaw wine lined the walls of the unassuming-looking building. On the opposite side of the storefront, a sign reading "Smash me :)" was taped onto a rack of dusty printers and computer monitors.

Leslie Nguyen, who opened Rage Industry in April, greeted me and my boyfriend with two milk crates full of bottles and glass tchotchkes she'd picked out for us. The concept for her business was inspired by a scene from Zombieland in which survivors of the zombie apocalypse wreak havoc in an abandoned gift shop.

"I thought, 'It would be nice to smash things without any consequences,'" she told us as we suited up into gauzy coveralls, plastic face shields, and gardening gloves before heading to our final destination: the rage room.

I needed it. The weekend before, I'd listened as President Donald Trump equated the white nationalists who swarmed Charlottesville with the counterprotesters who showed up to condemn their hatred. As the president said there was "blame on both sides," the image of a sports car bowling through a crowd of protesters flashed through my mind. I'd never previously thought of myself as an angry person, but in that moment, I was livid. Even after a week of venting to friends, smoking a few too many bowls, and rage-eating too much ice cream, I still wanted to break something. It was time for a visit to the rage room.

The rage room had a wall lined with smashing implements—golf clubs, baseball bats, sledgehammers, claw hammers, crowbars, and a dented saucepan—and the far corner of the room was fortified with cinder blocks "perfect for smashing bottles," Nguyen told us.

Before we arrived, I'd considered rewatching Trump's Charlottesville speech, looking at my student loan statement, or reading through Slog comments to psych myself up, but I didn't need to. As soon as Nguyen left us alone in the rage room, I picked up a Jarritos bottle and hurled it across the room as hard as I could. As the bottle exploded against the wall, some of that pent-up anger finally began to give.

Soon we were pitching Heineken bottles to each other to smash with a bat. Geto Boys' "Damn It Feels Good to Be a Gangsta" blared from the speakers on my boyfriend's phone. ("Like Office Space. Get it?" he asked. I did not.)

We took turns flinging wine bottles across the room, some bouncing off the walls intact while others shattered into tiny green gems. We played golf with teacups and vases. I obliterated an oversize wine bottle with a sledgehammer and hurled a rubber tire across the room. The loud thud against the wall gave me a deep sense of satisfaction.

Eventually, our stockpile of glass and ceramic ran out. We had been at it for barely 10 minutes, but we left the rage room looking like we had won a bar brawl against some fraternity brothers. We were sweaty and we couldn't stop giggling.

"Do you feel better now?" my boyfriend asked me as we watched another couple fill up a box with doomed glassware.

I did. And under the Trump presidency, I might just become a regular rager.