The Stranger Crashes a Mosh Party in Wedgwood

It's the return of our party crashin' column! The birthday boy is on the floor. Photo by Christine Mitchell, Courtesy of Actionesse
Where: A house in Wedgwood
When: Friday, October 19

Moshing on carpet is a special privilege. It is a right granted only to those who know someone who doesn't care if their living room is turned into a pit. Most people would be furious if their sweet carpet was pounded by the Vans of dudes wearing bucket hats, but the nice bandmates who invited me to their Wedgwood home for a 30th birthday party/house show weren't like most people. These were men who invited five bands, a group of strangers, and a writer from The Stranger to their house on a Friday night; twentysomethings who had twentysomething types of toothpaste in their bathroom; guys who labeled their music "post-horncore"—a genre that appeared to be made-up or singular to them. These were people who liked to party, and they wanted to show me how they did it.

The night started with a 12-pack of Modelo, which my boyfriend and I picked up at a North Seattle 7-Eleven courtesy of Stranger writer Nathalie Graham and her lumbering Chevy Tahoe. "Don't worry, nothing's taking this car down," she said after driving over a sidewalk. We trusted Nathalie to get us to the Wedgwood countryside because she calls the neighborhood home, but I must admit, we were worried when she yelled, "DAMN, AM I DRIVING OFF A CLIFF!?" while we tumbled down a steep, dark hill. "This is where it says the party is," I double-checked, before getting out on a deserted street at a black trail that seemed to lead to Lake Washington. "I'll text you at midnight to make sure you're still alive," Nathalie said before speeding away from the nightmare lane.

The sound was coming from a home located behind a row of tall hedges, a landscaping choice I always thought was creepy but now understand is ideal for throwing house shows. Two white dudes in skinny jeans stood outside smoking. I considered introducing myself but realized that would be weird and made for the front door. No one questions people who bring beer.

Inside, we were greeted with noncommittal glances from more people wearing skinny jeans and oversized tees. The men's hair was as long as the women's, either out of solidarity, style, or laziness. A drunk woman in the corner yelled, "It's not a school night! She's fine!" Unsure who she was talking about, I couldn't verify if she was fine and made for the kitchen, the true heart of a house party.

The kitchen was a textbook example of a house party kitchen. Six or seven people huddled around counters littered with frat boy foods: bowls of Doritos, a tray of pizza pockets, glass gallons of tequila, little Solo cup shot glasses, empty cans of beer. In the corner, two guys bogarted a giant barrel filled with ice and Rolling Rock. We plopped down our 12-pack and went to watch the bands.

Dusty were just finishing their set to a crowd of smiling, drunk, swaying young people crammed into a living room with popcorn ceiling and a precarious overhead lamp. The alt-rock three-piece brought a compact rowdiness that ricocheted off the mattress pads covering the windows behind them. (We missed Kickin' Names and Narrow Tarot, who played earlier. Sorry!) As they finished, a drunk blonde girl next to me looked at a guy holding a jar of cash for show donations and slurred, "You. You have all the money. All the money in the world!" "Nah," he replied. She waved and slunk outside.

People spilled onto the lawn to smoke between sets. Everyone was gentle and drunk. Paddy, the guy who invited us and also the bass player for Actionesse, was busy loading the next band into the house. We admired Paddy's mustache from afar and enjoyed the anonymity that's afforded when going to a rando house party.

Our chill high was elevated when the next act, Bad Optics, took things to a new, nuts level. The band, which shouted that they were from Louisiana (we were later told they were from Seattle), would have been at home on New Orleans' Frenchmen Street. The lead singer looked like a crooked Timothée Chalamet, and their forceful, pretty shouting quickly got the whole room moshing. A cute boy drinking out of a plastic Pizza Hut cup slipped to the side as a skinny ogre rammed into me, making me knock down my boyfriend's beer. He picked it up and reacted to the party foul by fleeing to the kitchen. 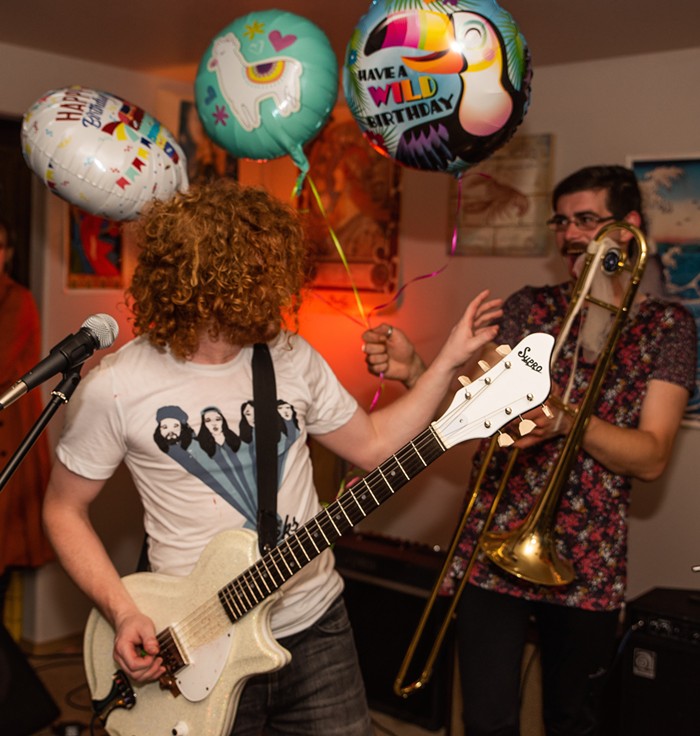 Birthday boy got balloons and a pie. Photo by Christine Mitchell, Courtesy of Actionesse
Finally, it was the birthday boy's turn to play. Actionesse, the "post-horncore" house band, was equipped to get loud with horns and Paddy on a bass guitar with a riff that The Stranger's Dave Segal described as being unable to "decide whether it wants to beat you senseless or impregnate you." (Damn, Dave.) Shit got full-on moshy as the birthday boy went from rocking out on top of a piano to splatting onto his back on the floor—all while still playing the guitar. It was exactly like this video, but with more people:

During the screaming, I heard one drunk girl ask another girl, "Where are you from?" She replied, "From the back!" referring to the back of the room. With this level of chaos, maybe that clarification was helpful.

The night ended early, around 12:30 in the morning, but we had enough beer to fill us up for a week. Stunned partygoers stumbled out onto the street. We met Paddy on the way out and congratulated him on a great party. Who knew a man with such a bulging bass riff could be so nice?