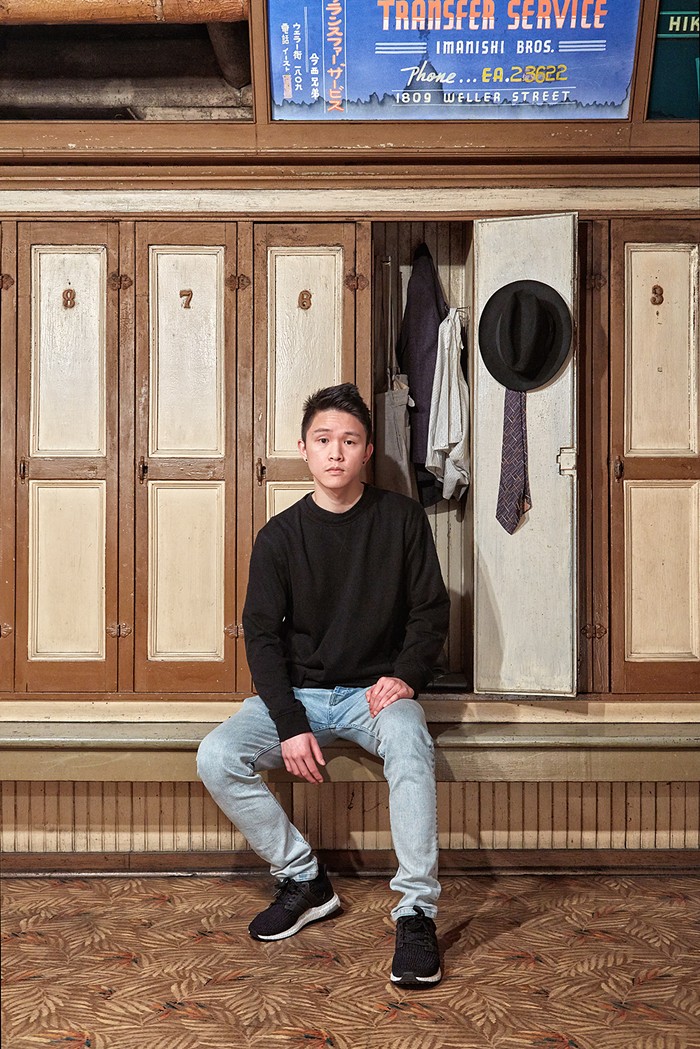 As a grade-schooler, Troy Osaki had already accepted that his dream career as a musician wasn't going to pan out. His love of Blink-182 and Taking Back Sunday couldn't make up for his inability to keep a rhythm—or sing, for that matter. Osaki, who is Filipino and Japanese American, later turned to spoken-word poetry while he was a student at Garfield High School, eventually signing up for Cafe Allegro's open-mic poetry night and finding a writing community at Youth Speaks Seattle, a youth literary arts organization.

Poetry became a source of therapy for Osaki after five teenagers were fatally shot in Seattle in 2008, one of whom was 16-year-old Quincy Coleman, a Garfield High School student gunned down on campus. "I began to learn how poetry can be used as a tool to reflect and process what is difficult and complicated to understand," Osaki said. "I now write in hopes of building a safe and just place to live by reimagining the world through poetry."

Osaki, 24, is now a full-time Seattle University law student and fellow at Kundiman, an organization supporting Asian American writers. "I specifically focus on stories of my family's diaspora to honor their efforts and sacrifices in supporting me," he said. "From my grandmother's experience with incarceration during [World War II] to my grandfather's immigration from the Philippines during Japanese occupation, I'd like to work to keep their legacies alive by sharing our family's stories through poetry."

I focus on race and social justice in my writing because I believe poetry has the ability to shift dominant culture and to change people's hearts and minds. I think this is important because I believe legal solutions (laws and policies) are limited and can't transform our brutal system alone. However, poetry can help build community power—and I believe community power is what it will take to achieve social change.

What was your experience like learning about Asian history in school?

Up until college, I rarely learned about Asian or Asian American history in school. Looking back on my grade school, middle school, and high school experience, I realize I felt a disconnect between myself and my heritage.

However, once I was accepted into the University of Washington [as an undergrad], I majored in American Ethnic Studies with a concentration in Asian American Studies. This was one of my most meaningful experiences in academia because it was one of the first educational spaces where I got to learn about my family's history, my cultural background, and Asian and Asian American resistance. Some of my favorite poems I've written, like "Morning Service" and "Year of the Dragon," were inspired by those classes.

I think the lack of Asian representation in media and the whitewashing of Asian characters in Hollywood continues to reinforce the idea that Asian folks can't be the hero, can't be complex or nuanced, can't be desirable, etc. As a result, Asian folks are still seen as quiet, passive, easily exploitable, invisible, and foreign.

This lack of representation in dominant culture affected me growing up because folks felt like I was an easy target to pick on and bully, since Asians were never expected to fight back. In other words, middle school was tough, man!

How can the city better support people from marginalized communities?

I think diversity and inclusion aren't enough, and the city can better support people from marginalized communities by serving their needs through a redistribution of material resources. For example, declaring the state to be a "hate-free zone" is great—however, what is being done to support black, indigenous, and undocumented communities that are targeted with hateful violence by the state through displacement, deportation, and gentrification?

Which local organizations should everyone know about and support?

Youth Speaks Seattle, a youth literary arts organization dedicated to creating safe space for young people to write, share, and perform poetry. YSS gave me the tools and support to start writing and helped me take the first step in developing my political analysis. Catch their open mics and writing circles every first Sunday of the month at the Station Cafe on Beacon Hill 4:30 to 8:30 p.m.

Anakbayan Seattle, a youth and student movement working to address issues affecting Filipinos in the United States and the Philippines. We're currently working on a rad campaign called #TakeBackOurEducation to demand a reallocation of funds from the military to schools, to include relevant curriculum reflective of all people's histories in class, and to cancel all student debt. Catch our next general meetings on March 23 and April 27.

Creative Justice, an arts-based program for court-involved youth to develop creative skills, gain mentorship and communities of support, and obtain court-related benefits. If you're a young person or you know a young person who is caught up in the court system, feel free to check if this program can be of service to you. Creative Justice provides a stipend, hot meals, and art workshops with mentor artists to young folks from across the city.

Seattle Best Tea in Chinatown-International District. Lydia, one of the owners, is really friendly and helpful, and their honey jasmine tea with boba is killer. Favorite tea in Seattle hands-down.

Are you a karaoke fan? What's your favorite venue and what's your go-to song?

Definitely a fan of kickin' it and going to karaoke with friends. I'm usually too nervous to get onstage, but when I do, I like to sing "Hey Ma" by Cam'Ron with my girlfriend. My next goal is to someday sing "Let Me Love You" by Mario. 'Ohana in Belltown and Enkore on the Ave are usually the go-to spots.

I really enjoy listening to and supporting local artists and checking out what folks around the city are creating. Recently I've been bumping Ariana DeBoo, Northern Natives, Otieno Terry, ESSAM, and a few other folks. Additionally, my recent SoundCloud likes include cuts and mixes by Andre Power, Masego, Fortune, and Mona-Lxsa. Been meaning to check out the latest by Big Sean and Future, too.

I'm tired of people complaining about communities of color and marginalized communities protesting, marching, and rallying for a safe and just world.

I'd like Seattle to rely less on prisons, jails, and the police state and focus more on distributing material resources to marginalized communities such as affordable housing and job opportunities. #NoNewYouthJail #BlockTheBunker