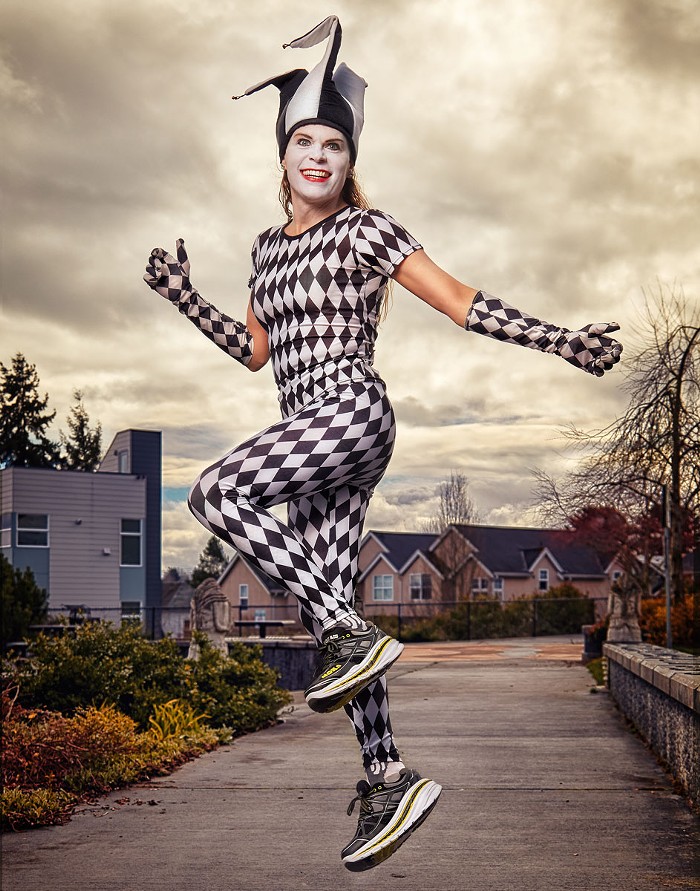 Steve Korn
Ever since the fox and the cock spent all day tricking each other in Chaucer's poem "The Nun's Priest's Tale," Westerners have set aside April 1 for hoaxes and chicanery of all kinds. But almost every day is April Fools' for Capitol Hill's Skipping Jestress, Raven Scott.

Over the last two and a half years, you've likely seen her skipping down Broadway in her black-and-white cap and bells, or maybe dancing with the Asian flute player downtown. You may have thanked her with a smile for brightening your commute, or maybe dismissed her as a day's end fever dream. Or you, like many, many others, may have wanted to shout, "Why?! Why are you doing this?" In an exclusive interview with The Stranger, Scott is here to tell you why.

Nearly every other day, Scott skips from the Safeway on 22nd and Madison to Pike Place Market, then back up Pine to Broadway. She frolics up and down Broadway for a while because "that's the candy part" for her. "I'm warmed up and it's flat. And it's Broadway! And I like that," she says. In good weather and good light, she'll go as far as Seattle Center.

Along the way, she'll dance with street drummers, give Jehovah's Witnesses tips on how to sell their god, and, though she considers herself a feminist, she'll spitball with the guy who holds the "I Need a Fat Bitch" sign. All told, the route ends up including from four to six miles of skipping.

When she's not skipping, she's fixing busted trucks in her capacity as a heavy equipment field service mechanic for the Seattle area. When she works a job site that she frequents on her skipping route, she'll ask the workers if they've ever seen the jester. "The times I've asked people about me when I'm not in costume, they've always said very positive things," she says.

Scott first landed on Capitol Hill in the early 1990s. "I was in awe—all the people with the piercings and the hair and the outfits," she says. She recalls more street theater back then, or at least more people casually wearing costume-style dress. Regardless, she felt as if she had finally escaped the oppression of her conservative upbringing in Vienna, Virginia.

The jester routine morphed out of a shtick she developed when she moved from Seattle to Boise, Idaho. She'd stand on the street in a formal dress and ask passersby to name an old-timey poet. When they did, she'd recite one of their poems.

One evening, she was assaulted. Jumped from behind. Not while she was performing, just while she was being herself. "You might call it a bashing," she says.

The attack sent her into a spiral of social anxiety, and so she hit the bottle. After a while at the bottom, she had what she calls "a wake-up moment." One day, she was thinking of Sylvia Fine's "The Maladjusted Jester," and she thought, "I am a fool. I am a fool!"

So she tossed on an elaborate, corseted party dress and skipped around downtown Boise. As she skipped, she thought: "Laugh at me! Go ahead! Look at me, laugh! Here I am!" And she's been skipping ever since.

Skipping is how Scott expresses joy in a unique way, but it's also "a throwback to the liberal cockiness that once was pervasive on Capitol Hill especially, but that's not especially apparent now with the newer homogenization," she says.

There's something deeper in it for her, too. "I love this city," she says. "What I do makes me feel part of the community, part of the story of the city, and I find great value in that. And I feel as if I bring some value to the city."

While her unique expression of joy brings smiles to the faces of some, it offends the delicate sensibilities of others. She's been assaulted twice since she moved back to Seattle. Who are her assailants? "They wear a uniform," she says. What does it look like? "Conspicuously not gay."

To reduce risk, she avoids skipping during the drinking hours and tries to look people in the eye when she passes them. "It's the same when going by dogs. The black-and-white costume, the skipping—it can be very disturbing for dogs. However, you look a dog in the eye, they're less likely to jump out at you," she says.

In the next year, she's going to roll out the Eidolon Configuration, an art project she describes as "a toy structured with symbols, colors, and geometric patterns that allow some simple ideas regarding the physical conscience and actual world to be put into a relationship."

The object is a gray cube the size of a fist. It's sort of like a Rubik's Cube and a horoscope at the same time. It's an art thing. She's printed up an explainer poster, which she'll put up around town. She hopes people take the time to check it out, but, as she's learned on her skipping route, she doesn't expect most people to look up from their cell phones.