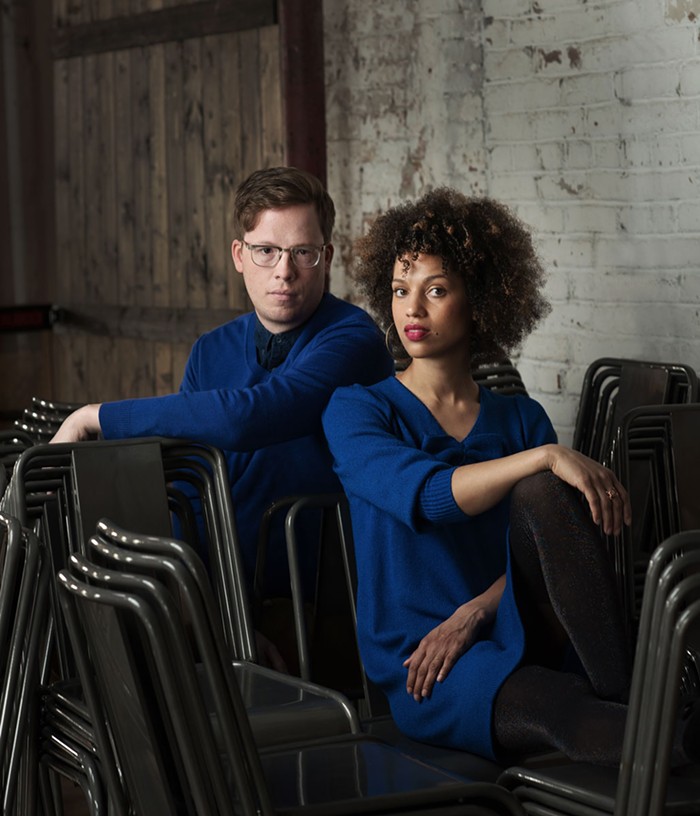 Luke Baumgarten and Ginger Ewing both grew up around Spokane, moved away, and then moved back to the city they loved to start their careers—Ewing was a forensic anthropologist, and Baumgarten is a writer—but they started a community instead.

Together and with others, Baumgarten and Ewing cofounded Terrain in 2008, an arts organization dedicated to keeping talent in Spokane. Over the years, they've thrown yearly art parties in abandoned buildings, created Bazaar, an art marketplace for emerging artists to sell their work, and fueled the economic development of culture and creativity in Spokane. Now Terrain has found a more permanent home in the old Washington Cracker Co. Building. Amid the old brick walls covered with peeling white paint, the couple's creative empire boasts an art gallery, a performance stage, and Fellow, a new coworking space started by Baumgarten.

We sat down to talk about their hopes and dreams for their home city, what's up with Spokane's love/hate relationship with Seattle, and the best things to see and do if you're in town.

How did you two meet?

Luke: I interviewed her when I worked at the Inlander. We were highlighting the most interesting young people in Spokane, so we did a 20 under 40 issue...

Luke: [Laughs] Yeah, you're right, 30. And so I went out and interviewed her for the work she was doing at the museum [Northwest Museum of Arts & Culture].

Ginger: I thought it was going to be a super-meaningful story for our future kids someday, that we met that way. About four months into our relationship, I was like, "How did you and your ex-girlfriend meet?" He said, "Oh, I interviewed her for a story."

Luke: As a journalist, all you do is spend time working, so I met all my friends and everybody I dated when I was working!

Why did you start Terrain?

Ginger: For decades now, Spokane people have told ourselves this narrative that if we're going to be successful in our 20s, we're going to do it in any city but Spokane. And we found ourselves really passionate about Spokane, wanting to have some sort of say on the hemorrhaging of our young and creative people. And despite the brain drain, we saw a lot of really great creativity happening, but in silos—people didn't know each other existed.

Luke: They would say things like "I'm getting too good for Spokane. I need to go find my community elsewhere," like there was no possibility that a community could be created here. And so we just needed to bring them together and make them realize it's worth being here.

Ginger: I think that we sorely underestimated how thirsty Spokane was for something like that. We were about an hour and a half into our very first event, and it was clear that we had tapped into something much bigger and more profound than we even realized.

Luke: We thought we might get a hundred people, and we had 1,500 show up that night.

Ginger: And going beyond numbers, you could watch people falling in love with their city right before your eyes, and there is just this pure excitement like "Yes, I finally found my people!"

Luke: The highest praise we would get from people in those early years was: "Wow, this seems like an event that could happen in Seattle or Portland." And the more that happened, the more we realized that actually this could not happen in Seattle or Portland—it's something that's unique to Spokane. You can have huge art events everywhere. In Seattle, it takes Paul Allen money. Here, we can do it as these boot-strappy twentysomethings with help from the mayor's office, and we can still get 8,000 people into an awesome old warehouse.

How would you describe Spokane's... ambivalent attitude toward Seattle?

Ginger: I had really mixed feelings about coming to this interview, and I feel like it stems from decades of Seattleites disregarding anything that happens east of the I-5 corridor. So I have—had—this deep suspicion about The Stranger's motives for wanting to do a piece about Spokane, period, and why now? I think for many years the narrative of if we're going to do something, you had to do it anywhere else but here, a lot of that narrative came from the west side. And we are finally at a point where I don't even like to mention Portland and Seattle anymore, because we're not Portland and Seattle—and that's a really fucking good thing.

Where do you see Spokane in 10 years?

Ginger: We're also at a point where we're learning from bigger cities how to create infrastructure now, so that our culture creators don't get pushed out in 10 years.

Luke: I don't worry about that here as much as in places like Boise and Tacoma with closer proximity to places like Salt Lake City or Seattle. We're built sort of cheek-to-jowl in an interesting way, where there aren't any pockets of wealth that are so big that you can spend your whole life in them and not see the rest of Spokane and vice versa. And there is no place in Spokane that's so poor that you can't walk a little ways to see something that you might be able to aspire to.

A Seattleite has 24 hours to visit Spokane. What's on their must-see-and-do list?

Luke: The parks, especially downtown, Riverfront Park and Huntington Park and Manito Park. I think you've got to catch a show at the Bartlett. Richmond Art Collective is cool, and the Laboratory, an interactive arts space and residency, and Saranac Art Projects.

Ginger: You need to go shop at Fringe & Fray. You need to eat or have a cocktail at Ruins. Santé, Garageland, the Wandering Table, Hogwash. Go to Barrister and have a glass of wine. We also have a lot of great junking stores, so Boulevard Mercantile and Tossed and Found are two really good ones. Go and eat at Chaps, a fun little breakfast joint. Oh, and Italia Trattoria—best brunch in town.

If you could fix one thing about Spokane with a magic wand, what would it be?

Ginger: This might be a slightly biased answer, just because it's the work that I do, but if we can get our city leaders to value and invest even more in our culture creators, I would do that in a heartbeat.

Luke: I would wave a magic wand and make us believe in ourselves a little bit more. And dream a little bigger than we traditionally have.