Person of Interest: Kellie Newton, Who Resists by Listening 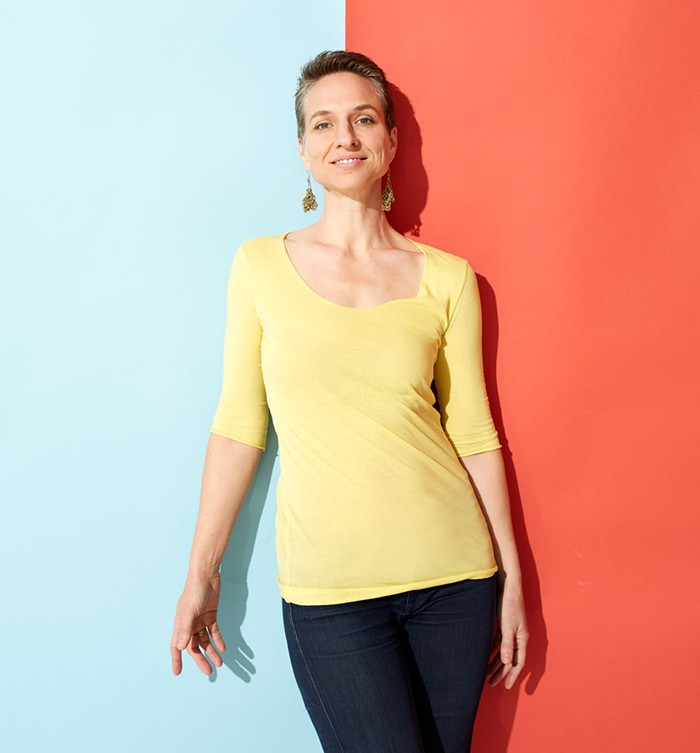 Like any American worth their "I voted" sticker, massage therapist Kellie Newton was appalled by the election results last November. She was also pissed. But when her childhood friend Heidi Petak, now an evangelical Christian living in Nashville, wrote a blog post explaining her vote for Trump, Newton decided to engage. Their initial dialogue took place on Facebook, but soon the two started video-chatting about the election and their beliefs using the principles of "compassionate listening," and they posted the conversations on YouTube.

It didn't end there. Newton went to Nashville over inauguration weekend, and the two old friends ended up leading a workshop there, as well as speaking to a couple of high-school classes. Since then, Petak has visited Seattle with two of her conservative Christian friends, and the group spoke at Shoreline High, led a workshop, and sat on a panel at Town Hall. They now call their work the Heart Perception Project. "Ultimately, it's about encouraging people to really examine why they resist engagement with the other side," Newton says. "We look at how their interactions tend to break down when they do engage, and give people insights on how to engage in a way that fosters more connection, understanding, and peace."

Is this an act of resistance?

I am resisting the end result of not engaging with the other side—a strategy that seems rampant today. We've gotten so good at saying "No!" to each other in so many ways. So my act of resistance is saying, "Yes. Tell me more." We—both sides—either shun each other, shame each other, or try to change each other. The long-term effect of that is what we're experiencing now: a country that no longer knows itself. We have become deeply alienated from our fellow citizens. This is my act of resistance to going down that path any further.

You are working with an evangelical Trump supporter on this. What is that like? Can you find common ground with someone who thinks the world was made in six days?

I love this question because it really gets at the assumptions we make about people when we put them into such a limited box. It's been amazing. I've had to work hard to consciously choose curiosity instead of reactivity at times, but how do I relate with Heidi, a Trump voter and evangelical Christian? The same way I do with any of my liberal friends: through shared passions and hopes and fears and all of that messy stuff that comes with being human. The good news is that she's not an asshole and neither am I, so it's not hard to relate when we both understand it's not our job to try to change the other person. We try to see that we're both doing the best job we know how to create the life we want. Now I think I have more problems with her taste in wine than I do with her religious beliefs, but some things just can't be helped.

How has this experience been for you?

It's been both amazing and fucking hard. I basically chose a path that was perfectly designed to push all my buttons, burst my comfort zone, and challenge many of my preconceptions and biases. I love the current conversations about unconscious racism present in white America, because it's spurring this needed dialogue about the biases we hold yet don't necessarily cop to. And we all have them. Certainly in regards to racism, it's particularly insidious, but it's also subtly present in so many other arenas. I've learned a lot about my own intolerances, my apathy, my assumptions, my gaps in understanding, and my arrogance. It's been an uncomfortable process, and yet the more I lean into it, the more openhearted and curious I feel about people around me that I'd roundly dismissed in the past.

Have any minds been changed in this process?

Another question I love because it really speaks to what people's agendas usually are when engaging with someone from the other side: to change them. I really had to let go of that agenda to do this work. We all can sniff out when someone engages with us with an intent to change us. When someone does that with me, my walls go up and I'm out. So I actively work to disengage that agenda—with varying degrees of success—when I talk to conservatives. What I will say is that connection makes people think twice about dehumanizing each other on both sides. I hosted a dinner for Heidi and her friends where I invited friends of mine who represented a few of the swaths of liberal America that conservatives resist. I invited a gay married couple, a mother of a transgender daughter, and a staunch environmentalist couple. The evening allowed everyone to deeply share and to ask questions of each other. It was rich and heart-centered, and not without moments of tension. In the end, Heidi looked at the gay couple and my friend with the transgender daughter and said, "I commit to you that I will say something if I hear someone saying something hateful about gays or trans people."

You're also a massage therapist. Do you have more clients talking about political anxiety right now?

Less so now than directly after the election, when I acted as a pseudo head therapist because people just needed to process their fear. Their bodies and nervous systems were on high alert, and I spent a lot of time talking people down from the fear cliff. I did lose one client who decided after the election to use her monthly massage budget for activism instead. I can't fault her for that.

I had this reflex where I instantly turned off the car stereo when NPR aired a Trump clip because it created such a visceral response in me to hear him talk—and now I'm actively trying to change that. In our workshops, we talk about neuro-pathways that take us down a reactive, limbic-system response, versus a measured, pragmatic response. As I'm not willing to let my reactivity govern me anymore, I'm actively working to practice choice in how I respond. And If I'm trying to better understand people who voted for Trump, I have to actually start listening to him too.

When I flew to Nashville, I happened to be walking to my gate right as the swearing in was happening. I passed a group of people huddled around a TV watching with rapt faces as Trump became president. My initial response was one of inward recoil—which I then consciously redirected into an awareness that these people were likely experiencing joy and hope and that I could relate to how lovely it feels when I experience that too. When I focused on being happy for them for getting to experience joy and hope, I felt a lot better than when I was judging them for being "wrong."

Also, I've been dabbling in what's known in Buddhist circles as a "loving kindness meditation," where I'm sending Trump and the others in his administration goodwill and hopes that they experience deep love and happiness. Do I think it makes a difference as far as Trump and company go? Not likely, but I feel much better after doing it than when I aim a shit sandwich of hate and fear their way.

If you had a magic wand and could fix anything about Seattle, what would it be?

I love Seattle, but I would love for us to get our act together in terms of how we allocate money so that we can actually do something effective in terms of traffic mitigation, homelessness solutions, school funding, and affordable housing. We have so much money in this region—and we keep taxing ourselves more to try to fund important causes—but we just don't seem to know how to spend it effectively. And OH. MY. GOD. I love what the rain does for our regional beauty, but I'm so over it right now.

Guest Editorial: An Open Letter to My Mother, Who Voted for Trump