Person of Interest: Lacey Leavitt Is a Virtual Reality Producer and Former Rollergirl 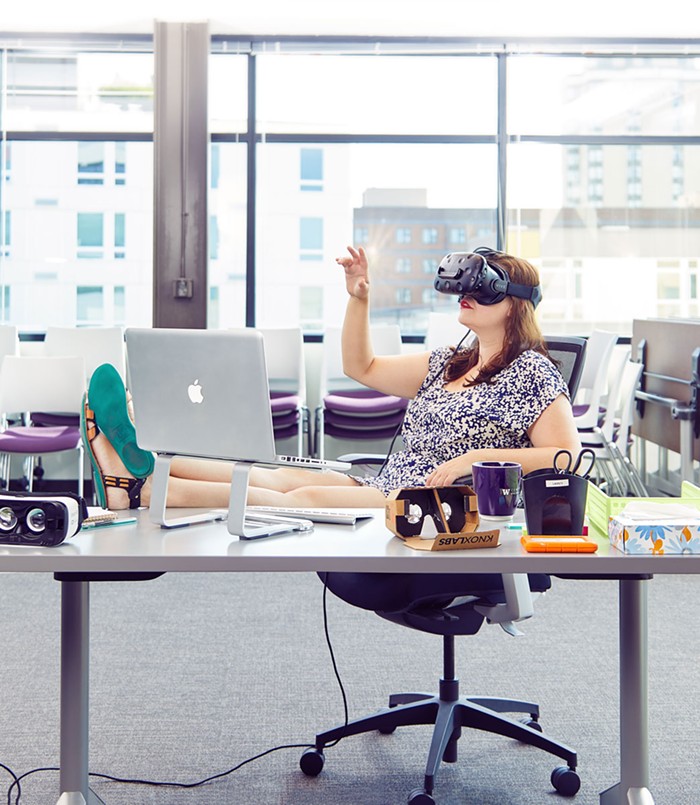 You've been a film producer for years, but lately you've been working in a new medium—virtual reality. What's fun about telling stories over VR as opposed to traditional film?

It's a really exciting time to be a storyteller. VR is truly the birth of a new medium—not quite traditional film and not quite video games, it's a whole new thing. Our traditional film tools don't work in this space—controlling the mise-en-scène through close-ups, wide shots, etc. So there's a lot of discovery right now, and few hard and fast rules. It's a very creatively simulating time to be working in the space.

Where do see VR going? And why do you think is Seattle a great place for VR right now?

I think VR is going to really take off in the next three to five years. Right now the hardware is all still a little too clunky and the content is still in its infancy, but because you have companies making huge investments in improving the software—and technology gets faster and smaller every year—I know that will all change soon. Seattle is an incredibly exciting place to be for VR's infancy because we have such an amazingly rich artist base as well as a strong tech base. I truly believe we could be the epicenter of creative VR content, and I hope we can mobilize the community and infrastructure to make it happen.

I did! I fell in love with derby while filming Blood on the Flat Track, a documentary that followed the Rat City Rollergirls for their first two seasons. I love the team camaraderie and how intense the workout is—and it turns out that hitting people is a really great stress reliever (though it's important to do it safely, of course!). I joined the league after I finished my documentary, but I was too busy with filmmaking to be able to keep up the practice requirements. My derby name was Rambo Connection, which represents my deep love of both Kermit the Frog and 1980s action heroes. My derby wife was Jean Claude Van Damsel, and we were/are perfectly matched nerds for each other.

What neighborhood do you live in? What do you love or hate about it?

I'm a Ballardite. I love the close proximity to the water, Hattie's Hat, Sunset Tavern, the Tractor, Hotel Albatross. I hate how expensive it's getting, that so much of the new development is super ugly (I get we should be denser but it doesn't have to be horrifyingly bland), that traffic/transportation to and from the area is such a pain, and that Zayda Buddy's is gone. RIP, Zayda Buddy's.

If it's afternoon, that means it's at peak temperature, which means I'm in the shade because I'm a Washingtonian. But if it's getting to sunset, I love Sunset Hill Park, Golden Gardens, or Gas Works Park via the Burke-Gilman Trail.

You're the CEO of Electric Dream Factory, a VR and film content studio. What is your advice for emerging women leaders in creative and tech industries?

We all know that both the film and tech industries have pretty dismal numbers when it comes to supporting women and people of color, but the fact that there's such a conversation about it has definitely been bringing about some change.

We need more diversity in VR, film, and tech because all of these industries have a lot of influence on shaping our culture. My advice is to just dive in and do the best work possible, seek mentors and advice from people who have already been blazing the trail, and work to lift others up alongside you.

Comments 1
Tags: Person of Interest
The Stranger depends on your continuing support to provide articles like this one. In return, we pledge our ongoing commitment to truthful, progressive journalism and serving our community. So if you’re able, please consider a small recurring contribution. Thank you—you are appreciated!
CONTRIBUTE NOW