Person of Interest: Lisa Petrucci Is Keeping Something Weird in Seattle 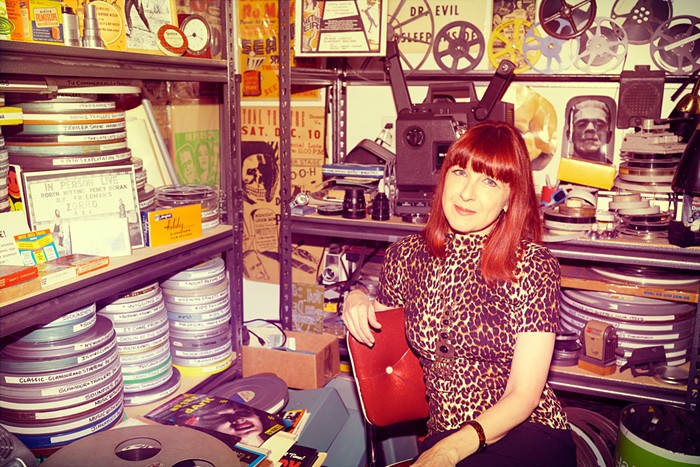 What is Something Weird?

My late husband, the great Mike Vraney, started Something Weird Video in 1989. He used to rent and sell psychotronic videos out of Bop Street Records back in those days. He rescued unwanted and forgotten films from being tossed in the landfill, released them on home video, and inadvertently became a film preservationist. I came on board in 1994. Something Weird eventually became known as one of the most eclectic, unusual, and beloved mail order video companies out there. We've adapted to keep up with technology. Since Mike's death, my primary mission has been to honor and maintain his legacy and keep Something Weird going strong.


Of all the kinds of "weird" videos and films in the whole collection, do you have any favorites?

I'm very fond of 1960s sexploitation cinema, especially the black-and-white "roughies" and films of Doris Wishman, Joe Sarno, and Michael and Roberta Findlay. Also, the kooky regional "nudies" by filmmakers like Dale Berry. Some of my faves are Hot Thrills and Warm Chills, Hot Blooded Woman, The Touch of Her Flesh, Bad Girls Go to Hell, Sin in the Suburbs, and Shanty Tramp. These films are so idiosyncratic and sleazy.

There are also hundreds of mind-numbing shorts and vintage educational films that Something Weird has put out on its numerous compilation series. They're basically video time capsules of some of the most rare and obscure subjects ever captured on celluloid. An endless barrage of bizarre sights and sounds.


Is there anything in the collection that's just "too weird" for you?


And you're quite the collector yourself...

I have a strong attraction to artifacts from a certain period of time and retro mid-century trends. I gravitate to dolls, toys, and collectibles from my childhood in the 1960s. Beside dirty men's magazines, paperbacks, and old comic books, I hoard monster kid and spook show ephemera. I adore big-eyed art like Keane and Gig and I'm a tiki enthusiast too. Did I mention I also like circus and carnival memorabilia? Ha!


What neighborhood do you live in? What do you love (or hate) about it?

I live in Lake Forest Park. It's the best of both worlds, just close enough to Seattle to zip in and out of town easily and still get to have my own little piece of heaven tucked away in the woods not far from civilization. My only complaint is that there's not enough good places to eat in the North End!

Your Complete Guide to September 2019 Events in Seattle

The 175 Biggest Arts, Music, Food & Culture Events to Know About

The Cage Fighter: Deciding Between Family and Kicking the Shit Out of People

Slopes Are for Suckers, Snowshoeing Is for Stoners

Getting high and snowshoeing is great. Just don't wander onto someone else's property.