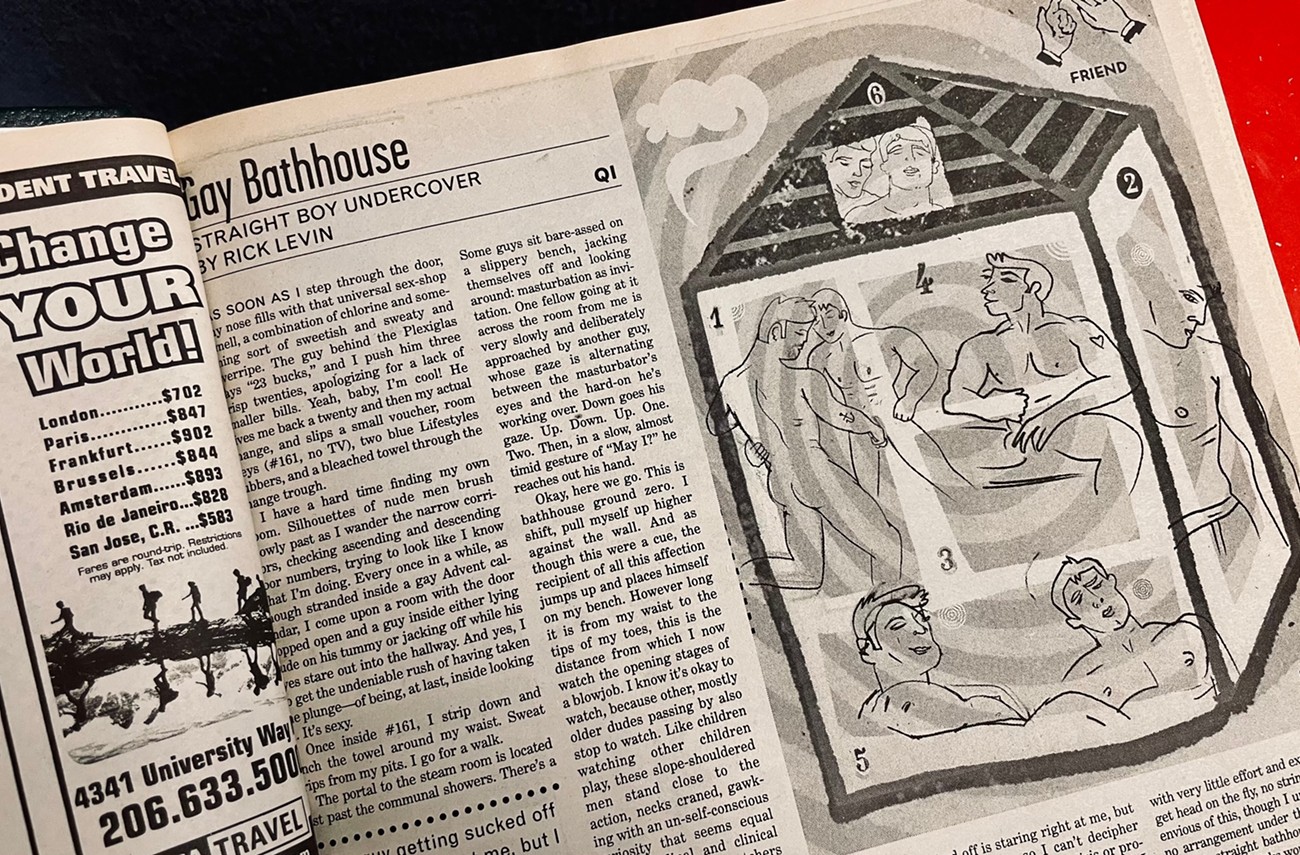 As originally printed, 6-21-01, Illustration MICHAEL WERTZ
As soon as I step through the door, my nose fills with that universal sex-shop smell, a combination of chlorine and something sort of sweetish and sweaty and overripe. The guy behind the Plexiglas says "23 bucks," and I push him three crisp twenties, apologizing for a lack of smaller bills. Yeah, baby, I'm cool! He gives me back a twenty and then my actual change, and slips a small voucher, room keys (#161, no TV), two blue Lifestyles rubbers, and a bleached towel through the change trough.

I have a hard time finding my own room. Silhouettes of nude men brush slowly past as I wander the narrow corridors, checking ascending and descending door numbers, trying to look like I know what I'm doing. Every once in a while, as though stranded inside a gay Advent calendar, I come upon a room with the door popped open and a guy inside either lying nude on his tummy or jacking off while his eyes stare out into the hallway. And yes, I do get the undeniable rush of having taken the plunge--of being, at last, inside looking in. It's sexy.

Once inside #161, I strip down and cinch the towel around my waist. Sweat drips from my pits. I go for a walk.

The portal to the steam room is located just past the communal showers. There's a lone Asian guy, very buff, showering to my left as I walk by. Inside, the path immediately forks. I opt right, realizing at once that the whole interior of the sauna is split in half and duplicated like a double-helix model of a DNA strand. At a point right before the maze terminates in a cluster of individual shower stalls, I pull myself up to a high bench and lie back, my head against the wall, attempting to look cool and unassuming and vaguely sexy. It's hard to see people's faces until they get right in front of me. Everything is an outline, a sketch of masculinity: pecs, legs, hair, pecker.

Okay, here we go. This is bathhouse ground zero. I shift, pull myself up higher against the wall. And as though this were a cue, the recipient of all this affection jumps up and places himself on my bench. However long it is from my waist to the tips of my toes, this is the distance from which I now watch the opening stages of a blowjob. I know it's okay to watch, because other, mostly older dudes passing by also stop to watch. Like children watching other children play, these slope-shouldered men stand close to the action, necks craned, gawking with an un-self-conscious curiosity that seems equal parts libidinal and clinical and envious. The watchers touch themselves. I think of spider monkeys on National Geographic nature specials. I wonder if I have someone's spooge on the bottoms of my feet.

And yes, I am indeed aroused by this extremely intense and immediate and perspiring combination of anonymity and intimacy, and I shift my ass once again, only to realize that I'm now striking a kind of Sharon Stone à la Basic Instinct pose, which feels absurdly coy, so my legs slap back down upon the bench, and, presto, I'm tenting a bit, and the guy getting sucked off is staring right at me, but I can't see his face, so I can't decipher what's there, detachment or crisis or projection or pleasure or amusement. I figure he's shot his wad, because now these two strangers uncouple and disperse, one to the shower, the other in the opposite direction. That's it. There is no kiss, and no tell.

Walking back to my room, I consider how deeply reassuring it must be for gay men to know that, at any time of day or night, and with very little effort and expense, they can get head on the fly, no strings attached. I'm envious of this, though I understand there's no arrangement under the sun that would make a straight bathhouse work. A whole different set of risks would arise, and they'd be beyond management. Men are dogs. Put 'em in a kennel, and you get pretty much what you'd expect.

Rick Levin is a heterosexual who lives in West Seattle.

Comments 4
Tags: Pullout The Queer Issue Homo Queer
The Stranger depends on your continuing support to provide articles like this one. In return, we pledge our ongoing commitment to truthful, progressive journalism and serving our community. So if you’re able, please consider a small recurring contribution. Thank you—you are appreciated!
CONTRIBUTE NOW