So You've Decided to Sleep with a Black Man 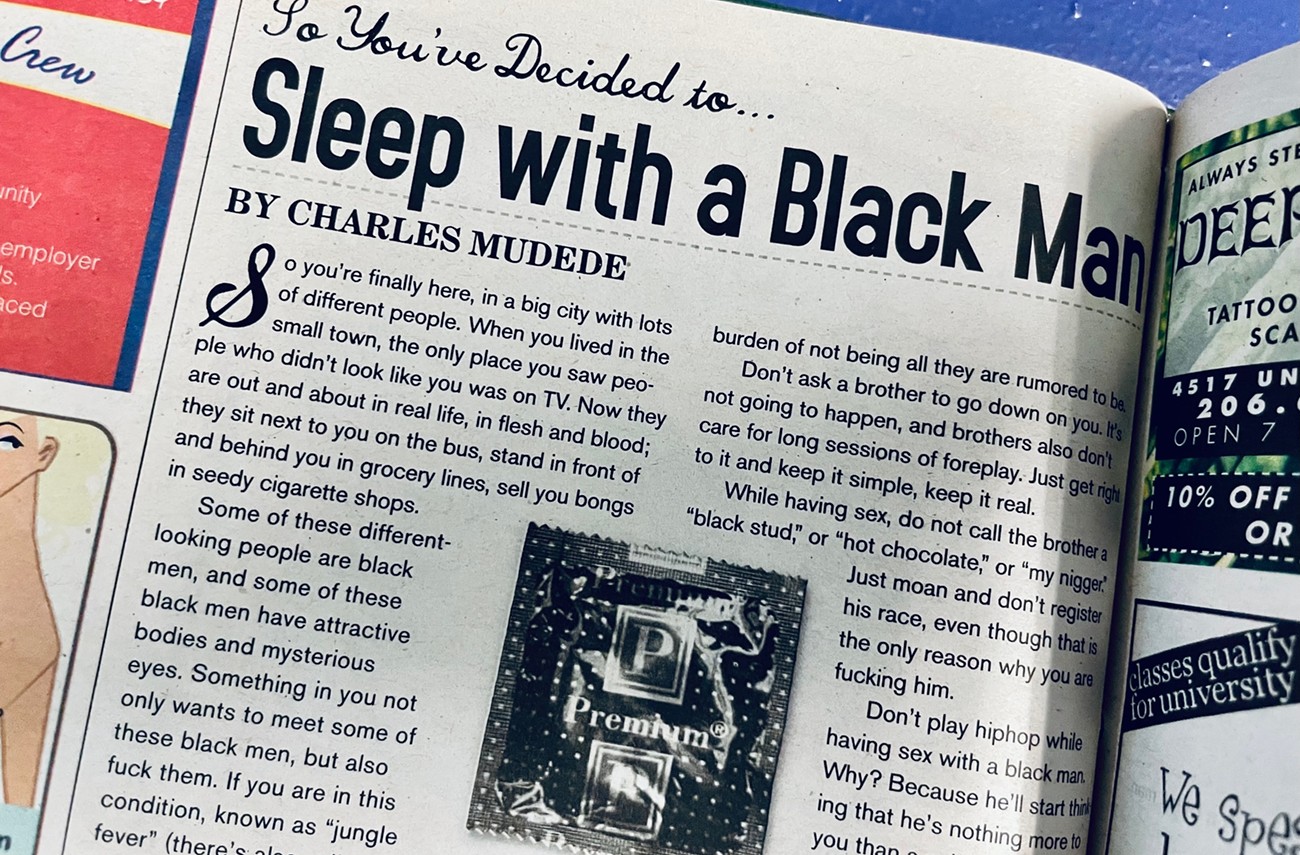 So you're finally here, in a big city with lots of different people. When you lived in the small town, the only place you saw people who didn't look like you was on TV. Now they are out and about in real life, in flesh and blood; they sit next to you on the bus, stand in front of and behind you in grocery lines, sell you bongs in seedy cigarette shops.

Some of these different-looking people are black men, and some of these black men have attractive bodies and mysterious eyes. Something in you not only wants to meet some of these black men, but also fuck them. If you are in this condition, known as "jungle fever" (there's also yellow fever, but that's another matter altogether), then here are a few important things you should know about having sex with a black man.

First and foremost, when the black man you are about to get it on with pulls down his pants and reveals a shockingly small penis, try your very best not to look upset or surprised or confused. Look pleased or supportive or, best of all, like you didn't even notice a thing. Black men with small penises have the hardest time in this society. Like a hunchback is aware of his physical flaw, the black man with a small penis is aware of the fact that he is a walking, breathing disappointment, the living negation of an enormous sexual myth. Even normal-looking, and normal-performing, brothers feel the guilt and burden of not being all they are rumored to be.

Don't ask a brother to go down on you. It's not going to happen, and brothers also don't care for long sessions of foreplay. Just get right to it and keep it simple, keep it real.

While having sex, do not call the brother a "black stud," or "hot chocolate," or "my nigger." Just moan and don't register his race, even though that is the only reason why you are fucking him.

Don't play hiphop while having sex with a black man. Why? Because he'll start thinking that he's nothing more to you than a substitute for some fantasy rapper you've seen on BET—50 Cent, Nelly, LL Cool J.

The music of Barry White, however, is cool.

Missy Elliott, your favorite sister rapper on BET, has warned you about "two-minute brothers." Well, you don't even know the half of it. There are one-minute brothers out there, and you just might end up with one. If that happens, sorry, so sorry. There's nothing anybody can do about that.

After sex, don't look puzzled or lost in thought. The brother will think you are disappointed with the whole affair.