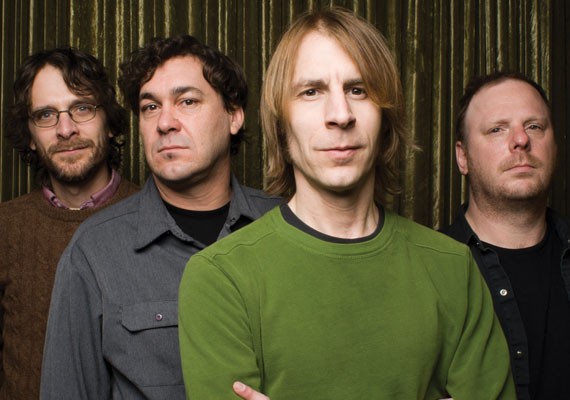 Order a Mudhoney record from Sub Pop, and odds are Mark Arm shipped it to you himself. Shawn Brackbill

Seeing Mudhoney frontman Mark Arm pulling records from shelves in Sub Pop's warehouse is akin to finding Iggy Pop at the Jiffy Lube. Really? Arm—one of the catalysts of gr*ng*—has to work a day job? He can't live off the royalties from "Touch Me I'm Sick"? What kind of world is this?

On record and onstage, Arm sounds like one of the most dissatisfied, cantankerous characters ever to expectorate onto a microphone. But gliding around this warehouse and leaning against this table before a Flatron computer (wait, dude doesn't even have his own chair?!), processing orders from music retailers worldwide, he exudes a calm, comfortable acceptance of his role in the universe. Dressed in a forest-green T-shirt emblazoned with no band logos or any design whatsoever and wearing black jeans and sneakers, Sub Pop's warehouse manager looks at least 15 years younger than his actual 50. He has all of his hair, which still hangs lankly, longly, and blondly from his noggin.

If you get near Arm, you'll notice he has the most intense eyes; you feel like if you touched his brow, the radiation from his disdain could incinerate you. But he also possesses one of the broadest smiles I've ever seen and frequently laughs like a champ.

Arm is a guitar-thrashing, larynx-shredding icon of Seattle music, so people probably have grandiose ideas about what his life is like. Maybe this article is a demystification.

"You're going to blow it for all of these people..." Arm warns, printing out another invoice from another record shop on a recent Monday morning.

Ensconced at Sub Pop now, Mudhoney's wildest member typically arrives at headquarters about 9:30 a.m. and leaves around 5:30 p.m. "First thing I do is check e-mail," Arm says, chuckling. "If there are orders, like these [points to invoices on his desk], I pick 'em and fulfill 'em and send 'em out."

To achieve this, Arm wheels a large yellow plastic bin on a gurney and then pulls LPs and CDs from the many shelves in Sub Pop's vast warehouse. Today, orders are pouring in for the new King Tuff LP, Postal Service's Give Up (still!), Fleet Foxes' Helplessness Blues, Nirvana's Bleach (still!), Band of Horses' Cease to Begin (huh?), and Mudhoney's 1988 debut EP, Superfuzz Bigmuff (the most popular Mudhoney release, along with the "Touch Me I'm Sick" 7-inch).

After Arm removes his haul from the bin, he scatters packing peanuts in a box before placing the merchandise in a box with the care of a mother putting her offspring in a crib. He then tosses more packing peanuts over the merch like a chef sprinkling spices into a pot. His technique is impeccable. Finally, he grabs a tape gun and seals the box with a few noisy flourishes and then applies the UPS address sticker. Another Sub Pop package is ready to ship to another satisfied customer.

"I mostly send stuff to international distributors and to record stores that have direct accounts with us," Arm says. "Cassidy [Gonzales] over here does mail order. He also fills in for me when I'm gone. He actually knows more about how the warehouse runs than I do because he knows all these different jobs, whereas I only know one."

So how's business? We hear so many stories about the music industry being on its deathbed.

"It's good," Arm says. "It took a big hit in 2008. There were stores that looked like they might not survive, like Amoeba's stores in San Francisco and LA. They were huge accounts, and they would always get enormous amounts of stuff. And all of a sudden, they were barely ordering anything. Then they changed their terms on how they paid for things. But they're back up to their previous standards at this point, so that's encouraging.

"What's weird is there are stores like CD Alley that now mostly order vinyl. That's been a major shift over the last several years."

As warehouse manager, Arm must keep Sub Pop and subsidiary label Hardly Art's huge catalog organized. "It's kind of messy, but there is a method to where everything is placed. I keep stock on hand, or try to, so we always have enough. Some things, when they're brand-new and hot, we run out of. It's usually an issue with manufacturing. We've run out of the Beach House record [Bloom] for the second time since it's come out. The jackets are a difficult job—they glow in the dark or something—so it takes a little while for them to get made."

That Arm wears a Sport Aid bandage indicates that Sub Pop is thriving. Pulling records and taping boxes ain't no joke. "I'm going to see a physical therapist tomorrow. It's from repetitive motion—I assume from [warehouse work], since it bugs me more here than it does when I'm playing guitar. It doesn't bug me at all when I'm playing guitar. We have insurance. Sub Pop takes really good care of its employees."

This job consumes a lot of time, and it's been four years since the last Mudhoney album (The Lucky Ones). It takes longer now to create albums because everybody has other responsibilities. Bassist Guy Maddison, for example, is a stat nurse at Harborview, and guitarist Steve Turner lives in Portland, where he deals records, so Mudhoney don't practice much.

"We just got back from Australia," Arm says, "so we're probably not gonna practice till next week. We have a bunch of shit to do, because we have Bumbershoot coming up and then right after that we're going into the studio for three days. We have a couple of new songs that we haven't worked on."

Despite the long gap between releases, Sub Pop hasn't pressured the band to make another album. "But there's pressure from us, because it's been fucking too long," Arm says, laughing. "We've put down tons and tons of riffs over the last two years. The main sticking point is me coming up with lyrics I'm happy with. The other one is getting together to work on our ideas—but that's kind of the easy part once Steve gets into town."

It seems like by now, Arm should be relaxing in a mansion, watching rare krautrock videos on a 72-by-48-inch screen. But here he is, schlepping lesser mortals' records. Maybe I have a misguided idea of Mudhoney's place in the music business. "We're kind of outside of the business at this point. It was weird when we were in a situation where we could live off of music. We came from early '80s American hardcore. The idea that you make money off of this shit was hard to imagine. You were stoked if you made $100 for a show—if you didn't lose all the money you'd just sunk into renting the hall."

Come on, Mark. Do you really have to work a day job? "Oh yeah. I might not have to if we toured more, but that's an impossibility with people's families. At this point, I don't really want to be gone for half a year. I like hanging out with my wife and dogs and going surfing when I can. I'm not a great surfer, so I'm not looking for the killer, insane waves. I'm looking for waves I can ride. I started surfing five or six years ago. Falling while skateboarding hurts too much at my age."

Huh. Mark Arm surfs. But he still doesn't have his own chair.