Operators Are Standing By to Take Your Call! 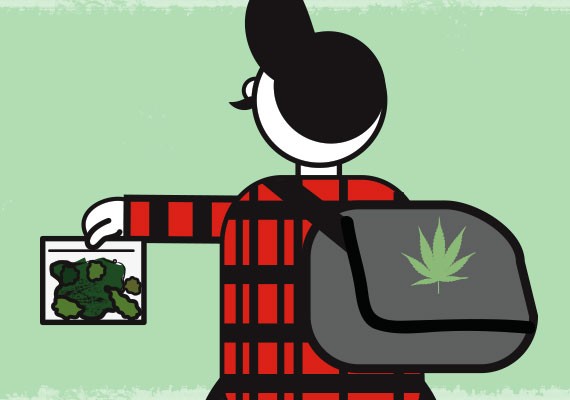 Seventeen months ago, voters in Washington State chose to legalize marijuana, the same time as Colorado. But while pot stores opened in Denver on January 1 of this year, Seattle still has zero stores. Why don't we have stores yet? Between the complicated language of Initiative 502 and the persnickety Washington State Liquor Control Board, which is tasked with issuing licenses for legal pot businesses, the retail pot stores we voted for are tangled in red tape and bureaucratic delays—with no end in sight.

It's like our entire state is on stoner time.

So what's a pothead to do? Lots of folks call one of the two aboveboard businesses in Seattle that will deliver pot in about an hour: Club Raccoons and Winterlife Cooperative. And no, you don't have to be a medical marijuana patient, just 21 or older.

When I've ordered, the dispatcher was cordial, the delivery person checked my ID, and for about $80 per quarter ounce, the prices rivaled your typical dealer. The best part is that you don't have to go see a dealer—or go anywhere. The pot comes to you, just like the pizza you order after that pot gives you the munchies.

Club Raccoons delivers in the central city (including downtown, Capitol Hill, and the Central District). "You'd think the customers are hipster kids on the hill, but it's moms, dads—it's everybody," says a co-owner who goes by the code name Germ. At Winterlife, they go by cuddly code names like Bear, Possum, and Otter.

These code names bring us to an important point.

No, these delivery businesses don't appear to comport with the state's legalization law (which requires a retail license, which doesn't yet exist). But after a year in operation, Germ says, "There has been zero shade from police."

"There is a certainly a degree of risk for us, and we are willing to take that risk," says Germ. "But right now, the winds favor us. Until the people with the guns and jails decide that we are worth a fight, we will do what voters wanted people to do, which is provide cannabis to people."

In contrast, customers ordering pot appear to be squarely within the law. "There is no crime defined for purchasing or obtaining marijuana," Alison Holcomb, the primary author of the initiative that legalized marijuana, said earlier this year. State law prohibits growing and selling pot without a license, but having up to an ounce of pot is not prohibited, and how a person obtains that ounce "is irrelevant," Holcomb says. "There is absolutely no penalty for purchase."

On the other hand, Holcomb believes, "The person delivering that marijuana is guilty of a felony."

Liquor control board spokesman Brian Smith says they don't have jurisdiction over people who don't have a license, but local police could take action.

"Probably not," Seattle Police Department spokesman Sergeant Sean Whitcomb told The Stranger in January. Pot delivery service is not a priority, he said, particularly because Washington is in a window between passing the legalization law and licensing businesses.

Which is why companies like Club Raccoons and Winterlife Cooperative make sense: They provide a practical stopgap service while the state gets its act together.

Comments 17
Tags: Pullout Northwest Marijuana Guide Spring 2014 Weed
The Stranger depends on your continuing support to provide articles like this one. In return, we pledge our ongoing commitment to truthful, progressive journalism and serving our community. So if you’re able, please consider a small recurring contribution. Thank you—you are appreciated!
CONTRIBUTE NOW