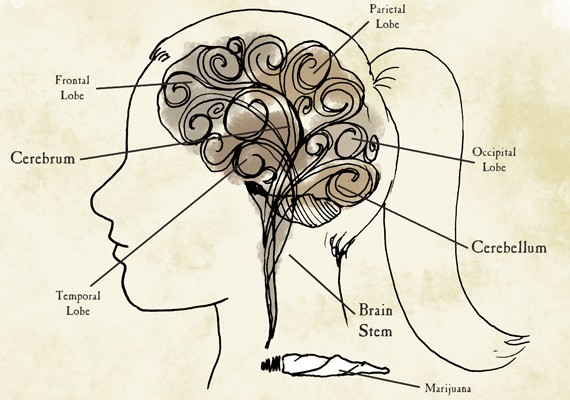 The verdict is still out, but scientific evidence points toward yes. The more weed that teens consume at a younger age, the more problems they tend to have later in life.

Why? Probably because the brain is still forming during teenage and young-adult years. The tissue itself is still developing connections between brain regions and producing the cells that process information. Neurodevelopment is particularly active during childhood and adolescence and continues until at least age 25. Heavy use of weed during that time has been linked to permanent problems with memory, learning, perception, impulse control, and more. But it's important to know that cause and effect when it comes to cannabis are still an open question. Marijuana could make teens dumber, or dumber teens could be more likely to want to smoke a lot of pot.

What Kind of Research Has Been Done?

Researchers at Duke University recently concluded a study of more than 1,000 people from the time they were born until they reached the age of 38. Studies were performed periodically throughout their lives, and were carefully controlled to ensure test subjects did not have any other drug or alcohol addictions or psychological disorders, and were not high at the time of the test. They found that those who used pot more than once weekly before age 18 displayed more severely impaired intelligence, slower reaction times, shorter attention spans, and poorer listening skills than those who began using marijuana after age 18.

Other groups of scientists have studied the brains of teenagers, too. Compared to those who never used pot, the tissue in the brains of young pot users has been shown to exhibit structural changes. Specifically, the white matter (the cells in our brains that connect different areas) is more porous in subjects that began regularly using pot at a young age, a physical state associated with slower mental processing. Gray matter (the cells in the brain responsible for processing information) showed changes in shape and size, alterations that are associated with executive dysfunction, mood issues, and poor memory. In addition, the brains of teenagers who are heavy pot users have lower blood flow, develop abnormal neuron connections, and show inefficient brain activation patterns. All of these physical features are associated with poor memory, attention, impulse control, organization, and time management.

The Connection Between Weed Use and Mental Illness

Teenagers who use weed daily have increased rates of depression, anxiety, and psychosis later in life. (Psychosis means someone has lost connection with reality—i.e., they see and/or hear things that don't exist.) Scientists cannot conclude whether heavy weed use causes psychosis among people who otherwise wouldn't develop symptoms, or whether people who are predisposed to being psychotic tend to seek out weed to help them deal with the world, but whatever the case, psychosis and heavy pot use in adolescence are linked.

No. Again, causation has not been determined in these marijuana studies. Instead, studies to date merely observe a connection between marijuana use and brain function. However, it is true that a very clear relationship between teenage pot use and decreased cognitive function and mental health is demonstrated across the scientific community.

If Weed Is Bad for Teens, Why Does It Feel Good?

For the same reason weed makes adults feel good: It releases dopamine into the brain. When you get high, dopamine signals tell your neurons that it feels good and you should do it again. Dopamine does the same thing when you have sex, listen to music, or eat junk food. Dopamine is part of the pleasure/reward system in the brain, which is actively developing until adulthood; messing with it during adolescence can cause damage. Decreased dopamine signals in teenage pot smokers' brains have been observed after prolonged use, meaning getting high becomes more difficult. In other words, the more weed a teen smokes now, the less happy weed will make him or her over time. This can make teenagers who use heavily more prone to depression, anxiety, and addiction.

So What About Adult Weed Users?

After the brain has finished developing, it is much less vulnerable. Toking up at a young age may have a different effect on your brain than toking up as an adult. The law that legalized weed in Washington State specifically prohibits teenagers from smoking it; it is only legal for people over 21, just like alcohol. Unlike a lot of other laws related to drug policy, this one actually makes sense.

Comments 25
Tags: Pullout Green Guide Fall 2014 Weed
The Stranger depends on your continuing support to provide articles like this one. In return, we pledge our ongoing commitment to truthful, progressive journalism and serving our community. So if you’re able, please consider a small recurring contribution. Thank you—you are appreciated!
CONTRIBUTE NOW