Listen, It's Not as Bad as You Think 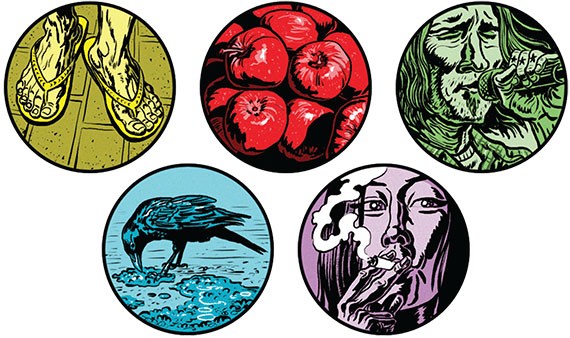 Hellooooo, Californians! Welcome to Seattle. Congratulations on getting a job at Amazon/Microsoft/Nordstrom/Starbucks. You are now free to take 20-minute showers and buy mountains of legal weed.

If you're shocked by my friendly tone, it's because I, too, am a Californian. Perhaps you've noticed that our presence is causing some anxiety in the Emerald City, what with the hellish traffic and rising rents and influx of woo girls. When I first moved here from Oakland, last July, the guy at the department of licensing (i.e., the DMV) looked at my California driver's license and groaned loudly, "OH GREAT, ANOTHER CALIFORNIAN," but in classic Pacific Northwest passive-aggressive style, he did it with a smile on his face.

See, that's what's great about Seattle. Besides some general hostile feelings toward newcomers, people here are overall nice—in fact, so nice, it makes me realize I've basically been a jerk for most of my adult life (although an Uber driver from the Bay Area once made the distinction that Seattleites are nice but not friendly). Of course, in classic Pacific Northwest passive-aggressive style, Seattleites are also insistent on being nice, even when it makes no sense. Case in point: Twice now a driver has stopped for me at a crosswalk when he/she has had a green light. Most recently, a lady in an SUV stopped at a green light while I was waiting to cross 15th Avenue. I looked at her light (clearly green), then looked back at her, then back at the light, then back at her, with a perplexed look on my face that said LADY, IT'S YOUR TURN, JUST DRIVE. But no! She kept waiting for me to cross. This went on for several AGONIZING SECONDS, until, finally, she threw up her hands, almost in disgust, and gunned it. WTF, SEATTLE.

Don't get me wrong. This isn't the worst problem to have. It's just something that I, as a road-raging, always-in-a-hurry Californian, am getting used to. Here's what else takes getting used to:

FLIP-FLOPS: Guys, what's up with the flip-flops in the rain? Don't your toesies get cold and wet? I actually worked up the nerve to ask my locksmith, who showed up to fix my deadbolt on a recent rainy afternoon in flip-flops, what the story was. His response? Laziness. He also relayed a story about his friend who hunts "sea mammals" in Alaska and also wears flip-flops BECAUSE HE DOESN'T WANT TO GET BLOOD ON HIS SHOES. We'll chalk this one up to WTF, MEN.

GARBAGE CANS: Where are they? Seriously. I've walked blocks and blocks holding something I wanted to throw away because there was no public garbage can. And yet the streets are so clean. I DON'T GET IT. Do garbage cans actually make cities dirtier?

RULES: There are so many of them, and almost everyone seems to follow them (see above). Have you read all the rules on the light rail? I'm pretty sure there's one about being attuned to the emotional needs of others. I'm pretty sure I've broken it. (One sign that's even more disarming—all those "No firearms zone" posters in restaurants and bars.)

PRODUCE: It's expensive and limited. Say good-bye to year-round bounty. Say hello to $5 mangoes and $3 avocados. (You're good on apples, though.)

THE '90s: The dream of Kurt Cobain is alive in Seattle. It's as if the internet never existed. There are actual record stores (even ones that sell CDs) and places that sell film to put inside cameras that you use to take photos with. I have heard Smashing Pumpkins over the stereo at a vintage clothing store. At Sea-Tac Airport during Christmas, I heard Pearl Jam TWICE through the speakers (grunge is apparently Seattle's holy music). While driving between Bellingham and Seattle, I listened to the entire Singles soundtrack (with my bandmates, of course).

HIGH RENT: Everyone talks about it, but as someone from the Bay Area, I have no idea what you're talking about. I've heard people complain about $1,000 a month. To give you some perspective, in a recent article titled "What Kind of Rental Can You Afford?" in Oakland magazine, the "pinching pennies" category started at $1,450 per month. And that's in Oakland. In San Francisco, the median price for a one-bedroom apartment is more than $3,000.

WEATHER: Everyone will warn you about the weather. Yes, it's doom-and-gloomy here in the winter. Yes, it'll make you feel S.A.D. Yes, you may go through a period in which you eat an inordinate amount of carbs and watch an obscene number of reality TV episodes. My advice: Get a hobby, make sure it involves exercise, and maybe buy one of those happy lamps.

SPEAKING OF THE WEATHER, JACKETS: You'll need more than that one you brought with you. Here are, roughly, the different climates of Seattle:

• About to rain, but maybe not

BUT ALSO, SUMMER: Summer in this town is AMAZING. It's warm, and green, and there's water everywhere, and the hiking is glorious. Guys walk around with their shirts off. People hang out in the park till late, when it's still light out. Strangers compliment each other. You will have so many excuses to stand in line for ice cream.

CROWS: They are this city's pigeons. They will eat dried puke off the streets of Capitol Hill (another thing I have unfortunately witnessed twice).

DIETARY RESTRICTIONS: Have one? Congratulations, you've reached the Promised Land. Every restaurant menu will have designations for vegan, vegetarian, and gluten-free options. You may walk into a random restaurant and the entire menu will be gluten-free, just 'cause NICENESS. California, you are so behind.

RACE: If you're any shade darker than tan, you may have an awkward conversation about race with a white person (and that person may be your local congressman).

SMOKING: Still a thing! In the Bay Area, smokers are a dying breed, but vaping is everywhere. Here in Seattle? I've seen entire sidewalks covered in butts.

SEAHAWKS: It's Seattle's other religion. The 12th Man is a reference to their fans. I don't have anything else to say about this matter.

So, in summary, Californians, be nice, have patience, avoid driving if at all possible, and enjoy those long showers.

Comments 60
Tags: Pullout New to Town New To Town 2015
The Stranger depends on your continuing support to provide articles like this one. In return, we pledge our ongoing commitment to truthful, progressive journalism and serving our community. So if you’re able, please consider a small recurring contribution. Thank you—you are appreciated!
CONTRIBUTE NOW