The Lesbian Who Taught Me What My Problem Was

I thought I hated my teacher. Turns out, I hated myself. 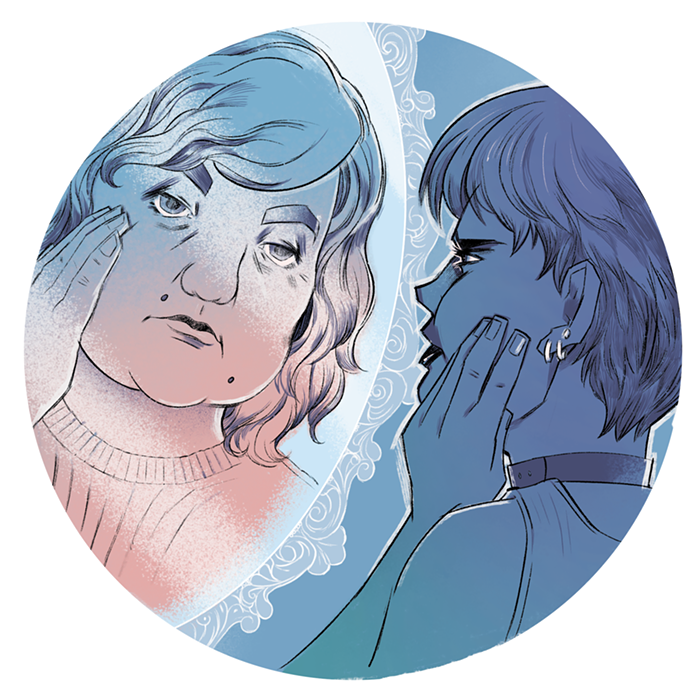 "Is this what happens when you don't get any dick?" I'd joke about her, while turning up the volume on my Melissa Etheridge CD. "God. What a dyke." CURTIS BATHURST

It was my first semester of college at a small state university for people who didn't get into their top choice. I wasn't particularly interested in school, but I was even less interested in making a career for myself as a bagger down at the local Walmart. At least until I met the woman who would be my creative-writing professor. She made being a Walmart bagger seem like a fine option.

My teacher, who I'll call Sandy, wore too-big sweaters, dowdy leather clogs, and no makeup. She looked, most mornings, like she'd picked out her outfit from a pile on her floor. Worse, she usually had a Jeanette Winterson paperback tucked under one arm. She was the first openly gay woman I'd ever met. It may seem unbelievable that I could reach legal adulthood never having met a lesbian, but I'd grown up in a town with a population of less than 3,000 just over the hill from where Deliverance was filmed. Most of the women in my holler would never admit to an attraction to anyone outside their husbands, except maybe for Jesus and Dale Earnhardt.

Until college, the only time I heard the term "lesbian" was when it was in the form of a question. "Hey, you a lesbian?" I'd hear boys sneer in gym class before I looked around and realized that I was the one they were asking.

I never understood this, why I, of all people, was so falsely and unfairly pegged as gay. Sure, I had a bowl cut and was completely uninterested in boys, but this was 1996. Why would you be into boys when women's soccer was finally in the Olympics? I mean, sure, I might have occasionally had feelings about women, but that was normal. Everyone has crushes on their girlfriends—right?

Stereotypes are dangerous, but sometimes they are also true, and Sandy had "dyke" written all over her face. Besides, her sexuality was written into our course syllabus. Our reading list was entirely women who slept with women or looked like they did, from Virginia Woolf to Dorothy Allison, from Leslie Feinberg to Judith Butler. I was appalled by the whole thing, but especially by my teacher, who I was sure spent all of her nights home alone petting her 45 cats.

I never attempted to hide my disdain. I strolled in late and plopped down in the front row, and I slept in class more often than not. I wasn't interested in anything my teacher had to say, and when she gave me feedback on my writing—especially the feedback that essays required transitions between paragraphs and I needed to start using them—I'd say, "I don't believe in transitions," and leave in a huff.

Back in my dorm, I'd say to my roommate, "Is this what happens when you don't get any dick?" while turning up the volume on my Melissa Etheridge CD. "God. What a dyke."

At the end of the year, I dropped out of college for the first of many occasions and started working at a cafe where everyone else—everyone but me—was gay. They'd hired me, I later found out, because they assumed I was one of them. I was not, of course; I was a proud heterosexual. But these lesbians were cool. They were young and hip and had shaved heads and sculpted eyebrows. They weren't lonely. They didn't have cats.

Lesbians, I realized, could be this. Three months later, I was dating a woman.

Those years were the lesbian heyday. Queerness was still somewhat taboo, so when we found each other in small towns or big cities, we really connected. These days, if you nodded to every queer person you saw on the street, it would look like you have a tic—but in those days, when you saw dykes on the street, you made eye contact. You acknowledged them. These were the L Word years, and on Sunday evenings we would gather in the home of the one friend of a friend who had Showtime and watch The L Word in rapt silence, shushing each other if anyone dared to interrupt.

These were my people, I realized—the dykes, homos, and lezzies. And that teacher I'd hated? The one I'd made fun of and called a dyke? She was my people, too.

My wages at the lesbian cafe barely covered my rent, and I'd taken to dumpster diving to supplement my meager caloric intake. So, after a year, I went back to the college and, with no other options, enrolled in Sandy's class once again. I just hoped she wouldn't remember what an ass I'd been.

She did remember, but we never talked about our past, and we gradually came around to something like peace. Or, rather, I stopped being a dick, and she was gracious and professional enough not to hold it against me.

Years later, after I'd graduated from college, moved back and forth across the country three times, and finally started writing full-time, Sandy e-mailed me out of the blue. She had a book coming out, and it included a section about a student who'd almost driven her to quit teaching. The student's name, oddly enough, was "Katie," and she compared this Katie to an abusive ex-girlfriend. If I squinted hard enough, I could see the resemblance.

When her book tour came to Seattle, I went, and I bought a book. Later, alone, reading a chapter about myself, I clearly saw how terrible I had been. But I also knew by then that it had nothing to do with her and everything to do with me.

That teacher didn't teach me how to be gay—a group of radical lesbian baristas and my first girlfriend did that. But she taught me a lesson that has served me well over the years: Sometimes the thing that you hate most in other people is the thing you fear most in yourself. That, and the need for transitions.

• This piece appears in the 2018 Queer Issue as “That One Teacher.” See also: “That One Serial Killer” by Dan Savage, “That One Drag Queen” by Jinkx Monsoon, "That One DJ" by Charles Mudede, “That One Writer” by Sophia Stephens, “That One Coworker" by Trisha Ready, “That One Parent” by Jing Jing Wang, "That One Roommate" by Christopher Frizzelle, “That One Radical Faerie” by Marc Castillo, “That One Songwriter” by Eli Sanders, “That One Filmmaker” by Chase Burns, and “That One Spouse” by Natalie Wood.