It saved my life. It could save yours, too. 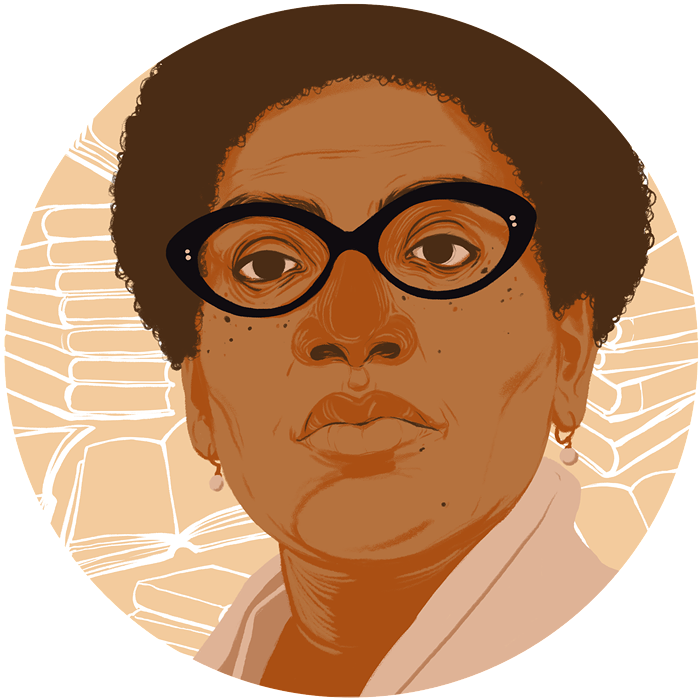 The writing about the sexual assault is brief, candid, and strangely calm—far, far away from the fear that was festering in my chest. E.E. ŠkarEdá

It was hot and stuffy in that college classroom, but that wasn't why my hands were sweating. My fingers were wrapped in a death grip around a tattered copy of Audre Lorde's book Zami: A New Spelling of My Name.

That day in 2015, my ethnic literature studies class had read how a young Audre Lorde was sexually assaulted by the landlady's brother "in exchange" for helping her move into her first Brighton Beach apartment. The writing about the sexual assault is brief, candid, and strangely calm—far, far away from the fear festering in my chest. In the book, I was seeing someone who had been in similar dark corners as I had. I was afraid that my own darkness was leaking through my eyes. I was afraid that if I let go of the book, I would fall apart with it.

Lorde had brought me back two years in time, to the summer after my first year of college. In the span of those three months, I had disclosed my first rape to my family, reeled at the news of my mother's breast- cancer diagnosis, ended an abusive relationship, held my grandmother's hand as she passed away, and gone back to school that fall, only to be raped within weeks of returning.

I know that's a lot. My truth was a burden then, and it was being carried by a dazed, sad, empty-eyed shell. I was volatile, impulsive, scared, and desperate. My truth did not go over well with the police officers who interrogated me about my mental health. They only wanted to hear my diagnoses, not the traumas. When I turned to the hospital counselor at my bedside after my second rape, and told her what had happened, her face changed into a smug smile.

"What could you have done differently, sweetie?"

There are no words to describe how I screamed.

At 21 years old, reading Audre Lorde, I still heard the agony of my 19-year-old self, but it was silenced when a classmate's pencil dropped to the floor. The clatter ended my flashback episode, but I still did not blink. As the clock ticked toward the final moments of class, I saw, fully and clearly, what Lorde had just done.

Lorde was a self-defined woman who lived by her truth, as she wished to tell it. Her legacy as a lesbian, and her love of women, is undeniable. However, for much of her life, Lorde struggled with her identity. She was closeted because of fear, shame, and circumstances. She was a lesbian who was married to a man—Edwin Rollins, a white gay lawyer—and had two children with him before their separation in 1970. Lorde then had a relationship with Frances Clayton, a white academic woman with whom Lorde co-parented her children. Their nonmonogamous relationship enabled her to live openly as a lesbian for the first time.

I am bisexual. I had experienced similar fears about being open about it, and have mostly dated cisgender, heterosexual men because of it. In reading about Lorde's life, I saw myself again. I was still who I knew I was. I was queer—in pain, in love, in recovery—and I was alive.

In awe, I sat there realizing that Lorde's traumas did not stop her. Because she had survived, I could survive. Although I might never be rid of my pain, I could still experience joy, love, and triumph. My life was not hindered by, but actually informed and inspired by, my experiences. Suddenly I could see no good reason to be ashamed for telling my truth and allowing it space in my life.

Lorde called Zami a "biomythography," a word she invented. Biomythographies are a form of storytelling, a way of telling a truth that is accompanied by the mythologies of the self. For Lorde, the truth was an open invitation, a vehicle that welcomed intersectionality, that welcomed invention, that welcomed art. "What I leave behind has a life of its own. I've said this about poetry; I've said this about children. Well, in a sense I'm saying it about the very artifact of who I have been," she wrote.

The translation of Lorde's pain—the pain of being marginalized, victimized, disabled, and queer—into an unflinching body of work is a stunning accomplishment. Very few people can transform pain into love, hope, and healing. Even fewer can transform it into art. Her art invites others in. Lorde's writing brought me into new waters, waters that were deep and filled with the unknown, but there was also a light leaking through—the light of hope and healing—and it was now reaching my little broken, traumatized queer heart for the first time.

Discovering Lorde's biomythography saved my life. For the first time, I realized that telling my truth, and telling it the way that I not only wanted to, but needed to, was possible. Not only was it possible: It had already been done. It already existed. I was no longer afraid of being caught in my own pain, of having my classmates see how hard I was holding onto that poor book. I was going to embrace my pain, and transform it into something useful. I was going to be a writer. I was going to construct a biomythography of my own, my way, and bring others with me.

Zami was the first stone of many on that path, a path of rebirth through writing that ultimately saved my life. I have been told it has saved other people, too. I openly discuss my journey with mental health on my social media, and to those who have come forward to tell me how my openness inspired them to get help, to let others in, I say: Don't thank me. Thank Audre Lorde.

• This piece appears in the 2018 Queer Issue as “That One Writer.” See also: “That One Serial Killer” by Dan Savage, “That One Drag Queen” by Jinkx Monsoon, "That One DJ" by Charles Mudede, “That One Coworker” by Trisha Ready, “That One Teacher” by Katie Herzog, “That One Parent” by Jing Jing Wang, "That One Roommate" by Christopher Frizzelle, “That One Radical Faerie” by Marc Castillo, “That One Songwriter” by Eli Sanders, “That One Filmmaker” by Chase Burns, and “That One Spouse” by Natalie Wood.

Comments 1
Tags: Queer Issue 2018
The Stranger depends on your continuing support to provide articles like this one. In return, we pledge our ongoing commitment to truthful, progressive journalism and serving our community. So if you’re able, please consider a small recurring contribution. Thank you—you are appreciated!
CONTRIBUTE NOW