How a Radical Faerie Changed My Life

Agnes de Garron taught me how exhilarating it is not to be normal. 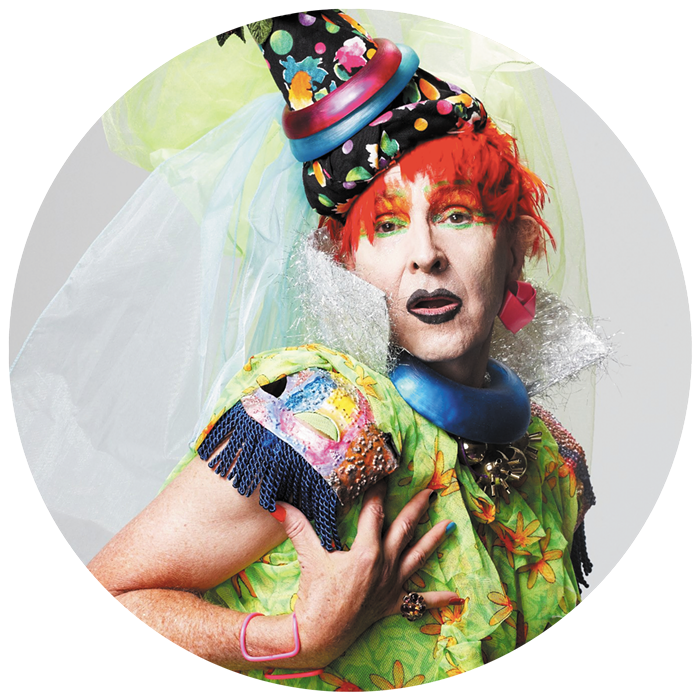 In my mid-20s, I was having a life crisis. I had a great job as a dental assistant, but I was miserable. Though the money allowed me to do what I really wanted to do—showcase art—the job had no creative outlet at all. I was preparing peoples' teeth for a drill.

On top of all that, I was going through a nasty breakup. I'd been living in Portland, Oregon, for most of my life, and I wasn't happy with the city anymore. A friend told me he was moving to New Orleans and asked if I wanted to go with him. It took me some time to say yes because I'm a West Coast boy, but that's also what I was trying to escape. I wanted to get out. So I said yes. I planned on being in New Orleans for a month. Then I met Agnes.

Agnes de Garron was about 75 years old when I met her. She is one of the original founders of the Sisters of Perpetual Indulgence. The Sisters were a trailblazing group of drag performers who played with themes of gender and morality back in the 1970s. They were dressed as nuns, but they also had full beards. They were sweet and hilarious and artistically radical, all while being staunch advocates for the gay community.

The Radical Faeries had just started to form in San Francisco, too, and Agnes was a Faerie from the very first gathering. The Faeries play with gender or nongender, too, but they also incorporate pagan traditions into their gatherings, which often happen in the woods or at clubs and involve a lot of sex and eating and long conversations. They're a hard group to explain because they're always evolving. They're not hippies, but it's very easy to confuse a Radical Faerie with a hippie. You know the Cockettes? Agnes was very into the Cockettes.

She was also in the air force during Vietnam. When she talked about Vietnam, she mainly talked about gay sex. She had a boyfriend who was also in the military, and they were both in Vietnam. They'd sneak off base to go to the ladyboy bars, as she called them. She got a lot of backlash from the queer community at the time for being white and dating a black man. Even among the queer community there's going to be prejudices. But Agnes has always been a radical who thinks outside the box.

The first time I met Agnes, I was filming her at my apartment for a short video my friend wanted to make. We shot clips of Agnes doing mundane things like brushing her teeth and getting dressed. As she talked, I began to realize how involved she'd been in the queer community, how important she was, how much she'd seen. She was alive during the Stonewall uprising. She survived the AIDS crisis.

Five hours later, she was rolling around on my apartment floor wrapped in a windshield sunshade and day-glo clothes. I thought: "This is fantastic. I'm never leaving New Orleans."

I ended up staying four and a half years, mainly because of Agnes. I moved into her place in the Bywater (the queer, artsy neighborhood), and she took me under her wing. She could see I was vulnerable. I was crying all the time. I was in such a cool place, but I was lost.

Even though she was 75 and I was 27, Agnes was the perfect person to show me around the art world, the drag world, and the world world. On a typical day, she'd maybe have on a mango-colored tank top, some green plaid shorts, and some eyeliner and blush—and an angry dog in tow. Her house is full of tutus, headpieces, and dress forms wearing ridiculous outfits. It's like Mardi Gras exploded in her apartment. She's Cookie Monster chic. She's like the opposite of the Chanel effect: Before she leaves the house, she puts six more things on.

I loved her style because I am not like that, but to see someone do it so effortlessly was very moving to me. I've always fit in just enough to pass as "normal," whereas she's like: "Why would I ever want to be normal? Being normal is so boring."

I'd film all of her performances. I'd help her create some of her looks. If she needed someone to dance around in their underwear, I'd do that. But honestly, a big portion of us being friends was just us walking her little dog Poopette along the Mississippi River.

It was a very normal life. I realize when I say that aloud, it's funny and weird to others, but it was a normal life. Or else it taught me that a normal life is not the thing you should strive for. Striving for normal is all about what other people think.

Agnes really stuck to the idea of not caring about what people think. She would do weird things like grow a small patch of beard on her cheek and dye it green. I think part of it was she just liked laughing at grouchy conservative people. But she laughed at grouchy younger people, too.

At one point, my mom saw pictures of me on Facebook hanging out with Agnes and she got suspicious. I tried to explain that this was a really great person who I was learning a lot from, but it's hard to put it in context when you just see a photo of me next to an old man with makeup on. It didn't help that the first time Agnes talked to my mom was when I called her after getting stuck in the mud while tripping on mushrooms during Mardi Gras.

Plus, families have a way of trying to enforce normalcy. But I needed something new at this time of my life, and Agnes showed me the way.

After I met and started dating someone who lived in Seattle, I decided I was going to leave New Orleans, and the hardest part by far was leaving Agnes. Having lived into her 70s, having survived the AIDS crisis, Agnes has seen a lot of people disappear in her life.

I sent her a text the other day saying I was planning to share the story of our friendship, and that I'd learned from her how liberating it is not to be normal. I asked if she had anything to say. She gave me her weight, age, height, current hair color—her stats! That was all she wanted to give me. Which is hilarious. That's exactly the kind of shit she's always done. It was the perfect response.

• This piece appears in the 2018 Queer Issue as “That One Radical Faerie.” See also: “That One Serial Killer” by Dan Savage, “That One Drag Queen” by Jinkx Monsoon, "That One DJ" by Charles Mudede, “That One Writer” by Sophia Stephens, “That One Coworker" by Trisha Ready, “That One Parent” by Jing Jing Wang, "That One Roommate" by Christopher Frizzelle, “That One Teacher” by Katie Herzog, “That One Songwriter” by Eli Sanders, “That One Filmmaker” by Chase Burns, and “That One Spouse” by Natalie Wood.

The Roommate Who Changed My Life

A crush, a gay-bashing, and an unexpected transformation.

He also changed me personally—changed my perception of the world.