The First Gay Pop Song I Ever Heard

What I learned from the Magnetic Fields's "When My Boy Walks Down the Street." 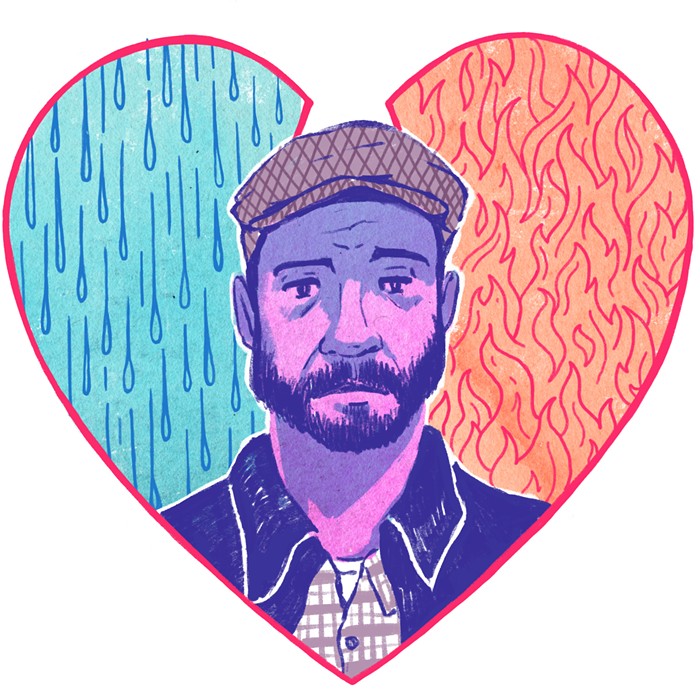 Stephin Merritt has a deep, fetchingly weary voice, and lyrics at once intellectual and hot. LEVI HASTINGS
Tweet

First, understand that the year was 1999. It would be five years before gay marriage was legal in any US state. A gay college student named Matthew Shepard had recently been beaten, tied to a Wyoming fence, and left to die.

I graduated from college in New York, came back home to Seattle, began letting people know I was gay, and listened to a lot of music by the Magnetic Fields.

That year the band released 69 Love Songs, a masterpiece whose preoccupation is evident from the title. The Magnetic Fields' gay lead singer and songwriter, Stephin Merritt, had a deep, fetchingly weary voice, and lyrics at once intellectual and hot. In short, my kind of jam.

I knew what Merritt was talking about. More than that, I was riveted by this baritone male voice singing about plain old reality-bending longing for another guy. "Amazing! He's a whole new form of life. Blue eyes blazing! And he's going to be my wife."

I had never heard anything like Merritt's songs before—or, at least, I'd never realized that I had.

I now know about the history of coded, subtle, and occasionally overt references to gay love and lust in pop music, references that date back to a time long before being out was culturally acceptable. Take "Andy's Chest" or any number of other Lou Reed songs. Take 1975's "Ain't Nobody Straight in LA" by the Miracles. (On side two of that album: the assumed-to-be-hetero anthem "Love Machine.") Or listen to David Bowie, or the Smiths, or Mott the Hoople's "All the Young Dudes."

Merritt's 69 Love Songs was one of those things that a 22-year-old doesn't want to admit he needs, but that everyone deeply needs: a model for how to live.

I can't say what I specifically thought about Merritt's songs at the time, because in all honesty, whenever I try to climb back inside my early-20s mind, I mostly leave still wondering what the hell I was thinking. The answer may be that in a lot of ways, I wasn't thinking. I was feeling, groping, finding my way. Merritt's music helped me get there. When I listen today, I realize Merritt was also trying to warn me of something difficult and true: Desire is fuel and fire, and it is also, unavoidably, in a dance with dissatisfaction.

You learn a lot along the way. A few years after 69 Loves Songs came out, Merritt, the indie love idol, was involved in one of the earliest iterations of an internet-based fight over whether someone (in this case, rock critic Sasha Frere-Jones) was correct to call someone else (in this case, Merritt) a racist. If you missed that one, try Google. The fight began in 2006, faded sometime after that, and was then resurrected by Merritt last year when he released his 25th album, 50 Song Memoir.

Merritt taught me something there, too, something he'd also been trying to tell us on 69 Love Songs: Everyone gets it ridiculously, terribly wrong sometimes.

• This piece appears in the 2018 Queer Issue as “That One Songwriter.” See also: “That One Serial Killer” by Dan Savage, “That One Drag Queen” by Jinkx Monsoon, "That One DJ" by Charles Mudede, “That One Writer” by Sophia Stephens, “That One Coworker" by Trisha Ready, “That One Parent” by Jing Jing Wang, "That One Roommate" by Christopher Frizzelle, “That One Teacher” by Katie Herzog, “That One Radical Faerie” by Marc Castillo, “That One Filmmaker” by Chase Burns, and “That One Spouse” by Natalie Wood.

Goodbye, and Please Come See Me in Your Inbox

Can I Grow Potatoes in a Traffic Circle?