What Happens After the Person You Married Tells You They're Transgender

I'm seeing Pride in a whole new way this year. 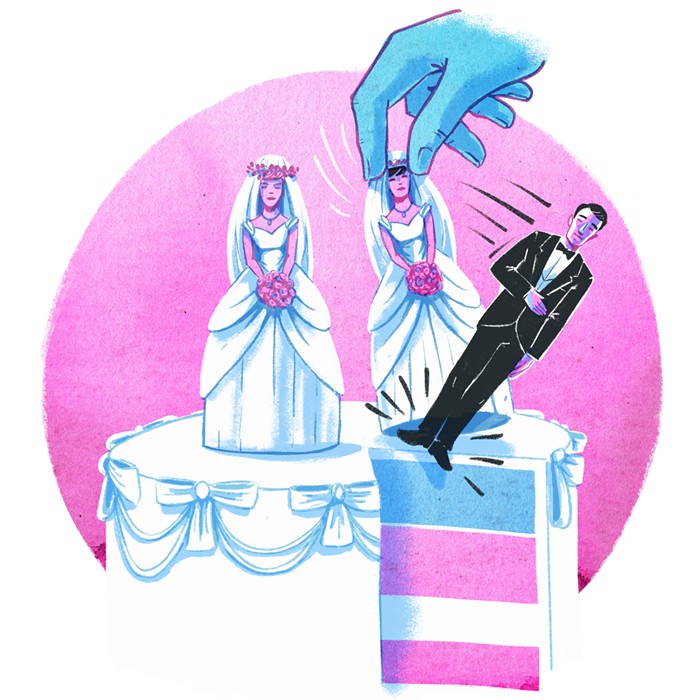 Last September, three days before my second wedding anniversary, I sat on the couch and asked my husband the hardest question I have ever had to ask anyone: "Are you transgender?"

I had noticed some changes in Kyle. He had started to grow his hair out. He was doing it for charity, but then he left it that way. He'd obliged the manicurist and gotten his nails painted for the first time in the five years I've had him join me at the nail salon. He shaved his beard off without me asking and had kept it shaved for several months.

These changes over the course of a summer are not significant. I didn't even notice them at first. They blended into the background of our moving to a new apartment. It wasn't until a camping trip in August, during which Kyle admitted to being very depressed, that these subtle changes took a 3-D form I couldn't ignore anymore. Armed with a hunch and my observations, I asked my significant other, the person who I had signed up to share my life with, if there was meaning in these arbitrary events.

In the most honest and tear-filled conversation we have ever had, my husband confessed to me that they had discovered a part of themselves they didn't know existed before. While they explained the revelation to me, I started on what I didn't know then would be the most difficult and lonely path I've ever known. There isn't an easy Google search for "How does a cisgender straight woman accept her transgender wife?"

In the age of gender revelation, transformation, and growing awareness, there isn't a "how-to" guide for couples in marriages learning how to navigate the reconstruction of gender identity. Being transgender wasn't part of our contract when we got married. I believe fundamentally in the goodness of people. Sitting on the couch as we both cried, both of us completely unsure how to move forward, the only thing I could think to say was that, despite my inability to see into our future, I knew we had to do whatever was necessary to make my spouse, now my wife, the person she was always meant to be.

The next steps in her journey were very clear. She had lived 32 years in darkness, in the shadow built by borrowed ideas of how masculinity should be represented. Now that she was out, I knew not another day could pass without us being serious about how she could live her best life, how she could live in the lightness that comes with confidence in who you are.

Without hesitation and through the good fortune of medical benefits, she, I, and we started therapy. I knew without a doubt that we would need experts to help us navigate this unique and often undocumented territory. From what I can tell in my limited research, many couples don't survive this kind of revelation.

That said, I know enough to believe that no two marriages or people are alike. There is no one-size-fits-all set of solutions for this journey. We have spent the past eight months unraveling the complicated fabric of our identities as individuals, and as a couple, with our families and friends. Preparation for each conversation was doused with substantial amounts of anxiety and fear of rejection. One at a time, we have told those we love that my husband is now my wife.

We've gotten a lot of questions, as you would expect. Some people have been concerned about our happiness. Some people don't necessarily know what being transgender means. Some people still cannot fathom that sex and gender are separate social constructions. This is a painful part of our journey, but we press on. I know with all my being that this is the right path.

Last month, we announced on Facebook that Kyle is now Katie. She started hormone replacement therapy, and I've been blogging about the experience at tisfortrans.wordpress.com. Earlier this month, on a trip to Orcas Island, Katie introduced herself to people we hadn't met before, and no one asked her any questions. No one did a double take. No one even looked surprised. It was really liberating not to be worried about how to tell people that the male body form in front of them identifies as Katie.

Now we are about to celebrate Seattle Pride in a way that we never have before: as members of the LGBT community. Attending the parade and the events around it is one of my favorite annual Seattle traditions. There is an unparalleled energy of love, inclusion, and support. That said, my experience of Pride this year will be a new one: It will be through the lens of someone who newly understands the significance of the T in LGBT. This year, I will participate in Pride as the proud spouse of my wife. That's something I never thought I would say. What a wonderful and well-earned celebration it will be.

• This piece appears in the 2018 Queer Issue as “That One Spouse” See also: “That One Serial Killer” by Dan Savage, “That One Drag Queen” by Jinkx Monsoon, "That One DJ" by Charles Mudede, “That One Writer” by Sophia Stephens, “That One Coworker" by Trisha Ready, “That One Parent” by Jing Jing Wang, "That One Roommate" by Christopher Frizzelle, “That One Teacher” by Katie Herzog, “That One Radical Faerie” by Marc Castillo, “That One Filmmaker” by Chase Burns, and “That One Songwriter. by Eli Sanders.

Comments 11
Tags: Queer Issue 2018
The Stranger depends on your continuing support to provide articles like this one. In return, we pledge our ongoing commitment to truthful, progressive journalism and serving our community. So if you’re able, please consider a small recurring contribution. Thank you—you are appreciated!
CONTRIBUTE NOW