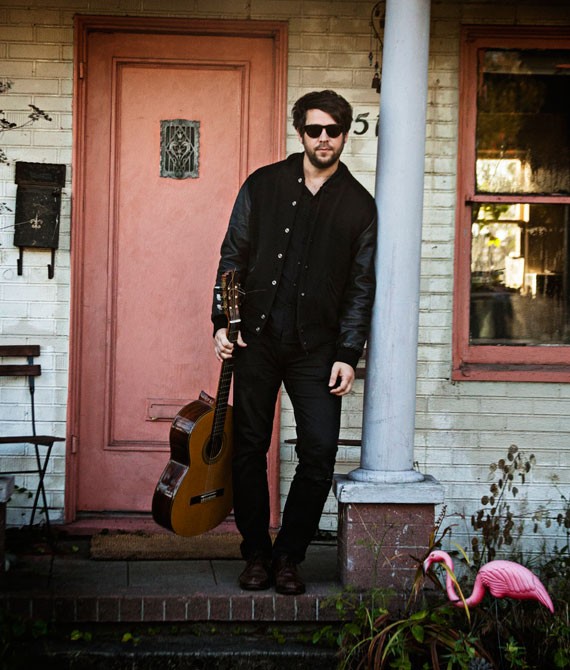 Ford has been the backbone of Seattle’s sub-underground-rock scene for 15 years. matthew toles
Tweet

Incense burns, red wine flows, and the eldritch prog-folk sounds of Catherine Ribeiro + Alpes' Paix fills the house. Matthew Ford, 38-year-old drummer for several great Seattle rock bands and the mastermind behind the fascinating and enigmatic Yves/Son/Ace solo project, is ready for his first goddamn interview. There's so much catching up to do.

ON SALE NOW!
Join Nancy Wilson and the Seattle Symphony on July 9 for an evening of rock'n'roll streamed live from Benaroya Hall!

Ford has been the ramrod-straight backbone of Seattle's sub-underground-rock scene for 15 years. On top of his Yves/Son/Ace excursions, he's contributed spectacularly unslick rhythmic ballast to Pyramids, the Intelligence, Factums, Love Tan, Evening Meetings, and Dreamsalon. The reason you probably don't know about him is because he keeps his profile like he manages his sonic fidelity: low. Humble almost to a fault, Ford—a fine-arts painter who paints houses for a living—seemingly would rather geek out over his excellent record collection than talk about himself. (His Ballard abode is packed with collectible LPs and tapes, including a large stash of Ocora and Folkways recordings.) Having shared a couple of DJ bills with the man, I can vouch for Ford's deep, vast knowledge of obscure, strange music.

Ford's immersion in music's weirder realms tints his own creations, but not blatantly. In his group configurations, he smudges the templates of the scrappy, quirkily catchy rock of the Fall, Swell Maps, and the Godz; evokes the subliminal menace of Suicide; and emulates the no-frills, efficacious drumming of the Velvet Underground's Moe Tucker. The alienated angularity of no wave and the off-kilter, ramshackle structures of post punk also bleed into Ford's groups' sound. There's just enough "normality" in the melodic contours and beats to snag your ear, but the analog granularity and hypnagogic haze in which they're recorded cast the songs into a garage-rock twilight zone.

Ford grew up in the Chicago area and started drumming in high school at the behest of his metalhead friends, due to his beatboxing prowess. Soon after, Ford bonded musically with classmate Dan Strack, a great guitarist who would eventually move to Seattle and form Factums with Ford and Jesse Paul Miller.

"I sucked at skateboarding in high school," Ford says. "And once I started playing drums, I thought, I'm just gonna commit myself to that and gave up skateboarding. I got sick of wiping out on concrete."

"In high school, I was so against bands," Ford continues. "I was more into doing out music and recording four-track stuff with Dan. We'd get together and totally zone out. I didn't even care about structure then. I was into the obvious punk stuff, but for some reason, when it came to playing music, I didn't care about playing songs."

While working at a car wash, another metalhead buddy introduced Ford to Miles Davis's Bitches Brew and kick-started his infatuation with jazz. "I started playing pretty seriously when I got into jazz," Ford remembers. "Still, I always loved Black Flag and the Germs and the shit I grew up with—the Cure and the usual art-fag, gothic stuff."

After graduating from high school, Ford studied film at Columbia College in Chicago. He later moved to Seattle to attend University of Washington's art school; oddly, his love of jazz dissipated once he moved out of Chicago, although he says he'll never lose his fondness for Sun Ra. At UW, Ford met Craig Chambers and they formed Pyramids in 1997. They immediately jelled. It would be the start of a musical relationship that lasts to this day; Chambers—a mainstay in the Lights—has also played in Love Tan, Evening Meetings, and Dreamsalon.

Those early days in Seattle were feverish, productive ones for Ford. The chronology and band family tree get as gnarled as the music they were grinding out, but shortly after starting Pyramids, Ford replaced Dean Whitmore as drummer for the Intelligence and added his robust skins-pounding to Icky Baby and two other releases by the future Stranger Genius Award winners.

A European tour with the Intelligence inspired Ford to take his other bands more seriously. He quit the Intelligence to focus on Factums. "Factums is way more out there than the Intelligence. You can see my roots of not really wanting to make a perfect pop song, but still sort of always trying," Ford says, laughing. And then, right after Factums received an offer to cut an album with the esteemed Siltbreeze label, Strack moved back to Chicago. Ford felt cursed.

But he didn't mope. Factums continued as a long-distance recording project, and around 2004, Ford flung himself into Love Tan and started his solo outlet, Yves/Son/Ace. To realize the latter's skewed, netherworld pop, Ford built a studio in the basement of his home (it cozily sits next to his clothes-designer wife Gwen Stubbs's sewing studio). The tiny space houses a cornucopia of cheap, old tape decks, cheap, old keyboards, and cheap, old drum machines, plus a Fostex F-15 four-track, a minimal drum kit, three guitars, and a bass. "I can't afford fancy equipment because I buy too many records," Ford says.

From these ragtag, vintage analog tools, Ford forges some of the city's most compelling lo-fi, odd ditties. Mounted to the studio wall is a shelving unit storing dozens of cassettes containing sessions from Ford's myriad projects. One glance around this room, and Ford's peculiar sound world starts to make (non)sense.

"Yves/Son/Ace has some of its naive qualities still to this day that I don't even want to overcome," Ford says with characteristic modesty. Besides drums, Ford plays keyboards and guitar, but he admits his technical shortcomings on those instruments, lamenting his inability to master barre chords. Nevertheless, he turns those limitations into advantages, wringing maximum otherness from his gear while thoroughly knowing its loopy parameters.

"I have a wide range of what I do and what I like to listen to," he continues. "I guess I'm trying to put it into a more palatable pop record, even though they're not really pop records."

Along with Y/S/A, Ford is now spending much of his spare time with Dreamsalon, the raucous garage-rock group featuring Chambers and former A Frames bassist Min Yee that spawned from Evening Meetings after ex–A Frames guitarist Erin Sullivan departed the unit. So prolific are these guys, there's still an Evening Meetings album in the can on top of unreleased Dreamsalon and Y/S/A full-lengths. "Maybe I just suck at editing," Ford quips when asked about his prodigious output.

But more seriously, Ford contends that his bands have always had an uncanny chemistry that allows their studio magic to spontaneously arise. "We'll all come [together] and have a sort of weird séance and something pops out."

Although he has influential fans in the biz like the Intelligence's Lars Finberg and Thee Oh Sees' John Dwyer, Ford is resigned to never making money from his music.

"I'm not getting out there; I'm not pushing the stuff. I've never felt like 'I gotta show people how entertaining I am.' I don't fucking care. I just compare myself to that last awesome record I heard. 'Oh, yeah! I wanna do something like that.' I need to do something zoned-out and dreamy like Catherine Ribeiro. I'll get inspired by a record and try to emulate it, but it never comes out how I think it will."

Our Top Eight Recommendations Around Seattle This Week 🏳️‍🌈