Should You or Shouldn't You Eat a Pork Face? 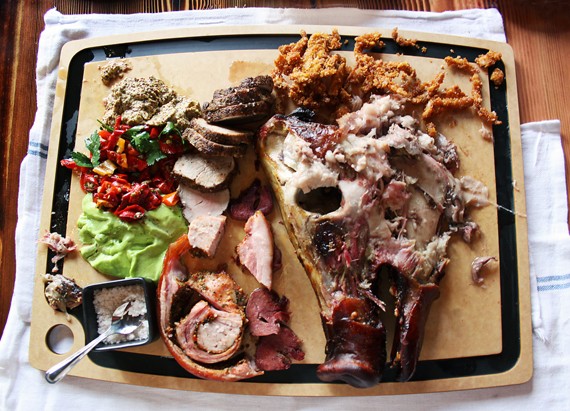 There were a lot of leftovers. We left the head behind. Kelly O
Tweet

My father declined to go eat the pig face with me. On the phone, we discussed what you could eat of a pig's head. There might be some crackly skin. The meat of the cheeks, the jowls. "Maybe the tongue, if it doesn't get too tough during the roasting?" I said. My father grew up on a modest cattle ranch in Eastern Washington, and my family visited my grandmother there one weekend a month as she continued to raise cattle until she was 78 years old. Eating a pig head, it turns out, is something my father does not feel the need to do.

I located two other willing people—the smoked half pig head at Radiator Whiskey "feeds 2–3 people," costing $40—and called the new restaurant, across the hall from its sibling, Matt's in the Market. If you'd like to eat the face of a pig, it is advisable to call ahead.

"Let me check the pig head situation here," the man on the phone said.

A few nights later, the half pig head was placed in front of us, lying cheek side up. It rested on a large cutting board, with two dish towels under that. We were armed with sharp knives, big metal tongs, and skinny implements with a few tines on one end and a narrow spoon-shape on the other. Was there a particular way, we asked, we ought to do this? You want to just peel back the skin of the cheek, the server said; then there was other meat to be found pretty much all around.

The snout was right there, with a few little whiskers intact. The skin was burnished deep brown, hard as a rock; it peeled off more like a shell, in pieces, with a plate provided upon which to set these pieces aside. Underneath were striations of fat and meat; the cheek was very fatty, the meat quite pale, and dissolvingly soft, and not strongly flavored by smoke or anything. It tasted neutral, neither good nor bad. There was a lot of cheek meat. "It keeps on giving... the giving pig," someone said.

Behind the snout, the meat was darker pink, hammy-tasting, soft and flossy. Behind the jaw, more melty-soft meat; the jaw was there, intact, with teeth. Pigs do not practice good dental hygiene. The eyeball was there, too, sunken in rather deep; it was extracted in pieces, "like a botched Groupon surgery," someone said. Everyone ate a little bit of eyeball. Again, just soft.

After a while, we turned it over. The back side was more blackened. The brain was absent. The teeth were yet more evident. Someone pulled a strip off the jaw and chewed on the end. "Gum jerky," he said.

The tongue, it turned out, had wisely been braised separately, and a line of deep-pink cross sections of its musky, unsettlingly tender meat was laid out on the board, too. "It's always weird eating another creature's tongue," someone said. "It's just like French-kissing, but across the veil," someone else replied. The ear was also wisely cooked separately; subjected to smoking, it would've been as tough as the kind you get for a dog at the pet store. It'd been cut into very thin strips, dipped in a cornflake-crust batter, and deep-fried, making it taste as good as almost anything thin-sliced, cornflake-crusted, and deep-fried would.

Some non-head meat was also included on the platter: pale slices of roasted pork loin with a peppery crust; a large cross section of porchetta, which is all kinds of pieces of pig wrapped up together, featuring more fat and an outer ring of crispy skin. There was also a large blob of basil aioli, at least a full cup of stone-ground mustard, and a pile of pickled peppers.

All this would serve at least four people, if you could find that many people who could even stand it. None of it tasted especially spectacular. Even less per person would be more than plenty: The eight huge-shouldered men at a neighboring table could've had just one as an X-treme appetizer, then been able to say they did it, upload their photos, and still have some other, non-pig-face food. There might be a fight over the eyeball.

Radiator Whiskey recommends that you have their apple salad with a sweetish sherry vinaigrette ($10) with your pig head. It was good, and so was a beet salad, which comes with a ton of horseradish crème fraîche, lest your cholesterol go down momentarily ($10). A mountain of plain, steamed broccoli would probably be the best accompaniment. Directly afterward, I had a vision of a whole peeled grapefruit wrapped in crisp, cool lettuce leaves.

A little while longer afterward, there was queasiness, both physical and ontological. The modern urban body is not calibrated to handle this much pork and fat; different parties reported various digestive issues at varying times. More lingering was the feeling that we'd taken part in end-stage meat sports, an endeavor that would predictably enrage PETA and, just as predictably, cause the eight huge-shouldered men to say "Duuuuude!" and, in the end, make everyone feel at least a little queasy in one way or another.

Those who have already confronted the face of their meat—my father, for instance—don't want or need to eat a pig's face at Radiator Whiskey. Those who are disgusted and outraged will never try it, though it might be meaningful for them to do so. Those who just want the bragging rights could be said to be missing the point, except: Who can say what the point is, exactly? The pig heads come from Kapowsin Meats in Graham, Washington, but you won't find that fact, or the sourcing on any other meat, on the menu.

The nose-to-tail ethos is a sound one; if you're going to eat meat, you should make use, as much as you can, of the whole beast. The "meat trend" in general, on the other hand, has been laboring along for some time now, and it's time to move on. A magazine writer e-mailed me in April about "the meat of the moment" in Seattle; I said that the whole thing has cycled around so many times that it's become meaningless, if it ever had any meaning in the first place, and that conscientious eaters here just want high-quality, humanely raised, local meat, and they're willing to pay more for it and eat less of it in the service of avoiding the factory-farmed stuff. I said, maybe wishfully, "Meat: It is now officially post-trend. The end."

Radiator Whiskey is high-ceilinged and has a pleasant American pub feeling, with Johnny Cash playing and tools hung up on the walls. The menu is centered, purposefully, on brown liquor and on meat—you can get a fried pork shank, turkey drumstick confit, a lamb-neck sloppy joe, pork cheek stew ($13–$16). You can get fried beef-lip terrine ($10), which is like the meat version of tater tots. A plate of asparagus ($10), recently, came with big slabs of house-cured Canadian bacon piled on top. It does not feel like a current menu, either for springtime or for 2013. Those who like meat will like it. And those of you who truly want to eat a pig's face—you know who you are, and now you know where to go.

It's a Place for Steak