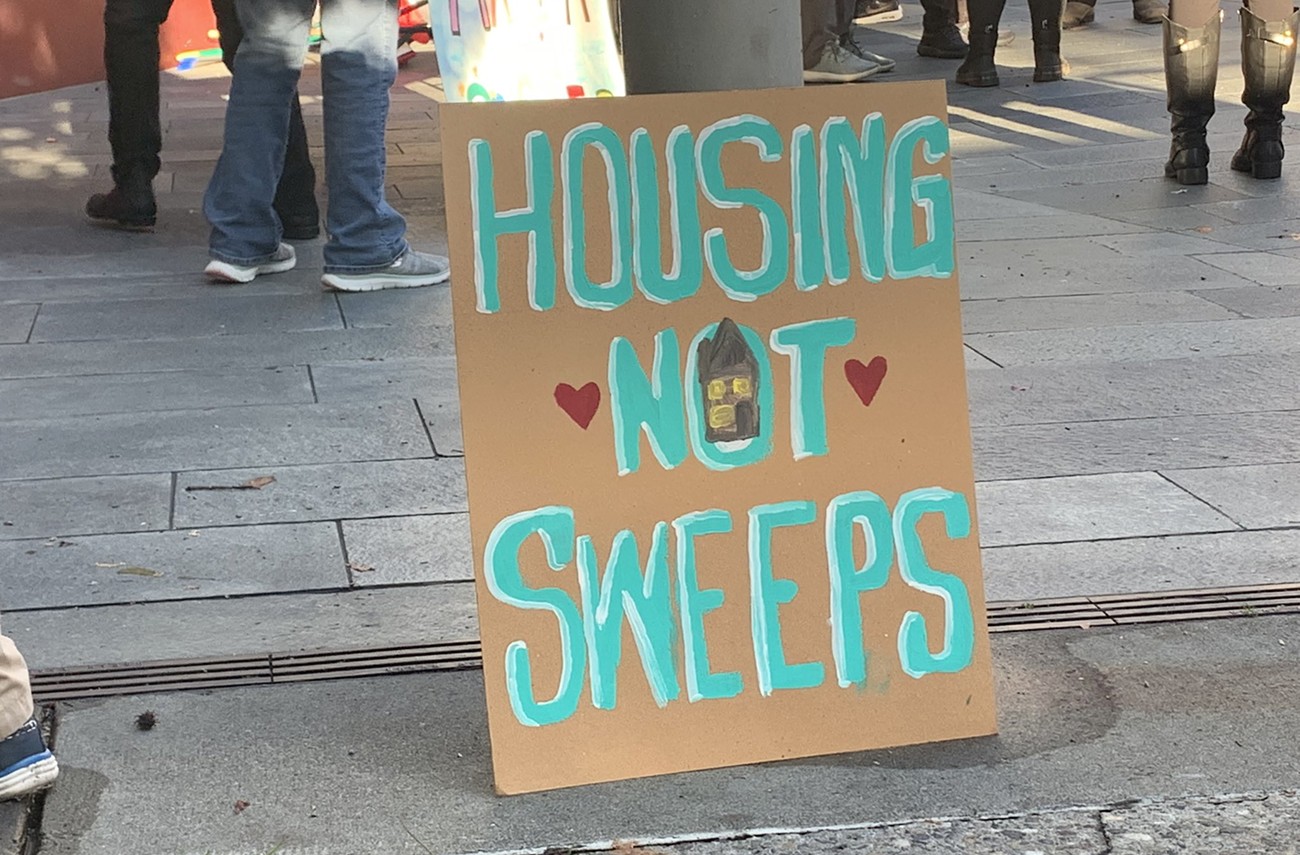 Oh, we are DONE-done with summer: It's only gonna get colder and wetter. Stay safe out there.

Roads may be icy this morning, especially in the south sound where temperatures are close to freezing. Beware of Black Ice! pic.twitter.com/HKxJZDj8yH

Services, not sweeps: Organizers from the Solidarity Budget and other lefty advocates gathered outside City Hall last night to demand that the City revise Mayor Bruce Harrell’s budget to fund “services, not sweeps.” That means they want the City to reroute millions proposed for encampment removals to fund affordable housing and enhanced, non-congregate shelter options such as tiny shelters.

WATCH: In the video below, an organizer from Women in Black, a group that stands vigil for unhoused people who die outside, said that sweeps do nothing to solve homelessness and only put people in danger. To illustrate that point, organizers from Stop the Sweeps used brooms to brush red paint over the names of people who died outside during the Harrell administration while wearing name tags that read “SPD,” “Harrell Admin,” and “City Council.”

An organizer from women in black demands that until the city provides places to live, stop sweeping people to death as organizers use brooms to sweep red paint over the names of unhoused people who have died under the Harrell administration pic.twitter.com/ipsIDoHRQa

Stop the sweeps: In addition to budgetary changes, the lefty homelessness organizers support Seattle Human Rights Commissioner Matthew Mitnick’s legislation to condemn the City’s relentless sweeps. The legislation also includes the Solidarity Budget's demand to cancel all funding for sweeps. The commission will meet tonight at 6 pm. I’m sure it’ll be a doozy.

Okay, what’s the state gonna do? Governor Jay Inslee wants to make homelessness a priority in the 2023 legislative session. After establishing his sweep slush fund earlier this year, I'm surprised that his ideas aren't half bad. In the immediate term, the Governor wants more shelter options. He also wants to start propping up more affordable housing. To do that, he said the state will need to change our very bad zoning laws and allow for faster permitting. The man is speaking my language.

How can you help the governor? Not to be an infomercial, but, for me, zoning is one of THE ISSUES on the ballot for the legislative races this election. The Stranger Election Control Board took great care to sniff out the NIMBY candidates in many legislative districts, so check out our endorsements to make sure you are voting for the most pro-density legislature possible.

Trouble in Talaris: Whenever I read about the Talaris site, I always think its that blue thing from Doctor Who. But it is not. The Talaris site it a 17.8-acre chunk of land in Laurelhurst that may be redeveloped to add 48 single-family homes. Not to get political, but that’s so fucking stupid I could scream. We are in A HOUSING CRISIS. You know how much HOUSING we could put in 17.8 acres? A lot more than 48 single-family homes. But that's just my opinion. Read about the conflict over what to do with this land over at the Seattle Times.

Uh oh: Dave Chappelle and Chris Rock added a Seattle stop to their comedy tour. Last time transphobe Chappelle came to town, area trans leaders called his show a “huge slap in the face,” according to the Seattle Times.

Speaking of transphobia: Right-wingers are dumping millions of dollars into anti-trans ads in swing states. According to NPR, most voters actually don’t view trans issues as a top voting priority. But, hey! That’s the Republican party for ya. A death cult of completely out-of-touch, fearmongering bigots.

Other Republican strategies: The right wants you good and scared (and strapped, obviously) before you head to the polls. But, to be fair, the Democrats also want you scared that you’ll lose your rights to bodily autonomy, which they already let happen for so many people.

A quick primer on crime coverage:

1) Just as people began paying close attention to the midterm elections, Fox and right-wing media outlets went all in on crime. pic.twitter.com/0g196mJDdo

Please take him for all he’s worth: Jeff Bezos’s former housekeeper, Mercedes Wedaa, is suing the billionaire over racial discrimination and extremely shitty workplace conditions that forced her to work up to 14 hours a day without breaks.

Trump v. Attorney General: The lawsuit-happy Former President Donald Trump just filed suit against the New York Attorney General for allegedly harassing and intimidating him. But really it’s just to block the Attorney General from getting important documents. He probably feels the pressure building as one of his close advisors prepares to testify under immunity in the Mar-a-Lago investigation.

Potential failed assassination: Today, at a rally just out side Gujranwala, Pakistan, a gunman shot the country’s ousted ex-Prime Minister Imran Khan in the shin. Khan’s party called the shooting a failed assassination. The gunman also killed at least one person and injured two others. Read more here.

The beef continues: Yesterday, Elon Musk and AOC got in a little tizzy, feuding over the monthly $8 Musk wants to charge for journalists, public figures, and others to verify their identity on Twitter. AOC tweeted this morning that the app "bricked up" on her following their online argument, which she said doesn't seem very "free speechy."

Yo @elonmusk while I have your attention, why should people pay $8 just for their app to get bricked when they say something you don’t like?

This is what my app has looked like ever since my tweet upset you yesterday. What’s good? Doesn’t seem very free speechy to me 🤔 pic.twitter.com/e3hcZ7T9up

This made me laugh: According to daysoftheyear.com, today is both national sandwich day and national housewife day. Imagine being someone who takes national days seriously and wanting to be celebrated for being a housewife, but then your weirdo husband asks you to make him a sandwich to celebrate the OTHER national day. Poor planning.

A song from Oliver Tree: