The Mystery Behind a Creepy, Hilarious, Official-Looking Sign About a "Plague" That Appeared in Ballard Recently 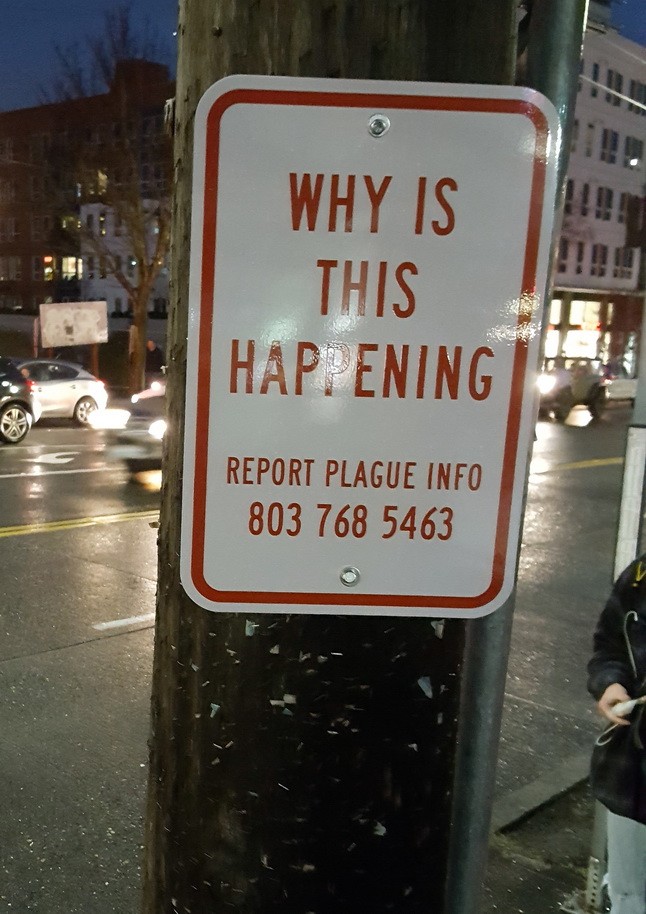 A Stranger reader snapped this pic a few weeks ago. Barry Luke

We got a letter to the editor recently from someone named Barry Luke, who said he'd recently moved to Seattle from Florida. He saw a sign in Ballard that caught his eye and confused him, and he "wanted to share in case you all know something about it." He added:

The attached picture is on a light pole in Ballard, at the #44 bus stop at Market Street. The phone number is a South Carolina area code and the number comes back to a very strange web site.

We exist to serve our readers, so I looked into it.

The first time I called the number—on January 19—I reached a dead end.

I wrote back to the reader who'd sent it to us to ask if he had ever gotten through to anyone. Meanwhile, he'd been doing some detective work of his own. His response:

When I Google the number, one of the hits I get back is “enjoy ur gvmnt”... That links to a web site: www.fedgov.website (which is a very poor attempt at spoofing a federal government web site). When you go to that link, it’s a pretty bizarre web page with HTML code spilling across some text and there are some references to calling the “rot line” (note, not the “hotline”) to report dead rats and a note that Zombies are not real (yet)… I can’t tell if the web site has some local connection to Seattle or if it is in Newberry, South Carolina (where the phone number belongs based on the area code). I tried to make a comment on my Facebook and include the link, but Facebook blocked the website URL as non secure.

We tested that URL just now in The Stranger offices, it appeared secure, and the link posted easily to Facebook.

In any case, he went on to ask:

So, how does a crazy man’s web site with a South Carolina phone number end up on a metal/professional sign mounted to a pole at 15th and Market? If you look closely at the picture, the sign is attached with sheet metal screws (meaning you can’t just take a screw driver and remove it, you have to have the right tool). So, someone went to quite a bit of trouble to produce the sign and install it. I can’t imagine that this intersection is the only place they would do this…?

He's right, the website is crazy. On the landing page, the menu options include "secession info," "emigration policy," and "'plague' info."

Under the pixelated flag, it continues (using questionable grammar, spelling and punctuation):

now is not th time to run away from our problems time to unite and work together toward our many opposing goals.

where are u even going?

Anyway, I was looking for "plague info," so I clicked on that link and found: 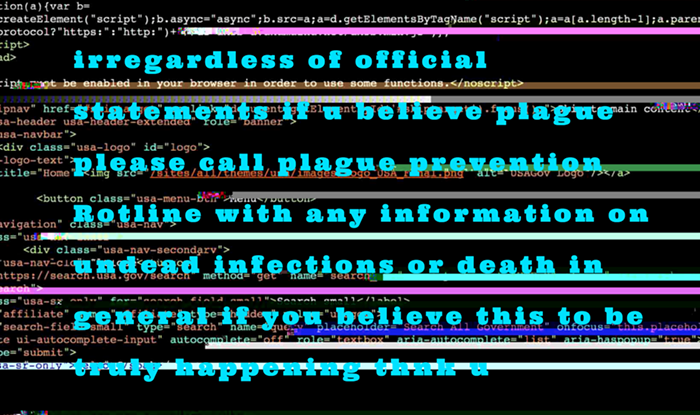 The same number on the sign seen in Ballard. I tried calling the number again today, and it wasn't a dead end. The first sound that came through was smooth jazz, and then the chipper, officious voices of a man and a woman began speaking over the background music.

Here's a transcription of what I heard:

WOMAN’S VOICE: Welcome to the US government’s plague prevention rotline. We appreciate you taking the time to call, when you probably have so little time left.

MAN’S VOICE: Why is this happening? Why does this country hate itself? Why is everyone angry and sad? Why are dead people killing alive people? And why is the economy not very good?

WOMAN’S VOICE: In these difficult times, it is easy to get discouraged. It is easy to give up. It is very easy, and we recommend it.

MAN’S VOICE: However, some of you refuse to surrender to entropy and the inevitability of death. Some of you believe we can actually cure the plague. Therefore we are legally obligated to try.

WOMAN’S VOICE: We need your stories. With enough of them combined, your unimportant lives may add up to something valuable. Let’s cure the plague together.

MAN’S VOICE: If you know someone who has been infected, press 1. If you yourself are currently infected, press 2. If you would like to report a miscellaneous observation, press 3.

How could I not play along? I pressed 1.

WOMAN’S VOICE: We are sorry for your loss. The best way to honor a loved one who has passed on is to convert their death into useful data for the US government. First please tell us how this person encountered the plague.

MAN’S VOICE: If your loved one was bitten by one of the dead, press 1. If your loved one died of natural causes, such as disease, heart failure, gunshot wounds, strangulation, exsanguination, defenestration, or other violent injuries, please press 2.

WOMAN’S VOICE: This is truly the hardest scenario for the family of the victim. Forced to let go twice. Two deaths in one. The false hope of the plague. We will add your grief to our database.

I couldn't help but wonder what actual authorities think of the sign. Were they having a laugh, too?

I called a public information officer at Seattle Department of Transportation, and forwarded her the picture at the top of this post, and she said: "I've seen this before." Maybe she had seen it on Reddit? Or just walking around? I also asked her about the legality of putting up signs like this, and she said she was going to look into it and get back to me.

While waiting for her response, I was clicking around on the fedgov.website and found this pixelated image with the broken-up word "PATHETIC" on it.

As my mouse hovered over "PATHETIC," I discovered it was a hyperlink. 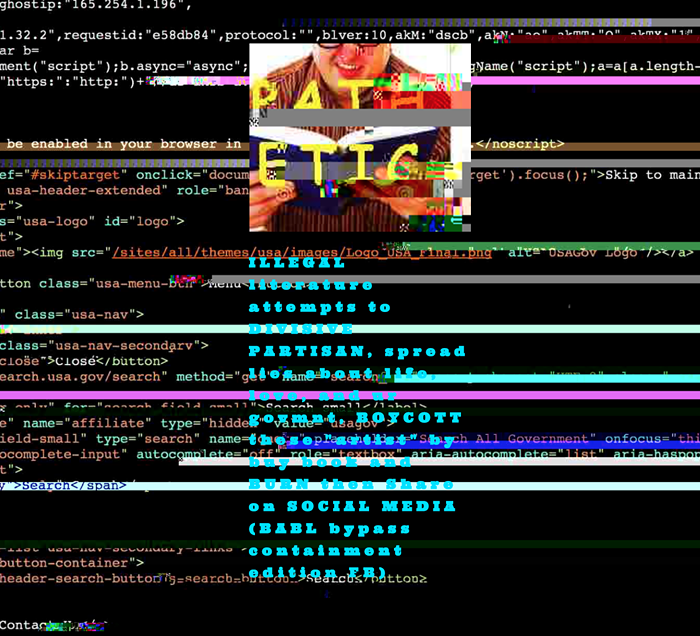 And clicking on the link solved the mystery! Mostly! I think!

The link goes to the website of Isaac Marion, the local author of a zombie novel called Warm Bodies. According to his official bio:

Isaac Marion grew up in the mossy depths of the Pacific Northwest, where he worked as a heating installer, a security guard, and a visitation supervisor for foster children before publishing his debut novel in 2010. Warm Bodies became a New York Times bestseller and inspired a major film adaptation. It has been translated into twenty-five languages. Isaac lives in Seattle with his cat, Watson, writing fiction and music and taking pictures of everything.

The bio goes on to say:

This is definitely the guy.

In other pranks, he recently staged "an imaginary attack" from Donald Trump on Twitter.

Donald Trump attacking him and calling him a terrible writer on Twitter was plausible enough that people believed it, according to Marion. As he wrote in a blog post I found:

What happened was a lot of people who knew nothing about me saw that tweet and, assuming I must be someone worthy of Trump’s notice, believed it fully and rushed to my defense. They spread it around and added their own commentary and when it dawned on them that this was all a joke…they got mad.

Oh boy did they get mad.

My mentions became a stream of hate—not from Trump supporters but from outraged progressives.

He did an AMA five days ago in which he takes all kinds of questions, mainly about his zombie fiction and his experience of watching his fiction be turned into a movie. I didn't see any questions in there about strange signs in Ballard, though there were plenty of questions involving his cat Watson. An example: 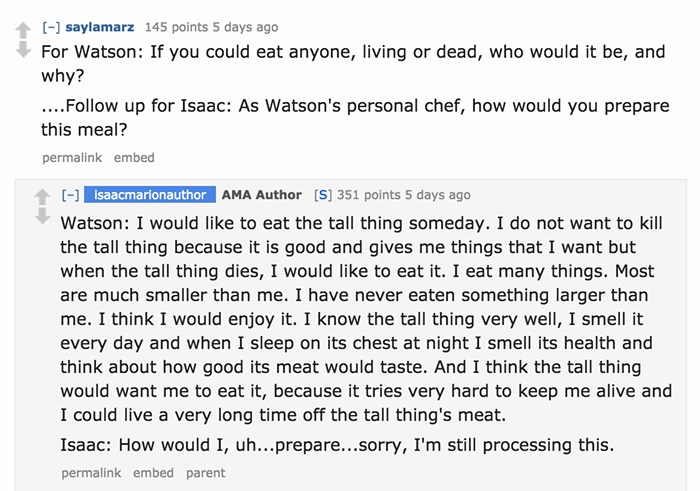 Clicking around on his Tumblr just now, I found this possible explanation for the sign in Ballard:

Tonight I was texting a lady and I said listen I need your help for some illegal activities and she said oh really well I’m game and I said we have to dress up like county workers so you’ll need some very ugly clothes and she said well as long as I can wear cute ones underneath haha and I said it’s ok I’ll bring the ugly clothes and you can change in my van and she said ok sounds good haha and when I met her at the bar and said ok let’s go do this it was revealed that she thought we were just bantering the whole time and did not realize that no I very much needed her to serve as a lookout during my illegal activities around the city and she was emotionally unprepared. Sometimes tone doesn’t come across in texts.

I'm also waiting to hear back from SDOT. 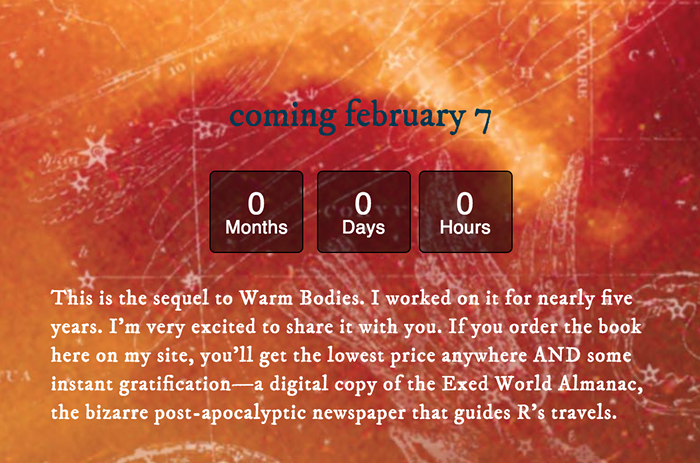 This guy's so clever I can't help but recommend anything he touches: Click here to buy it.

More details about all of the above as I learn them.